Curly’s Secret - "One Thing?"
This great article courtesy of Shannon McKay - www.superpup.co.za :  www.mckaynine.co.za
This article first appears in All About Dogs February 2011 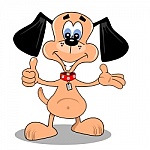 ​Remember the movie City Slickers where Jack Palance’s character Curly talks about the secrets of life all coming down to “one thing”? It seems like such a wonderful premise – if only a person can figure out this “one thing” then all else falls into place. Fanciful perhaps, but maybe ‘ol Curly wasn’t far off the truth.

Over the years I have often witnessed dogs of similar breeding with similar training histories behaving completely differently under various circumstances. Some are great dogs with happy friendly natures, but well aware of boundaries, while others are total hooligans that cause their owners to prematurely resemble a “saddlebag with eyes” such as dear Curly.

Is it possible that there could be “one thing” which is the secret to having a well behaved and likeable dog? If so, what is this “one thing”? Is it the breed of the dog, the  breeding of the dog, training, home environment, genetics, the owner’s attitude or just a random “gift from the gods” that causes a dog to be a really nice chap?

I’ve wrapped my head around this riddle for a number of years. At first I thought perhaps it is training which is the “one thing” but nope, it’s not that simple. I’ve seen many dogs over the years that are exceptionally well trained and have attended training from an early age, but they are not necessarily friendly or well behaved. Just because a dog can perform all kinds of incredible obedience feats does not make him a nice dog. On the flip side of this argument I’ve encountered many dogs that have never had a day’s formal training in their life, yet they are amongst some the nicest most agreeable canines I’ve ever met. Training certainly has its place, but the power of training cannot entirely overcome genetics or the owner’s attitude at home.

The breed of dog also plays a large role, but again I have seen breeds that one would think would be totally unmanageable in certain homes being absolute angels. Likewise I’ve seen dogs that one would think to be perfectly suited to a particular home turn into whirling dervishes that cause their owners considerable grief. The breeding of the dog also plays a role – a well bred pup is of to a far better start to be a suitable canine companion than a pup that has been puppy-farmed. However again I have seen well bred dogs being not so nice and puppy-farmed dogs being ever so nice. The choice of breed and how a puppy is bred and raised both play an important role in how the pup will turn out, but again they are both at the mercy of the owner’s attitude.

And that brings me to my “one thing”, which is the owner’s attitude. This is not exactly an earth-shattering realisation – we’ve known this for ages. But what exactly is it about the owner’s attitude to their dog that makes the difference? After years of mulling this over and informally testing my ideas, I have finally arrived at an idea of what the owner needs to do to get the best out of their pup. It’s what I call Curly’s PRP – persist, reward, prevent.

It doesn’t sound very nice, but owners that persist are generally the type of owners with the most relaxed dogs! These dogs know that if they are requested to do something they will end up doing it – resistance is futile. It is entirely possible to accomplish this without force or intimidation.

To use an example I once had a Great Dane puppy that was a real character. Sweet as anything, but a real mind of their own (this is a gloating parent’s way of saying that their “child” is actually a wilful little rug rat). One evening I took said pup outside for a toilet before we retired for the evening. When it was time to go inside pup was otherwise occupied with stalking snails or something else equally fascinating to a Great Dane puppy. I called pup and received no response. Zero. Zip. Nada.

My options were: a) persist on the puppy coming to me b) cave and go to pup and possibly end up playing chase around the garden or c) leave pup outside and go to bed. The latter was tempting, but I decided that because I had asked puppy to come to me, puppy would oblige (being a control freak is especially useful in being persistent). I knew puppy loved going in the car, so I opened the garage door and the car door. The sounds of an anticipated car trip were enough to draw pup away from the intriguing snails and into the garage. I then simply held onto pup’s collar and led them back into the house. No fighting, no flapping and no compromise. I persisted on my request and managed to get pup to oblige without being forceful. As I always say to my dogs “Listen to me guys. Whatever I ask of you, you know it’s going to happen. It’s going to be nice, but it’s always going to happen”.

Being persistent gives your dog a tremendous amount of security. It’s pure and unadulterated consistency and I believe it’s an integral part of creating a nice dog. Dogs that have consistency in their lives are more stable, less anxious, less demanding and generally a lot more pleasant to be around.

When a dog complies with our request he must be rewarded. It’s as simple as that. In early stages of teaching a food reward is invaluable but there are many other rewards that can be used. We must think of rewards from the dog’s perspective. Often behaviours that we don’t like are actually very rewarding to the dog. People often fail to understand this and it causes a tremendous amount of stress to canines and humans alike.

Let’s imagine my dog keeps chewing the garden hose. I tell the dog off when I see this, yet he keeps doing it! A lot of people think the dog is being spiteful – the truth of it is that dogs do not have the emotional sophistication to be spiteful. The dog is chewing the hose because he finds it rewarding to chew the hose – it’s got a great chewy feel to it and it’s like the world’s longest chew toy ever! Woo hoo! What fun! Getting moaned at after he has experienced the reward of chewing is hardly going to reduce the enjoyment he gets out of the objectionable behaviour. What needs to be done here is to firstly prevent (more about that later) and reward the desired behaviour. A suitable chew toy could solve this problem overnight.

The most important aspect with reward is to look at the reward from the dog’s perspective. If I think about this in terms of human behaviour I immediately think about my high school years. I would bunk classes (sorry Mom!) on a fairly regular basis and occasionally I’d get caught. The penalty for bunking was a one hour detention. Hmmm…. eight hours with my friends being mischievous and possibly getting away with it, or one hour in detention sitting at a desk. It’s pretty obvious that the reward I was gaining was of far more value to me than the “telling off” I would received if I was caught. I think the teachers had a rough deal because I don’t think there was any reward (apart from a day off school) which could have bettered my self-reward of bunking. No wonder teachers always look so stressed out…

This is such a crucial area that people overlook, especially with puppies. Somehow people expect puppies to know what is “right” and what is “wrong”. Epic fail. Dogs are totally amoral – they do not have morals as we do. They do things for one simple reason. Because they can.

In the case of the dog chewing the hose pipe the first course of action is to prevent this behaviour from occurring in the first place. It sounds so simple but it is the cornerstone to building nice behaviour in dogs. If unwanted behaviours are prevented, the dog does not learn how to behave in an unwanted way.

This applies to many aspects of a dog’s behaviour. I once had a pup that got a nasty gash on his muzzle. He was a young pup around 12 weeks of age and had only been to the vet twice before – once for a social visit shortly after I got him and again at 10 weeks for his vaccination. Although the vet was great with the pup during the vaccination and gave him loads of treats, I could see that the puppy was not entirely sold on this concept. The pup never growled or shied away from the vet, but I could see that he just didn’t seem totally at ease.

So now he had to go to the vet and his muzzle was sore - it was likely that this one incident could tilt the scale and my pup would now decide that the vet was dodgy. I could have a problem with this dog and the vet for the rest of his life. So I prevented this problem behaviour from ever occurring. When I arrived at the vet I asked him to please sedate the puppy entirely before he even examined the wound. The vet was reluctant, but I explained my reasoning that this pup was on the brink of being afraid of the vet and having his tender muzzle poked and prodded would result in the puppy having a lifelong problem with the vet. Trusty vet obliged and the pup slept through the whole incident. It may seem extreme, but if I had not prevented the possibility of anti-vet behaviour in this pup he could have easily become a dog for whom vet visits would be a nightmare. Needless to say at the pup’s next visit to the vet two weeks later he was very relaxed and had no hang-ups with the vet from that day forward. Exactly the same concept applies to dogs running out of gates, jumping on visitors, nuisance barking. Prevent the behaviour from ever occurring and hence being rewarded and odds are that the behaviour will never occur!

Dogs are creatures of habit. I don’t allow my dogs to travel on the front seat of my car for safety reasons. Just recently my car was packed to the brim and there was no space for my Labrador except in the front. I called him to the car and he sat politely at the back door waiting to be let in. I opened the front door instead and motioned for him to climb in. At this point he started looking over his shoulder for the hidden camera. Poor boy – he was very confused, but after some encouragement he gingerly jumped in. The short journey went without incident and after a while my dog relaxed a little. Now of course an open front door is just as much as an invitation to him as an open back door and I can’t blame him because I did not prevent behaviour. It’s quite amusing to see him jump into the front of the car with the other dogs watching in shock and horror. Once I’ve told him to get out of the front of the car he is met with six other dogs looking very disapprovingly at him – you can almost see a collective shaking of heads and a “Tsk..tsk”.

In conclusion I think the “one thing” that is required in creating a really nice dog is an owner with the attitude of: persist, reward and prevent. This approach seems to be the most important in creating dogs that are stable, relaxed, attentive and most likely to be just really nice dogs. Thanks Curly.