The article is posted and made available here by the generous permission of the Association of Pet Dog Trainers. All rights are reserved. The APDT Chronicle of the Dog, January/February 2010. 38-40.

A visit to Risё’s websites are really worthwhile.  There is a wealth of knowledge on dogs, children and dogs, play therapy etc. and is full of knowledge which is beneficial both to parents and professionals alike. 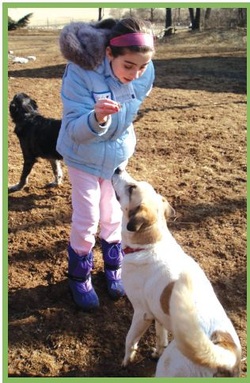 Risë VanFleet
Have you ever noticed how children—even very young ones—seem to zero in immediately on any animal that crosses their sight? Children are drawn to animals. They notice them, talk about them, think about them, enjoy stories about them, and even dream about them (Melson, 2001; Olmert, 2009). Many dogs reside in families primarily due to the pleas of children, and during these negotiations, parents sometimes extract from children the promise that they will completely care for the dog (Pelar, 2005). This is an arrangement fraught with unrealistic expectations, and it is usually doomed to unhappiness for all involved.

Having a companion dog is, after all, a family affair. For this reason, some dog trainers prefer to work only when the entire family participates. Training families, of course, means training kids, and this presents unique challenges to the training process. Furthermore, trainers sometimes find themselves working with individual children, siblings, or groups of children. Training dogs is one thing. Training adult humans is another. Training children and teens is another thing altogether.

Most of the basics of dog training are the same as with adults, but the teaching style must be quite different from traditional classes. Children can present challenges due to their shorter attention spans, failure to listen, unexpected movements and noises, family or peer dynamics, and lack of patience. Trainers might also face a variety of learning or behavior problems, such as anxiety, attention deficit hyper­activity disorder (ADHD), resistance, or shyness.

If you already train in a playful manner (see London & McConnell, 2008; Miller, 2008; Pearson & Warth, 2009) you’re more than halfway there. Just as with many dogs, play is a powerful motivator for children of all ages. Upbeat, playful classes are inherently more interesting for children and teens, perhaps because there is less judgment and more flexibility in play. Plus, play is more fun!

This article offers some tips for working with children and teens that can enhance their mastery of dog training.

It’s possible to involve children as young as three-years-old in dog training, but their abilities differ considerably from eight-year-olds or 14-year-olds. Unless you’re working with an individual family with different aged children, it’s better to keep the ages of children in a group within two to three years of each other.

Keep It Lighthearted, Animated, and Even a Bit Silly

Children and teens (and adults, too!) learn best in a nonjudgmental atmosphere that is fun and lighthearted. Playfulness adds a sense of emotional safety that allows children to try new things and risk making mistakes, important elements of learning. The playfulness can be reflected in the activities used (see London & McConnell, 2008; Miller, 2008; Pearson & Warth, 2009) and/or in the trainer’s tone of voice, energy, and overall demeanor. Some children can be quite serious, so trainers need to model livelier behaviors.

For example, while working with a group of 11-year-old Girl Scouts who helped train dogs at a local rescue, I noticed they were all very quiet and serious when giving cues to the dogs. I then demonstrated in a playful, high-pitched voice, “Here, Pup, Pup, Puppies!” while patting my thighs and wearing a big smile. I asked the girls, “How many of you think I just sounded pretty silly?” They tentatively raised their hands, to which I responded, “Great! That’s just how dogs like it!” After that, they became much more animated and relaxed.

While information is important, children quickly lose attention during lectures or spoken descriptions. Think of the main two or three points and make them animated and quick. When you see fidgeting or mischief, you’ve probably talked too long. 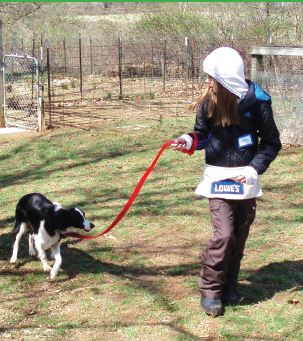 Children pick up techniques very quickly by watching the trainer perform them a time or two. This should be followed immediately by practice opportunities for the same technique. All but the oldest children easily lose attention during demonstrations too, so it is best to keep them short. The demonstrations are important, though, and trainers might need to redirect children’s attention, “Hey, watch this!” using a lighthearted tone. Another method to redirect their attention is to joke playfully with them, such as “Hey! I (while stomping a foot) want to be the center of attention right now! What do I have to do—cartwheels?” In general, it’s best to redirect attention to yourself using positive (but not sarcastic) humor rather than a more reproachful manner.

Just like some dogs we know, children need lots of rep­etition when practicing new dog handling skills. Repetition risks boredom, however, so trainers need to keep review periods action-oriented and lively. Each session can begin with a quick demonstration and practice of the previous session’s skills. For example, if trainers covered Watch Me and Sit in the first lesson, they would start with that the next time and then add the Stay and Touch cues. The third lesson would involve a lively review of Watch Me, Sit, Stay, and Touch before moving to Down. In addition to ce­menting in the prior skills, this builds children’s confidence as they conduct skills they have mastered before learning new ones.

Like dogs and adult humans, children learn best in a positive atmosphere. Encouraging statements and praise are critical. Encouragement includes comments such as, “I know it’s tough, but you can do it.” or “That’s the idea. Keep that leash loose. Now you’re getting it.” It’s important to praise efforts even more than outcomes: “You’re trying it again—terrific!” or “I can see you’re really trying to help your dog—that’s great—now let’s try this part again.” If kids don’t seem to “get” what you’re asking them to do, it’s time to break the task down into smaller segments.

Being as specific as possible is important when people, and especially children, are learning new behaviors. Giving behavioral descriptions, specific examples, or using metaphors relevant to children will help them learn more quickly. For example, an eight-year-old boy had difficulty using a gravelly noise, “annhhh!” to interrupt an undesir­able dog behavior, despite several trainer demonstrations. When the trainer reframed it to something concrete within the boy’s frame of reference, it worked better: “Do you know what those tractor-trailer truck horns sound like? Let’s try to make that sound! Annhhh! Annhhh!” From that point onward, all the trainer had to say was, “Truck Sound!” to elicit the right response from the boy.

Include Skills for Child Safety 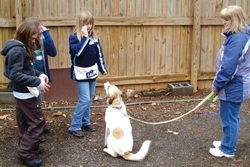 Risë VanFleet
Without guidance or training, children are at risk of in­jury from dogs. Their natural curiosity in dogs sometimes leads them to approach unfamiliar dogs, wrap their arms around dogs’ necks, and behave in ways that might feel threatening to dogs (Pelar, 2005; McConnell, 2005). All chil­dren and teens should learn how to ask permission to pet other people’s dogs as well as how to approach and touch their own and others’ dogs safely. Including these skills in dog training curricula might prevent bites or other injuries.

Include Lessons About Canine Communication Signals

Even very young children can learn to watch dogs more carefully, and older children and teens typically find in­formation about canine communication very interesting. When children learn canine “calming signals” or signs of anxiety (Kalnajs, 2006; McConnell, 2005; Rugaas, 2006; www.doggonesafe.com), they seem to become more em­pathic toward the dog and make better choices about dog handling. To teach children this information, one might use DVDs, materials from www.doggonesafe.com, or live demonstrations with dogs. Then, throughout the training process, the trainer can call children’s attention to canine signals that occur. “What do you think Buster is feeling right now?” or “Take a look at Snickers. Do you think that she likes it or doesn’t like it when you grab her hair? How can you tell how she feels?” Small reminders to watch dog signals throughout a training course eventually help chil­dren do it more regularly and naturally.

To keep children interested in dog training and to help them develop another important set of canine-related skills, training sessions can include brief play times for the children and dogs, probably at the end (it’s hard to get any­one’s attention back after a good playtime!). It’s valuable for dog socialization to include dog-dog play during a class, and similarly, it’s useful for dogs and children to learn to play together. Trainers might provide some tips for safe play followed by a period of free play, and/or they might suggest specific games that permit children to play with their dogs appropriately.

If children’s behavior gets out of control or they hurt their dogs, it’s appropriate for trainers to set limits on such disruptive behavior. This is best done in a calm but firm voice, telling the children what you want them to do. For example, a trainer might say, “I need you to stop running around the dogs. Please come here and hold this leash for me. That’ll be a big help.” Structuring the environment and giving children something to do can eliminate many poten­tial problems. On the other hand, if unruly behaviors con­tinue, the trainer can ask parents to manage their children. This can usually be done tactfully, saying something like “It’s distracting for me to have the kids running around the dogs. I’m worried about safety. Could you please get your children to come back to this area and get some treats ready for the next activity?” In general, it’s best to say such things privately or quietly to the parents to avoid embarrassment, but ultimately, the trainer must consider the needs of the entire training group and maintain control of the process.

Some children have limitations of their own that must be considered. For example, a five-year-old girl with ADHD involved in Canine-Assisted Play Therapy initially learned the basics of clicker training quite well. She managed to click and treat the dog for some simple behaviors (Watch Me and Sit) during her first session without problem. During her next session, her ADHD seemed less well-controlled, and she began clicking rapidly and constantly, as if she were playing the castanets. The therapy dog looked con­fused, and I as the therapist realized I had not adequately planned for this possibility. I wanted the child to succeed but she was clearly unable to concentrate sufficiently. I quickly said, “Hey, Susie, I have a better idea. How about if you tell Kirrie (dog) the cues, I’ll click, and then you do the best part—give Kirrie her treats?” Susie immediately agreed. Over the course of several sessions, Susie was able to gain more self-control to use the clicker better.

Working with children can be challenging, but with the right tools, it can be very rewarding. Giving children better dog handling and relationship skills can positively influence a lifetime of canine companions!