Can My Dog Eat Rosemary?

(this really is a great website with a lot of info on all things dog - enjoy!)
​by Jade Anderson 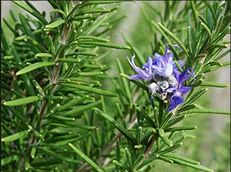 Rosemary is a safe and non-toxic herb for dogs.

Its beneficial properties have been long known and it has been used for countless purposes.

Today, with the increasing popularity of organic, all-natural and artificial-ingredients-free products, rosemary is back in fashion and rightly so.In fact, you may already be feeding your dog the herb with rosemary extracts used as natural preservatives in many dry dog foods.

Pure rosemary, in its natural form, has a strong odor and flavor which discourage dogs from regular nibbling. However, it should be mentioned that rosemary contains several volatile oils that if consumed in large amounts, can cause itchy skin, stomach upset or depression of the nervous system.

Therefore it is advised to keep your rosemary plant out of your dog’s reach and use it in safe amount and forms.

If used appropriately, rosemary is an excellent good-for-dogs herb.

What type of herb is Rosemary and what are its uses

Rosemary (Rosmarinus officinalis) or commonly known as compass-weed, compass plant or polar plant, is an aromatic, evergreen, culinary and Mediterranean shrub used in many dishes.

As a herb, it belongs to the Mints family (Lamiaceae).

The name rosemary is derived from the Latin words ‘ros’ and ‘marinus’ which translate to ‘dew of the sea’, referring to the Mediterranean coastal region where it grows in abundance.

In folk medicine, rosemary is used for memory enhancement. Today it is considered to be a symbol of love and loyalty.

Rosemary has white, blue, pink or purple flowers and stiff and leathery leaves, similar to hemlock needles. The plant has extremely strong flavor and odor.

When it comes to dogs and dog’s food, rosemary is often added because of its antioxidant properties and the power to act as a natural preservative.It is estimated that 36% of all dog foods contain either rosemary or rosemary extracts.

Once appropriately diluted, the rosemary oil can be used for inhalations or more commonly, topically. As with any other essential oil, rosemary oil should only be used for addressing the concern and not preventing.

Rosemary oil should never be added directly to your dog’s food or water.

Rosemary oil is also not recommended for dogs that suffer from epilepsy or other forms of seizures, as well as for pregnant bitches and puppies under 12 weeks of age.

​Rosemary’s benefits for dogs are wide ranging, including being:
Antioxidant – rosemary helps neutralize free, cell-damaging radicals in the body. The abundance of free radicals is directly linked to several age-related diseases like cardiovascular conditions and cancer. Rosemary is classified as powerful antioxidant.

Heart health promoter – rosemary has potent antispasmodic effects. Simply stated, it has the ability to prevent spasms that occur on smooth muscles, such as the heart. Therefore rosemary can be used for controlling certain cases of cardiac arrhythmia and for general strengthening of the heart.
The strengthening of the heart is especially useful for dogs recovering from traumatic events.
​
Digestion supporter – rosemary is good for addressing some gastrointestinal issues like gasses and indigestion. As previously mentioned, because of its antimicrobial effects, it is also good for gastrointestinal infections.

Pest repellant – rosemary is a powerful repellant for bugs like fleas, ticks, and mosquito.

Coat quality promoter – rosemary is good for the dog’s skin and coat. Adding rosemary to your dog’s regular baths helps keep the skin healthy and the coat glossy. Rosemary has excellent skin and coat conditioning properties and is good for soothing skin irritations.

Source of vitamins and minerals – rosemary is high in calcium, iron and vitamin B6.
Rosemary for fleasHolistic veterinarians agree that the best starting point in the fight against fleas is the natural and non-toxic option. According to them, chemical flea treatments should be used as last resort.

One of the most effective ways to fight off fleas is by using rosemary.

Rosemary has strong repellant properties. These properties can be manifested if using the plant in its natural form or when using its oils and extracts for making shampoos, powders, and sprays.
Before using the rosemary flea repellant it is important to get rid of as many fleas as possible, by bathing your dog and washing its bedding and flea-infested toys.

How can rosemary fight off fleas?Rosemary is a natural solution for keeping your dog flea-free and preventing health issues associated with flea infestations.

For this purpose, you can purchase commercial products that contain the herb or create your own rosemary concoction at home.

Rosemary mixtures can be used in the form of powders, rinses, sprays or as oil drops applied on the dog’s collar.

To make the rosemary wash, boil 2 pints of water, add 2 cups of fresh rosemary leaves and keep it boiling for 30 minutes. Then, let the mixture cool and remove the leaves. You can put the water in a bottle and keep it in the fridge.

To make rosemary flea powder, combine equal parts of rosemary, rue, wormwood, fennel, and peppermint. Then grind the herbs together until they are a fine powder. Apply the powder to your dog’s coat the same way as you would a commercial flea powder.

If used undiluted the rosemary oil can be irritating to the skin and has the potential to be ingested. Therefore, instead of applying the oil directly on the skin, you can apply few drops to your dog’s collar and bedding.