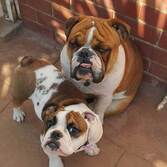 pic - Margo Kornblum
The history of the English Bulldog is unfortunately a violent one. This breed was created, sometime in the 1500s or 1600s in the British Isles from the ancient Asiatic mastiff. They were bred specifically for the purpose of bull-baiting (hens their name Bulldog), a cruel so-called “sport” that pitted a dog against a bull for a fight to the death. The original Bulldog must have been ferocious, powerful, courageous, savage, vicious and almost immune to pain.

In 1885 bull and dog fighting became illegal in England; so as they were now no longer of use the breed was in threat of disappearing. Luckily a number of fanciers attempted to preserve this fine breed, to retain its good qualities without promoting its bad ones. Within a few generations, the English Bulldog became one of the finest physical and temperamental specimens among canines, with its original viciousness completely gone.

In time they were crossed with the pug and the outcome was a shorter, wider dog with a brachycephalic skull. Though today's Bulldog looks tough, he cannot perform the job he was originally created for as he cannot withstand the rigors of running and being thrown by a bull, and also cannot grip with such a short muzzle.

English Bulldogs are short, compact, incredibly muscular and broad dogs. Their short legs have a bowed appearance, but are in fact straight. Bulldogs have large heads with a distinctly sour expression that is created by their seriously undershot jaw, large drooping jowls and wrinkled, flat faces. They have soft, loose skin and short coats that come in colors of brindle, white, fawn, red or piebald.

Despite their stout bodies and formidable features, the Bulldog is extremely gentle, docile, affectionate, friendly, playful, lovable, loyal, dependable and very protective over its family; but they can be stubborn and headstrong. They are easy to care for, highly adaptable and good natured dogs that love nothing more than a good tummy rub.

They can live anywhere; apartments and condos can make a Bulldog just as happy as a house with a big yard. They are easygoing creatures and are highly inactive when indoors, so the size of the home is never an issue - as long as they have a nice place to sleep. These dogs are very sensitive to temperatures, because of their flat faces and short noses they can overheat very easily and due to their short coats they get cold easily. For these reasons they are definitely indoor dogs.

Bulldogs do not need a lot of physical exercise, as puppies they love to play, but older Bulldogs are more apt to spend a day lazing on the couch. However they still require exercise to keep them fit and to prevent excessive weight gain, a daily walk will be more than enough, and be careful not to exercise them too hard in hot weather. They are highly unlikely to play fech, but they love to chew and can be very destructive chewers, so it is important to give them plenty of chew toys and hide your slippers.

These dogs are very courageous and protective over their family, this along with their intimidating appearance makes them exceptional guard dogs. They will also bark at strangers approaching their territory which makes them good watch dogs to

Bulldogs are very much a people’s dog, they thrives on lots of attention and love from their family and do not like to be left alone for long periods of time. They can be so attached to home and family that they will not venture out of the yard without a human companion. If they do not get the attention they need they can start displaying guarding behaviours, such as guarding furniture, food, toys, or other spots in the house.

This breed is particularly stubborn, unwavering and determined; if they don't want to do something, you will have a hard time getting them to do it. On the other hand if they want something they can be very persistent and they do not give up easily. They need an owner who can put their foot down and be consistent with the rules and limitations.

Apart from being stubborn, gentle and lazy they have some other wonderful qualities. They are messy eaters, they drool and slobbers a lot (especially after eating and drinking), often have wind (flatulence) that can be quite smelly, snores loudly and snuffles, snorts & grunts frequently. Apart from this their favourite pastime is to curl up on the couch and sleep all day. Despite their general easy-going attitude, food aggression is a problem with many Bulldogs. They love to eat and no one should ever mess with a Bulldog and his dinner.

In a nutshell, a Bulldog is for you if you: 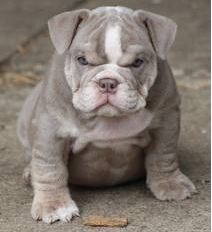 Only from reputable breeders! One can contact the Kennel Union Of South Africa (KUSA). They have a list of breeders who have puppies available and KUSA registered breed clubs

Which other breeds are most compatible with the Bulldog?

Bull dogs are quite laid back and small all-over-the-place breeds like a Chihuahua or Min Pin might not be the best choice as they may be a bit too much for the Bulldog. They can also get hurt accidently as the Bulldog is not the most gracious dog.

A bigger breed dog will be better as they will be able to play with them without you having to worry that one of them is going t get hurt. Good breeds to go for will be naturally another Bulldog, Mastiff, Boxer, Doberman, Pug, etc

Generally if they are well socialized they will get along with any other breed, but a breed of the opposite sex is recommended.

Most definitely, this is the most ideal situation as they understand each other. Preferably have a male and female. Two females will also get along as long as they are introduced as puppies. An older female will get on with a puppy female but it is not advisable to introduce two fully grown females or two females of a similar age. Always have only one male unless you have a lot of experience handling dogs.

Please read ‘Placing Littermates in the same home’ and ‘Double Trouble - (why you shouldn’t get two puppies)’ on our website for more information.

If raised alongside and/or properly socialized with other dogs, they will get on fine with them. But males tend to exhibit aggression as adults, especially toward other males. Bulldogs should be socialized around other dogs as early as possible. And because of their food aggression other animals should not be fed in the same area as a Bulldog.

They will also get along well with cats and other pets, as long as all parties have been raised together and/or well socialized.

They are excellent with children of any age, they form strong bonds and will exhibit the patience of a saint when children want to hug or climb on them. However because of their food aggression children should be taught to leave them alone while they are eating and the dog should be trained from a pup not to resource guard and accept people around its food bowl. 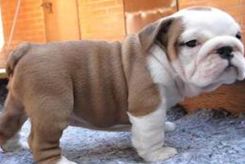 Bulldogs are stubborn, headstrong and can be a challenge to train. Patience, consistency, food and positive reinforcement are the only two methods that should be employed with this breed, as a heavy hand or harsh techniques will get you nowhere.

This breed is relatively low maintenance on the grooming front. Regular brushing can keep their moderate, year-round shedding from becoming unruly and baths only need be given when the dog has gotten himself into a bit of muck, or he begins to smell. The wrinkles of the face should be wiped and dried regularly in order to prevent bacteria from developing and care should be taken to dry the wrinkles after bathing, as well. They are prone to bad breath, so weekly or even daily tooth brushing is a must to keep bacteria from building up and causing tooth loss later in life.

As you groom, check for sores, rashes, or signs of infection such as redness, tenderness, or inflammation on the skin, in the ears, nose, mouth, and eyes, and on the feet. Ears should smell good, without too much wax or gunk inside, and eyes should be clear, with no redness or discharge. You trim their nail if they don’t wear them down naturally. Your careful weekly exam will help you spot potential health problems early.

These dogs have quite few health issues, this is not to say that they will develop any of these. Many Bulldogs live long health lives. Some of the health problems include:

Puppies are often delivered by caesarian section. Some say it is because of the dogs’ large head size, however others claim you can hardly tell the difference between the head size of a Bulldog with the head size of other breeds when the pups are first born; claiming not enough dams are given the opportunity to try and deliver naturally because of the large head myth. A lot of Bulldogs do run the risk of having weak labors and this could increase the risk of a caesarian.

Bulldogs' lives are relatively short and at 5 to 8 years of age they are starting to show signs of aging. Their lifespan is an average of 8 to 12years. 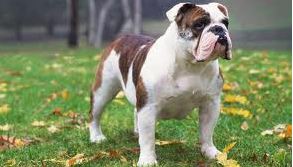