www.theanimalfarmfoundation.com
(These guys have a really nice Blog (Pitti based)and also educational downloads, worth a visit) 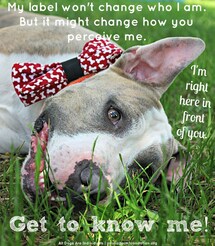 ​As we travel around the country, having conversations with shelters and rescues about the “pit bull” dogs in their care, we find that there are always a few big a-ha! moments that help people understand that all dogs are individuals just a bit better.
One of the more exciting moments typically happens during our Labels & Language presentation where we discuss the role of breed labeling in shelters and the assumptions we make about dogs based on those labels.

The talk helps shelters understand a number of concepts that apply not only to “pit bull” dogs, but to ALL the dogs in their care.

This one being of utmost importance:

How a dog is labeled or how they look on the outside, is not an indication of past or future behavior or their suitability for a particular adoption placement.

Too often, we make incorrect assumptions about dogs based on label or appearance.
Thanks to ample research, we know that visual breed identification of dogs is highly inaccurate. One study found that the breed labels assigned to shelter dogs by staff members were wrong at least 75% of the time.

Despite this, shelters continue to use breed labels. This is problematic because the highly inaccurate labels we assign to dogs cause people to speculate about how those dogs will behave or what kind of family they’ll need.

We’re using guesses to make predictions.
​
This approach leads to significant unintended consequences for all dogs, not just “pit bull” dogs.
Recently, we were at a shelter observing a photo shoot for a dog’s adoption profile. One person commented that the dog, a mutt, had black spots on his tongue so he was probably a Chow mix. If the speculation had stopped there, it wouldn’t have been much of a problem – maybe the guess was right or maybe not. We can certainly share our guesses. There’s nothing wrong with that!

But the guess quickly led to a discussion about how this dog might behave based on that label (independent, aloof) and therefore what kind of family he would need (not a good choice for a first time owner).

Rather than pay attention to the dog in front of us at that moment, who was enjoying getting his photo taken, the conversation took off with assumptions and predictions based on a breed description that may or may not apply to this individual dog.

A guess turned into a prediction.

If instead of speculating, we were more present in observing the animal in different situations, like how this dog was relaxed and social during a photo shoot, we’d realize that our assumptions are often way off base.

With nearly 75% of all shelter dogs reported as mixed breed dogs and with a 75% chance that shelter workers will make an incorrect guess at what that breed mix is, it’s clear that we’re making a lot of incorrect assumptions about the dogs in our care.

This is why we advocate for the removal of breed labels in shelters, a trend that’s gaining steam with progressive organizations in 2016.

Maybe you’re still not convinced. It helps to look at the science and research.

Many of you have seen our infographic All Dogs Are Individuals where we revealed the science of why breed and appearance alone are not accurate indicators of future behavior.
​
In our live presentations, we find that one series of photos really drives the point home that our unreliable breed guesses aren’t the basis for accurate predictions of future behavior.
Take a look at the following slides:

If these dogs came into your shelter, what breed mix would assume these two dogs are? And what assumptions would you make about how they will behave in the future?
​
Unlike in real life, where we often don’t know the parents of the mixed breed dogs that arrive in our shelters, we do know the genetic makeup of these two pups:
The two black and white puppies are a cross between a purebred Basenji and a purebred Cocker Spaniel!
​
Clearly, the puppies do not physically resemble either parent. But it doesn’t stop there…
When the puppies were backcrossed to either of the parental breeds – a purebred Basenji or a purebred Cocker Spaniel – those litters showed even more variability in physical appearance. See for yourself:
These photos make it crystal clear that breed guesses based on visual appearance are highly inaccurate.

We make labeling mistakes all the time and those mistakes have real consequences.
But we don’t have to take Scott and Fuller’s word for it.

More current research, such as the 2015 study titled Inconsistent identification of pit bull-type dogs by shelter staff, continues to serve as a reminder that breed guesses and labels, even those made my experienced shelter staff and veterinarians, are frequently incorrect. The results of the study revealed that:

“One in five dogs genetically identified with pit bull heritage breeds were missed by all shelter staff at the time of the study. One in three dogs lacking DNA evidence for pit bull heritage breeds were labeled pit bull-type dogs by at least one shelter staff member.”
​
We’re so often wrong when we make guesses about dog breeds. Yet those labels are powerful.
We allow them to influence our perceptions and predict future behavior or suitability for adoption into certain homes. This can lead to poor matches in regards to energy and temperament for adopters, along with more serious consequences, such as restrictions based on breed.
The bottom line is that labels aren’t reliable and they don’t tell us what we need to know about dogs. Rather than focus on labels and perceived breed, get to know the individual dog in front of you instead!