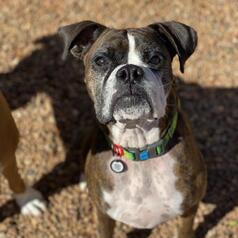 Pic - Boxer Rescue. If you are considering one of these wonderful dogs, do get in touch with a Breed Rescue first and foremost. Apart from being great at matching dogs and homes that are correct for them, they have a wealth of knowledge on the breed, and will be able to guide you. Link below - if not close to you, do search for one closer. http://www.tbro.org/
In the 1850s, a Bulldog (which actually resembled a small Mastiff) was exported from England to Munich. Years later, early Boxer fanciers used descendants of that Bulldog and the German Bullenbeisser to form the foundation of the modern breed, which was developed to be smaller and lighter than its predecessors. In 1894, three Germans took steps to stabilize and exhibit the breed, which they did in Munich in 1895 for the first time and thereby brought Boxers to widespread prominence.

Boxers were initially bred to be working, hunting and guard dogs. Later they became popular theater and circus dogs and were used to carry messages, ammunition and supplies during both World Wars. Today they are used for military and police work and as a breed is one of the pioneering guide dogs for the blind. They are also used as sensitive seizure-alert dogs and do well in agility, obedience and conformation.

The source of the breed’s name is uncertain, although some fanciers speculate that it was coined by an Englishman in reference to the characteristic sparring gestures made with its front legs during play, that remain a hallmark of this breed.

Other theories concerning the origin of the name “Boxer” include:


The boxer dog is a medium breed dog, with a compact and powerful looking body. This breed has a short and shiny coat. The body is squared off, with a strong neck and a high tail. The Boxer dog gets its unique look from a lower jaw that extends out past the upper jaw. The boxer has deep dark brown eyes, a wide black nose and black facial markings on the muzzle. Folds are apparent on the face, beginning at the base of the nose and carrying through to the sides of the muzzle. The short, smooth, close-fitting coat comes in fawn, brindle, tan, mahogany and black often with white markings.

Boxers may look tough as nails but under the surface they are lovable, curious, courageous, strong and athletic. They are prized as both a guardian and a family companion; being dignified, exuberant, affectionate, alert, self-confident, utterly loyal, very clownish and playful.

A Boxer can adapt to a smaller garden, but they are fairly active and will need to be taken out for exercise twice a day. They will do best with a large yard where they will be able to burn of some of their energy during the day. They are sensitive to heat and cold - their short snouts make it hard for them to cool themselves down in humid weather, and their coats are not thick enough for the cold so they are dogs who can live outside.

Boxer tends to be wary with strangers, fearless when threatened, alert and protective of their families which makes them reliable watchdogs and guard dogs. They will sound the alarm that strangers are approaching and their menacing, muscular appearance will deter anyone who poses a threat.

Boxers are an active, athletic, highly energetic breed and as they grow into adulthood they never lose the desire to romp and play like a puppy. They need lots of mental and physical exercise, daily long brisk walks will help burn some of their energy. They also love to run, jump and play (fetch being one of their favourites) in large open areas. Plenty of chew toys will also keep them busy throughout the day. Another good way to exercise them mentally as well as physically is by participating in dog sports like agility, flyball or obedience - they also love to perform tricks. Be careful not to exercise them too heavily in hot weather as they are prone to heatstroke. If they don’t get enough exercise they can become bored and will then find mischievous ways to occupy themselves - usually chewing anything in sight.

These dogs are cuddle bugs; they thrive on pats, hugs, scratches and belly rubs. They are very social and love people, craving attention and physical contact - they will want to be with their owners all times; becoming their shadow.  Boxers love to carry things around the house from a toy to a shirt, or just about anything and they also make a sound (usually when they want something) unique to their breed that some owners call a “Woo Woo”. They drool, slobber quite a lot (especially after drinking), snort, sneeze, grunt, snore and they sometimes have flatulence which can be quite smelly,

They need an owner who has a firm but friendly hand and can put their foot down in regards to what the dog is allowed and not allowed to do; they also need proper socialization and training from a young age. If not they can become sneaky, demanding, boisterous and hard to control.

In a nutshell, the Boxer is for you if you:

Only from reputable breeders! One can contact the Kennel Union Of South Africa (KUSA). They have a list of breeders who have puppies available or a KUSA affiliated breed club.

Which other breeds are most compatible with the Boxer?

Boxers are great with most dogs, they are very playful so it is a good idea to get a dog that is similar in size so they won't get hurt while playing.

A good choice would be a breed with approximately the same energy level and temperament. Naturally another Boxer, for other breeds you can look at Labradors, Golden Retrievers, Pointers, Greyhounds, Spaniels, Setter and herding dogs like Border Collies and Australian Shepherds also work well.

A well brought-up and properly socialized Boxer will get along well with other dogs as well as cats. However; animals such as rodents, rabbits, ducks, chickens and other farm birds may be too tempting so it is not recommended they be left alone with them

He adores children and is very patient with them and loves to play with them! However because of his boisterous nature he could unintentionally knock-over a small child. For this reason they are not recommended for families with small children and they should never be left unsupervised with young children.

The Boxer is highly intelligent and eager to learn but can be a bit stubborn and training should start from a young age.

They may not immediately follow every command and in some cases play a mental game with you called, "Who's the Boss?", taking advantage of anyone who gives them even the slightest bit of leeway.  But with patience, consistency and a firm hand they can be trained to do almost anything. Positive reinforcement and treats are the best method for training this breed, and harsh tones and discipline should be avoided.

Because they are very boisterous they should be taught not to jump up at people and to walk calmly on lead.

The Boxer's short coat is relatively no-fuss. They are clean dogs who groom themselves, much like cats do. Weekly brushing will keep their year-round shedding under control and occasional wipes with a chamois cloth will keep the coat shiny. Boxers only need to be bathed as needed, which usually means once every three or four months.