by Suzanne Clothier - one of the 'greats' in the dog profession. Do visit and sign up for her Newsletters, there are often great webinars available. www.suzanneclothier.com 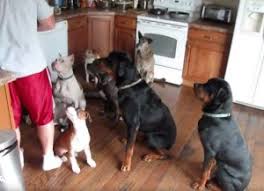 ​
Once upon a time, there was a concerned client who was considering adding another dog to their household. They already had two dogs, and were quite worried that dog number three might cause the dreaded “pack mentality.” And if that wasn’t enough, they also feared that the third dog would mean, and I quote, that “situations would get out of hand.”

This made me chuckle. What we do not understand, we fear. What we label without understanding, we may fear even more, because now we have a name for what we dread. I’m not sure if these good folks had watched “White Fang” or “Call of the Wild” a few times too many, but somehow, they’d come up with an internalized version of what “pack mentality” meant and what it would (apparently inevitably!) lead to.

Pack mentality does not equal aggression or discord or losing control. – it’s just the reality of a social group of dogs and how they think and act when together. Just as some some families can be peaceful, cooperative, harmonious and loving, so can packs of dogs. And just like the dysfunctional families who end up on reality shows, there are groups of dogs who are also given to infighting and would probably file for divorce if given a chance. (Or at least hope to appear on Dr. Phil…)

It all depends on the individuals, the situation, and the overall mental/emotional health of all involved. I’ve seen a group of 14 Border Collies that were a splendid pack, run by a calm, sensible, clear person. I also remember with a shudder the very disturbed man and his two Akitas – that was one very scary pack that I actually asked to leave my classes. All three of them worked together in an eerie, threatening way.

Add to to any social group of dogs t a huge dollop of knowledgeable, consistent interaction and, if necessary, intervention from a loving and capable human or two or three, and things can go splendidly though not without the inevitable lumps and bumps that occur even in the best of families.
​
My advice to the worried family? They should choose wisely and well when adding a new dog to their family. Unlike human families where our choices are often limited, we do have the luxury of selecting a new member of our blended human/canine family with an eye to what kind of personality would best suit all. We can and should shape our canine families with care – doing so can provide rich rewards when you find yourself a part of “pack mentality” and it sweeps you up in the joy of so many minds bent to a common cause.