(Some really nice articles on this site, plus a good blog - do have a look when you find a chance)

​Dogs bump and scrape themselves frequently when playing or running around, but what do you do if your dog develops a surface level skin condition that is more severe than an everyday bump of scrape? As a dog owner, one common condition to be aware of and keep an eye out for is an abscess. Human beings can also form abscesses virtually anywhere on the body, even beneath a tooth. Dogs can also form abscesses on almost any part of their body. You may be wondering, what causes abscesses in dogs? This foundational guide to abscesses in dogs will delves into what abscesses are, the most common causes of abscesses, symptoms to be on the lookout for to recognize an abscess, how a veterinarian will diagnose an abscess, and the potential treatment options available.

An Overview of Abscesses in Dogs

​Before examining what causes an abscess to form, it is important to understand what an abscess is. While surface wounds, like a scratch or a cut, are common for a dog to experience, a simple surface wound can become much more serious if it becomes infected and is not promptly treated. Because the surface of a dog’s skin is covered in fur, which in many breeds is thick enough to help protect the surface of the skin, cuts and surface wounds can go undetected if the dog is not routinely being checked for any abnormalities. If an infection in an irritated cut or wound is caught early, it can often be treated through using a simple ointment or cream. However, if the infection within the wound is left untreated, the irritation can become more severe. If the bacteria from the wound invades the skin or becomes increasingly irritated, an abscess can form.

When a specific area on the body is infected, it triggers a response by the immune system. If the immune system detects an infection, it will dispatch white blood cells to fight off the infection. In some cases, the white blood cells will all collect within the infected area and may begin to combine with the germs and damaged tissue in the infected area. When the white blood cells, germs, and damaged tissue combine, they form a liquid that is called pus. Abscesses are often identified by their distinct appearance. Abscesses feel like a mass beneath the surface of the skin, are often easily felt when being touched, and may have a pink or red hue on the surface of the skin. Many abscesses are also warm to the touch and be quite painful, depending on their severity and size. Abscesses are essentially an infected area with the body that forms a lump that is filled with pus. Abscesses can be painful and uncomfortable, so it is important to treat them as soon as they are discovered.
Common Causes of Abscesses in Dogs

Abscesses in dogs can be caused by a variety of different scenarios. The most common sources of abscesses in domestic dogs are bacteria that burrows into the surface of the skin through an open wound.

Common wounds include a scratch, cut, puncture, bite wound, or other skin surface abrasion. The bacteria will go down within the wound and will begin to multiply.

As the number of bacteria grows within the wound, the bacteria will begin to break down the surrounding tissue. This process of tissue breakdown often triggers an inflammatory reaction to occur. ​
An inflammatory reaction causes blood flow to the affected area to increase and be accompanied by pain, redness, and swelling. The outcome of this process is that pus begins to accumulate within the wound, which is eventually encapsulated in fibrous tissue. This is when the wound becomes an abscess.

​While this is the most common cause of an abscess in dogs, there are other potential causes and types of abscesses that can develop. While most abscesses form due to a surface abrasion that has become infected, in some dogs their body may form an abscess internally. In these instances, common sites for internal abscess development are the brain, mouth, gums, pancreas, liver, tooth roots, lungs, prostate gland, or anal sacs. Internal abscesses can be difficult to identify because they are often not easily identifiable on the surface of the skin and they are caused by a bacterial infection that has become localized within one area inside of the body. The two most common bacteria to cause skin infections, and subsequently abscesses, in dogs are Pasteurella Multocida and Staphylococcus Intermedius. In some rare cases, abscesses in dogs can be caused by parasitic worms or fungal microorganisms. If an abscess of any origin is left untreated, it can become a serious issue that is very painful for the dog.

Warning Signs of an Abscess In Dogs

Abscesses can present a variety of different symptoms depending on where the abscess is, the severity of the abscess, and the personality of the dog. Many abscesses are unobtrusive, which is how they can go undetected during their formation, but in some instances an abscess can rupture. One of the most common symptoms a dog will exhibit is pain that is localized to the area where the abscess is located on their body. In addition, the site of the abscess will often appear red or pinkish in color, will be inflamed, and may be swollen. Dogs that have an abscess may develop a canine fever due to the infection. Dogs may also display a lack of energy, or lethargy, as their body tries to fight off the infection within the abscess.

Specific symptoms are also dependent on the area of the body where the abscess has developed. If a dog has developed an abscess in her mammary glands, they will be tender, inflamed, hot, hard, and red. If a dog that is nursing does form an abscess, she must not nurse her puppies as she could transmit milk that is infected with pus and bacteria to her puppies, which can cause serious health issues and even death. If a dog has developed an abscess in his anal glands, he may get into a sitting position and then drag his bottom along the ground to attempt to alleviate his discomfort. If a dog develops a pulmonary abscess, he may display difficult or noisy breath sounds or coughing. These are just a few site-specific examples of abscess symptoms. As an abscess becomes worse, the tissue affected by the infection will begin to deteriorate. In some cases, the affected area may begin to turn black and emit a putrid scent. If an abscess ruptures, it will often drain blood and pus and be quite painful.

Diagnosing an Abscess in Dogs
​
If you discover an abscess that has formed on your dog, or if you suspect he may have an internal abscess, it is vital that you immediately make an appointment with a veterinarian. At your appointment, your veterinarian will begin by collecting a thorough history from you. This history will often include any prior medical conditions or treatments your dog has had, his exercise habits, what his diet consists of, any medications he is on, his overall health, and the duration and severity of his symptoms.

In addition to conducting an initial physical examination, many veterinarians will request additional testing to confirm their diagnosis and isolate what particular strain of bacteria they are dealing with. To ascertain what specific type of bacteria has infected the area, they may perform a swab test on the infected area. If the veterinarian feels that the infection may have spread to the blood, they may request a standard blood test to see if the infection has penetrated the blood stream. Some veterinarians may also request a complete blood count (CBC) or urinalysis as well so make sure that other bodily processes have not been affected by the infection. Depending on the outcome of these tests, the veterinarian will determine how best to treat the abscess. 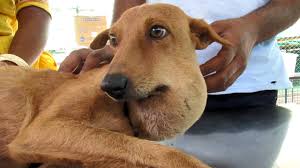 The treatment option selected will be dependent on the location and severity of the abscess. Many abscesses are able to be treated in an outpatient capacity, but in more severe cases hospitalization may be required to effectively treat the abscess. To treat an abscess, veterinarians will often lance (cut open) the superficial layer of skin that is covering the abscess. By opening up the wound, they are able to allow the abscess to begin to drain out the pus, blood, and/or fluid built up within the abscess. Once the wound is fully drained, it is thoroughly cleaned, bandaged, and the dog will be put on antibiotics. Some veterinarians may prescribe broad spectrum antibiotics, while others may use the results of the earlier test to prescribe an antibiotic that is specific to the type of bacteria in the wound.

Depending on the size and location of the abscess, some dogs may need the abscess to be removed surgically. The surgery may require local anesthesia, general anesthesia, or both. No matter what anesthesia is used, the affected area will be cleaned prior to the surgery and the hair clipped so that the surgeon can view the outside parameters of the abscess. Some abscesses may require a temporary drain to be placed to help speed up the healing process. If a temporary drain is put in, a synthetic tube will be sutured into the wound to drain pus, blood, and other fluid from the abscess out of the infection site. In other cases, the abscess may be lanced, drained, and then left open so that it can heal from the inside out.

Abscesses in Dogs: Causes and Symptoms