Please visit and LIKE our Facebook Page and share with family, friends and on your own Facebook page, and ask them to share further – it is only by working together and sharing knowledge and education that we can improve the lives of dogs and assist owners. We do not inundate you with posts – an average of 5 per week, and the odd Did You Know and General Post. Thank You!
Withholding - a lot more common than you may think, and happens in various situations 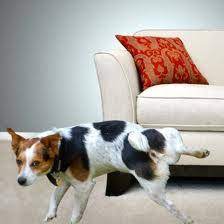 This can be a difficult toilet training problem to resolve, especially if you do not know the reason why the dog is refusing to go to the toilet in the first place.

Let’s look first at why this behaviour tends to occur:-


If dog eliminates inside during retraining, or areas are already marked.

Please note, that if the dog was eliminating normally previously, and the withholding behaviour has just started, it could be that there is a physical element, so do check with the vet first of all, as if physical, very little you do from a behaviour point of view will assist.

If any ‘accidents’ do occur, make sure you clean with either 1/3 white vinegar to 2/3 water, or a pet specialized product, and never use a household product as these often contain ammonia, which will make the area smell more like a toilet than ever.

If there have been multiple accidents in the home previously, best option is to really clean the whole area before starting your new toilet training regime – by the way, dap, don’t rub, as rubbing will just result in the smell being pushed more into any carpeted areas. If any areas are heavily soiled, try dampening them and putting on a layer of bicarb – cover with a plastic container and leave overnight, and then dab with the water/vinegar mixture or dog product. You can even put a few drops of pure citronella oil on top of the soiled area. Dogs, on average, do not like this scent and will avoid these areas.

If the dog does have an accident during training, clean immediately without making any fuss or chastising the dog, and then roll up a newspaper and hit yourself over the head for not supervising! The dog is never, ever, reprimanded for inappropriate elimination.

What to do – the basics

No matter what the reason for the withholding is, what is crucial is to start at the beginning again, as if working with a young puppy. Some pointers to help to change the behaviour below and we have added in a few pointers for dogs that only eliminate when on walks, and those that will only eliminate when at home, at the bottom.


Using specific areas for elimination
Dogs that only eliminate when they are out – very often what has happened here is that the dog has figured out that the second they eliminate, they are taken home immediately, so they tend to take as long as possible before they eliminate. Praise lavishly as above for when the dog does eliminate, and keeping the dog on lead, have a good 10 minute or so smell around before taking the dog back inside, varying the time period.

Limit daily walks to only once a day and about ten minutes as above, and for the rest of the day, you can engage in the basic routine as described above, with the dog being on lead – balance of daily walks will now take place in the garden.

The dog could also have been punished, or even just shouted at for eliminating in the home, so ensure that his does not occur.

With dogs that only eliminate when at home - are normally nervous of being in new places, and very often will not eliminate when out on walks, only to perform (often in the wrong area), when they are taken home. If the dog was ever punished for performing in the home, this will tend to make the situation worse. Your own reaction can impact as well, as the dog will feel any nervousness thought the lead – so be chilled and laid back.

What you want to do here is to build up the dog’s confidence to being in strange places, and ideally with no other dogs around initially – it may be the other dogs that your dog is nervous of, not just new areas.

We would suggest taking your dog out to the garden for his morning elimination, using the sequence above of rewarding, praising, and using the new cue, and keeping him on lead – with this dog, do not use only one designated area, let him eliminate in any part of the garden he prefers.

In between, choose just one area relatively close to home where other dogs are not likely to be to take your dog for a short walk, and you are going to start using as his new elimination area. You may find that it is easier to start with the area of pavement outside your home, as long as your dog will not stress when cars go by and there are no other dogs. Although the area you choose may be relatively large, do not expect your dog to walk around the whole area, rather keep him closer to the car so he feels more confident (or your gate). You can gradually walk him further away from the car/gate when he is more confident.

Continue in this manner until the dog is happy and confident and eliminating happily in the whole area. Your next step would then be to choose another new location, and yes, you are going to start at the beginning again and gradually build up his confidence.

Many dogs like these have issues with other dogs and that is why they do not want to eliminate, or it could be a combination of a new area and other dogs  – remember that when a dog is in the elimination position, especially for a stool, it is in a very vulnerable position.  If you feel this is the case, then follow the suggestions above and consider getting hold of a canine behaviourist who can take you to the next step of actually having another dog in the area and gradually building his confidence.