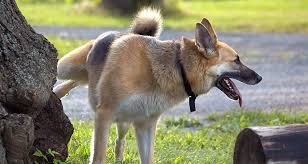 If you're a dog parent, have ever walked a dog or are simply observant of dog behavior, you're well aware of how much time our canine companions spend picking up and sending "pee-mail."
If you've paid attention to your pet's urination rituals, you know he's using his keen sense of smell to gather information. As he stops and sniffs (and sniffs, and sniffs), he's picking up facts about all the other creatures, in particular other canines, who've relieved themselves in the area. The behavior around urinating is called scent marking, and it's used by a wide range of animals as a means of communication. There are a variety of ways to scent-mark, but for dogs, peeing is the hands-down favorite.

The Purpose Behind Your Dog's 'Urinary Communication'

Despite how much time our canine companions spend in pee-related pursuits, very little is actually known about urinary communication among dogs. However, a pioneering 2011 study1 suggests dogs of both sexes use a variety of different urination activities to: The study authors believe dogs may use urine investigation and scent marking to establish safe social connections with other dogs. Anneke Lisberg, Ph.D., study co-author and an associate professor in the department of biological sciences at the University of Wisconsin-Whitewater told Discovery News it's possible dogs "might be able to assess many personal aspects of health, stress, virility, diet" and more just by sniffing another dog's urine.2
​
Lisberg believes marking and countermarking could be "a sort of Facebook of their personal life, easily accessible from a safe distance."

Does Size Matter When It Comes to Scent-Marking?

We know or assume scent marking allows mammals to exchange information with each other without direct contact. We also know that in the animal kingdom, body size is often an indicator of competitive ability.

So recently another team of researchers, this time from Cornell University, set out to test their assumption that smaller dogs might be more into pee-mail than larger dogs because they have more to lose if a one-on-one interaction with another dog goes bad. This assumption challenges the popular notion that competitive dogs do more scent marking than less assertive dogs.
The study involved 281 shelter dogs.3 The researchers observed the dogs on 20-minute walks and kept track of total urinations, urinations directed at specific targets in the environment and also defecations. The researchers walked some of the dogs once and others multiple times, for a total of 619 potty-walk observations.

Pooping for all the dogs was random, having nothing to do with size or sex, which makes sense since defecation seems to play a much less important role in scent-marking than urination, at least among canines. The researchers also noted that dogs who had been at the shelter longer did more frequent targeted peeing, and were also more likely to poop on their walks. The researchers concluded:

"Our findings regarding body size and urinary behavior support the hypothesis that small dogs communicate more frequently via scent marking than larger dogs. Body size is known to influence visual and auditory communication in mammals, and our data show that body size also influences chemical communication. Finally, our results provide context for problematic marking behaviors in the home."4

Of course, the smaller size of small dogs' bladders can sometimes account for more frequent peeing, but it doesn't explain the targeted aspect of scent marking. The takeaway: Small dogs prefer scent marking and do more of it because it's less risky for them than direct interactions with other dogs. They're able to avoid conflict through sniffing and marking.

Scent Marking: The Boys Versus the Girls

In one of Lisberg's 2011 experiments, she presented short wooden stakes that had been urinated on to a group of dogs that included both intact and spayed/neutered dogs of both genders. She then observed and recorded their behavior.5 Somewhat surprisingly, the females in the group spent just as much time investigating the pee of unfamiliar dogs as the males did. The males were primarily interested in the urine of unfamiliar males; however, the females were equally interested in the urine of both sexes.

None of the females over-marked. Instead, they adjacent-marked from a distance of 4 to 5 feet. In a previous study, Lisberg demonstrated that over-marking and adjacent marking are actually different responses with different motivations. Lisberg performed another experiment at a popular dog park to observe dogs' pee investigation, ano-genital (AG) investigation (butt sniffing) and peeing behavior at the entrance to the park. A few of her observations:


Interestingly, Lisberg noted a consistent tendency of dogs getting the AG treatment to quickly move a few feet away and urinate. This caused the other dogs to sniff the urine rather than the new dog, which ended the potentially stressful physical contact.

Lisberg speculated that urine marking might be a way for dogs to reveal social information about themselves, while avoiding the tension created by butt sniffing strangers. It's possible that if more dogs were able to greet one another through the pee-and-sniff method versus the butt sniff method, there would be fewer issues when leashed dogs meet up with other dogs.

When You Go for Walks, Let Your Dog Be a Dog!

According to Lisberg:
"Urine marks are really complex signals, and dogs seem to be far savvier than most owners seem to think when it comes to deciding what to sniff (and for how long) and what to counter-mark (adjacent or over-mark). When we walk our dogs, all we notice are the big responses, but we don't see the likely many signals that they are ignoring or avoiding.

For the most part, dogs are not wantonly running around and sniffing and urinating on everything (despite appearances to the contrary), but rather appear to be making decisions about what marks are important to pay attention to and whether and how to respond."6
​
Food for thought! "When it's dog walk time, let your dog set the pace, and let THEIR walk be for them," suggests animal behaviorist Marc Bekoff Ph.D. "Let them sniff and pee to their heart's content and enjoy the fact that you are allowing them to be dogs."7
​