Please visit and LIKE our Facebook Page and share with family, friends and on your own Facebook page, and ask them to share further – it is only by working together and sharing knowledge and education that we can improve the lives of dogs and assist owners. We do not inundate you with posts – an average of 5 per week, and the odd Did You Know and General Post. Thank You!

Why you should teach your dog the Watch Me exercise. 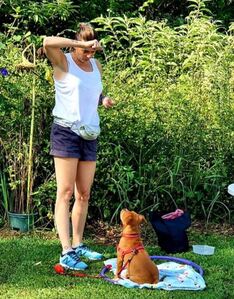 Unless you have knowledge of dog body language and realize that one dog turning its head away from another dog, is what is called a Calming Signal, and aimed at calming the other dog down, you may not understand why the Watch is so important.

It is a brilliant exercise to bring in when a dog is nervous/fearful/reactive, towards either people or other dogs. It is actually an exercise that even dogs that do not have issues with people or other dogs should also learn – you never know when your dog may encounter a situation where it does feel nervous or threatened, and by simply bringing in the Watch, not only do you calm your dog down – you are calming the other dog, as your dog is turning away from it.

Additionally, you build trust between you and your dog, as you have realized he is not coping, and have used a coping mechanism, and your dog will learn to trust you even more.

The Watch can also be used for dogs that are chasers, by asking for a Watch, you are taking the dog’s attention away from what it wants to chase and buying yourself time to take further action.
If two dogs are meeting for the first time, and there is direct staring between them, the outlook of the meeting does not look good, and reactive behaviour could occur. If one dog was staring, and the other dog turned its head away (and normally other common body signals), the dog turning its head away is saying ‘I am not a threat’. What would happen next would depend on what the dog that was staring actually did.

Now, how can we implement this dog language? Very easily!

When first teaching the Watch, start off with a hungry dog and use kibble in the home environment. As you make the circumstances more difficult, especially when out for a walk, use higher quality treats, and those with a strong smell, such as liver bread, biltong (not too much, its salty), or even cheese – actually anything your dog loves.  If your dog is not keen on kibble, and not a good eater, then start off with high value immediately.

Treats to be small, you want your dog to eat easily and quickly, as if you are in a situation where you need to say Watch several times in a row to keep your dog’s attention, you don’t want him to have a 5-minute chew on each piece.

Always start this in the home environment, and practice is essential. Once your dog has mastered in the home, then proceed to the garden and then on walks. Watch your dogs body language carefully, and if he does start to look at another dog, for example, you need to get the Watch in as quickly as possible. It is always a good idea while doing this, to lure his body slightly sideward and away from the perceived threat.

You will start off with the dog in the Sitting position, then graduate to him standing, and finally to being able to get a Watch while he is walking. Master each stage before going further.Do this all over the home ensuring that you can get his attention in all areas or the home and in all situations, and build up your time period. Once you can get a 30 second Watch, then time to take him outside. when you do go outside, it will be harder for your dog as more things to look at and perhaps going on, so go back to a 1 second watch and build up. The same would apply when you take him on walks – always start at the beginning and build up time period and difficult gradually.This is an exercise where we never stop the reward completely – we may build up the time we ask the dog to Watch, by saying Watch, Watch, Watch, or increasing the time period, and then giving the treat, but the treat is never completely stopped.