Why we should be deworming our pets - FOR OUR FAMILY’S SAKE
By Dr. S. Rigby

The sad reality is that most pet owners do not deworm themselves or their pets often enough.

This article will touch on some of the worms that our pets can give us. 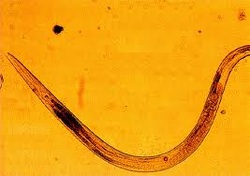 The adult worm lives in the small intestines of dogs.  They are transmitted to other dogs through faeces and to puppies through infected mother’s milk.

In dogs, these worms can cause clinical signs varying from: nothing to vomiting, coughing, pot bellies and weakness.

This worm is transmitted to humans mainly by infected puppies and kittens who contaminate the areas that children play in with faeces; or by children playing with pets and inadvertently transferring the eggs into their mouths. In humans, clinical signs are as a result of the migrating larva and include: fever, stomach ache, blindness, epilepsy. 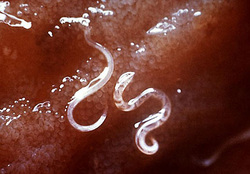 These worms also live in the small intestine of dogs. The eggs are excreted in the faeces. Under favourable conditions eggs (sandy, well drained soil, high temperature 23-33oC e.g. Beaches) the eggs “hatch” larva. They re-infect our pets either directly through their skin or eaten. Puppies can become infected by ingesting “infected milk”. As these worms are “ blood suckers” most infected pets become anaemic – (not enough Red Blood Cells) resulting in weakness , not wanting to eat/ drink and they may also develop bloody diarrhoea.

This worm is transmitted to humans mainly by the larva penetrating the skin (Cutaneous larva migrans), causing a rash and severe itchiness, mainly on the feet, as the larva move around under the skin. This is often seen by people a couple of weeks after a holiday to the coast!!! 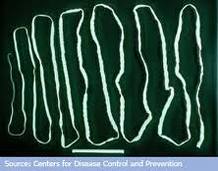 Dipylidium Canis
Is one of the most common tapeworms found in dogs. The Adult lives in the small intestine of dogs. These adults release segments (proglottids) with eggs in them into the intestine. These segments either leave in the faeces or leave spontaneously through the anus.  The infected stool is then eaten by an intermediate host – e.g. Fleas and chewing lice. If the infected flea is accidentally eaten by a dog the life cycle continues.

The most common clinical sign in dogs – is itchiness around the anus.

Echinococcos
These worms also inhabit the small intestine of dogs. As with all tapeworms, they release segments (proglottids) with eggs in them into the intestine. These segments either leave the dog in their faeces or migrate spontaneously through the anus.  The infected stool is then picked up an intermediate host (e.g. humans, sheep, goats).Most eggs then hatch in their intestines and the larva end up mainly in the lungs or liver, though, some can move to the brain, heart or kidneys. Most larva are killed by the immune system, but those larvae that aren’t (children and immuno-compromised), cysts form -with an adult worms inside them. Dogs then become infected by eating the infected tissue with the cysts in e.g. the liver etc

Like most tapeworm species – no clinical signs are seen in our pets!!!

Humans become infected by picking up the segments (proglottids) from the pet’s fur and general poor hygiene. The clinical signs in humans are dependant on where the cysts form: Liver being the most common (65-70%), lungs (10-20%) then the spleen, kidney and brain. Cysts can become > 20cm in diameter!!!

It is important to note that it is important to stop our pets eating infected meat, if you are not sure it is infected - cook it. The areas where our pets defaecate should be cleaned with Bleach on a regular basis (if possible) .

A dewormer with Praziquantel is good at killing this Tapeworm (but will there is no drug that will kill the eggs!!!)