Please visit and LIKE our Facebook Page and share with family, friends and on your own Facebook page, and ask them to share further – it is only by working together and sharing knowledge and education that we can improve the lives of dogs and assist owners. We do not inundate you with posts – an average of 5 per week, and the odd Did You Know. Thank You!
​Why the invisible Fence concept should not be considered

by Scotty Valadao - Friends of the Dog 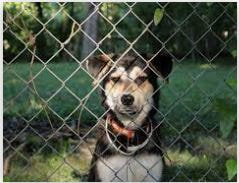 Firstly, exactly what is an invisible fence?

An invisible fence normally has two components - one, a collar which will issue a bleep when the dog gets too close to the wire, plus the collar has a transmitter that delivers the shock -  and two, an electric wire that can be placed across a gate for example - normally buried slightly underground. These are normally used to stop dog going out of gates, or keep them off areas of garden beds or similar.

The idea is that the collar will deliver a noise, such as a ‘bleep’, to warn the dog that it is likely to get shocked if it continues further.  Most of these invisible fences have a control where the shock given can be increased or reduced.

Some of the invisible fences come with flags which are used to help the dog identify the area where the electric wire is buried. Ideally dogs are trained to realize that they are not meant to go in this area.

Would we recommend these?

NO! There are several reasons why not: -

If your dog is lacking any of the above for example, would it not be a lot better to address                same and stop the main reason why the behaviour is occurring, rather than using an aversive          as punishment?


We do hope you consider the above before reverting to an invisible fence. If you have to train the dog to recognize the flags indicating an area not to be approached, is it not just simpler,  to get profession help to figure out why the unacceptable  behaviour (to owner at least) is occurring in the first place and be given modifications to change the behaviour - which will not be invasive or cause fear?