Why Some Dogs Rub and Roll In Their Food
​
By Kristina Werden of www.cuteness.com
(This really is a great website and do subscribe to their newsletter, which you will see on the website) 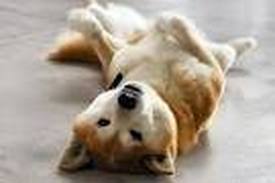 Your dog has a broad repertoire of weird and unusual behaviors which may include rubbing their faces on and rolling in their food! It's a common complaint for many dog owners that their pet is attracted to anything that carries a bit of a stink, and in some cases, dogs just can't help smothering themselves with that pongy material. But when it comes to food, the reasons why your pets need to wear it before they eat it vary somewhat.

Scent Spreading
Dr. Stanley Coren, noted animal psychologist, believes that one reason your dog rubs their face or rolls even rolls their entire body around in his food may be to tell other dogs about the presence of a food source. Coren contends that, while an unlikely adaptive behavior, it is plausible that dogs in the wild may use this technique to alert other members of their pack to the fact that there is a food source available. Another theory is that dogs do this simply as a means of basic communication. Rather than saying, "Hey guys, get it while it stinks," the dog is simply saying "Smell where I've been."

Scent Masking
Dogs are as naturally inclined to cover their tracks as they are to mark their territory. It depends on their environment. That's why they kick dirt over their poop. Rolling around in their food before they eat it is just an alternative to rolling around in other pungent smelling stuff. A dog who doesn't smell of dog has a better chance of sneaking up on prey undetected. Scent is a dog's strongest sense, so when a dog comes across something with an appealing or strong smell, he sometimes just can't resist using it to cover up his own scent to mask his presence.


Resource Guarding
Rolling in food before eating it can also serve the same purpose as hiding toys or barking at the mailman. Dogs are naturally protective over their resources, and by leaving their scent over their food, they are saying to any would-be food thieves "Back off, this is mine." It's not particularly important that the dog then goes on to eat the food he is attempting to mark as his own; it is the fulfillment of a natural urge to mark anything valuable as theirs that drives this behavior.

Personal Fulfillment
It's often easy to overanalyze canine behavior and look for an evolutionary theory behind it. Sometimes your dog just does things because it's fun or rewarding. Dr. Coren compares dogs rolling in strong-smelling organic matter to humans wearing loud and colorful Hawaiian shirts. We do it because it stimulates our senses. The only difference is that in the case of humans, the sense we're stimulating is visual.