Why should your dog tolerate ‘impolite’ behaviour from other dogs? 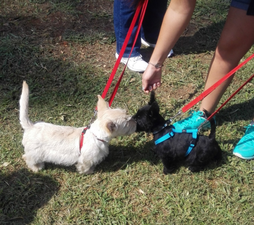 ​The scene – a pleasant walk in the local park (not a dog park) with your dog on lead, and there comes towards you a dog that is pulling its owner behind it as it lunges towards you. The owner saying ‘don’t worry, he won’t do any harm, he just loves other dogs’!  GRRRRR! Do these people not realize that the dog that is being lunged towards may have fear or reactive issues and the encounter could be a disaster! The owner could even have put in weeks of work to help the dog become accepting of other dogs, only to have it undone in one foul swoop.

Even worse is the owner that allows their dog to run freely around the park and shouts the same thing as above, as the dog races towards you! One owner who allowed their dog to do this to my Brady, who was blind and would have gotten the fright of his life, was terribly put out when I stepped in front of Brady – pointed my walking stick at the dog – and in the loudest and sternest voice I could muster said ‘Back – get away’. The dog had the sense to back off, however the owner then told me not to raise a stick to his dog! Really, that people can be this unthinking of other people and their dog’s reactions still confounds me! This same owner got rather angry as I continued to brandish my stick towards the dog that was attempting to come closer and when I told him to put his dog on lead and why – then told me that his dog was perfectly behaved and trained – this after the dog ignored about 10 commands to return to the owner. Apart from the fact that right next to this person was a board that showed that dogs are not allowed off lead – of course I expect he thought that this was aimed at other owners not him!

If your dog is not well controlled and will not come immediately back to you when called, then your dog should not be off lead in a local park under any circumstances, and especially not if you have several dogs all off lead together – can you imagine what a person with a dog that does have fears of other dogs feels at this scenario – and of course this tension will travel down the lead and impact on the dog!
​
Let’s put this into people perspective for a moment – would you be happy with somebody running full tilt up to you and throwing their arms around you if you did not know them? Of course not, so why do people allow their dogs to do this to other dogs?  Dogs like people, have personal space and this should always be respected.

Is it that a section of dog owners have no idea about appropriate meeting procedure between dogs – I mean think about it, just as every human being does not want to interact with every person they meet, why should our dogs? Or is it that their dog is friendly so they just assume that every other dog in the local park is as well, and really why should they care anyway? They may very well change their mind if their dog does happen to come screeching up to a dog that is not friendly -However that is not a situation you want either and often the dog that is barrelled into quietly walking along may react with aggression and is then labelled as aggressive and the possibility of it developing aggression to other dogs is a real possibility.

Dogs walking in our local parks should be on lead, and be taught to walk politely next to their owners – is this really too much to ask for?

So what should actually happen? If one of the people approaching wants its dog to say hello to the other dogs, then the first thing to do is to ask permission – a simple ‘may I bring my dog over to say hello?’ is all that is required. The other owner then has the opportunity of accepting or declining. If the dogs are going to be allowed to say hello, then a quick sniff is all that should be allowed, and the dogs are turned and taken a few steps away. By keeping the first interaction short and sweet, the stress levels are kept down and the chances of reactive behaviour reduced. Both owners should take note of their dog’s body language and look for any signs of stress – if this is evident, then the meeting does not go any further.

If both dogs appear happy, then let them sniff and turn away a few times more, each time a little longer.
This should be more than enough for the dogs – this is a casual meeting not a play date.
​
So, to  all the owners ‘out there’ who do allow their dogs to greet or lunge into other dogs without thought,  please take this is the spirit it is intended – to educate and to reduce the number of incidents that occur that are just not necessary.