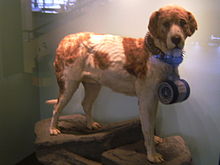 Barry - He has been described as the most famous St. Bernard, as he was credited with saving more than 40 lives during his lifetime
Most people are familiar with the stereotypical image of the dog as loyal companion and protector. Dogs have worked as guards for property, livestock and people for countless years – it was one of their original jobs and is one of the aspects that has made them so popular. Some dogs go the extra mile though. Spontaneously and of their own volition, they risk their lives to save people from dangerous situations. Why would a dog do this? Is it instinct, or something deeper and more human-like than we’d rather admit?

Some dogs are trained to save human lives, such as police dogs, search and rescue dogs and water rescue dogs. These dogs are taught to attack dangerous people, or sniff out survivors from an avalanche or bomb blast, or jump into lakes to save drowning people. Dogs that perform these skills are incredible, but they are different from the dog that has not been trained to such high levels. They are different from the companion dog in the home or the dog on the street who saves a life.

Although recent research shows that dogs are not the traditional pack animals that we once believed them to be, dogs are what I would term ‘family animals’. They are highly social and form strong bonds with the people (and other animals) that they are close to. A dog raised well in a good home is likely to be naturally protective of their people, in the same way that we are naturally protective of our families. Dogs can form bonds so strong that they find their owners when they move hundreds of kilometres away [1].

Dogs evolved with us over thousands of years and are unique in the animal kingdom in their communication skills with people [2]. Dogs appear to have a natural affiliation to people. In studies where dogs were the given the choice between interacting with a person or another dog, most dogs chose to interact with the person [2]. So would dogs save people just because they happen to like people? That’s part of the picture but not all of it.

Ask any dog owner and they will tell you that dogs ‘know what they’re feeling’. Most dog owners have had the experience of their dog coming to rest their head on their lap or lick their face when they’re upset. People who work with dogs – trainers, behaviourists, etc – will agree. Your emotions have an impact on your dog and your dog will respond to how you’re feeling. Dogs can recognize our emotional state from our tone of voice and our facial expressions. They also yawn contagiously when people yawn, something that it was previously thought only humans did [2]. This may not seem like much, but contagious yawning is one of the markers of empathy – humans with disorders like autism, who don’t recognise human emotion, do not yawn contagiously. Dogs will also console other dogs that have been in a fight, and they generally console the loser of the fight. This happens even if they haven’t witnessed the conflict themselves – they know which dog needs their comfort [2]. So it seems likely that dogs can empathise with people, meaning that they will sense their emotions and may feel corresponding emotions themselves. A little more of the picture is now painted.

Every single dog is completely unique and has their own individual personality. Every dog will respond slightly differently to a given situation depending on their personality. Where one dog may see a dangerous situation and turn tail out of there, another dog may show interest, and yet another dog may actively investigate. Not all dogs are going to risk their lives to save someone – they may be too nervous, lack confidence or simply not know what to do. But a more fearless dog may be happy to jump into the fray. This is the next layer of the painting.

So, apart from the dogs that are trained to do so, which dogs are going to save human lives? Which dog will jump into a burning building to pull someone out; which dog will pull someone out of a car wreck; which dog will confront the attacker of a person they may not even know? It seems likely that the dog who will do this is the dog that has a high affiliation for people, a high level of empathy and can sense distress, and a bold personality. This is obviously a very simplistic reasoning and there is a lot more to dogs saving  lives than is elucidated here.

In his book The emotional lives of animals, Marc Bekoff tells the story of his dog Jethro, who saved a baby rabbit and a stunned bird and did not injure them, but rather brought them gently to his owner in his mouth and watched over them until they were ready to leave. There is a now famous video doing the rounds on the internet of a dog pulling another dog, who had been hit by a car, off a busy road [http://youtu.be/f5OEKA47xFI]. Dogs don’t just save people – they save other animals too. And it’s not just dogs that rescue others, many species have been reported to do so.

In human psychology, much study has gone into why humans would risk their lives to save another human and although there are some answers, the entire picture is not clear, so understanding why a dog may do this is even more blurry. There is likely a lot more to this picture, but research on canine cognition and emotion still has a long way to go.