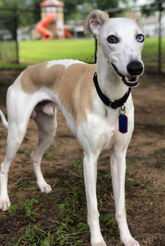 Picture Pic Whippet Rescue - If you are considering getting one of this wonderful breed, please, first and foremost do consider rescue. Breed rescue know they breed well and are great at pairing the right dog with the right home. link below, and if this rescue not in your area, do look for one that is. https://whippet-rescue.org/

They are a sight hound breed that originated in England, where they descended from greyhounds at the end of the 19th century. The original Whippets were thought to be English Greyhounds that were too small for stag hunting in the forests of England. These dogs were frequently returned to their breeders, who were usually peasants and as such could not own hunting dogs under the Forest law. Because of this, dogs returned to them were maimed, usually by cutting a tendon in a leg or removing the toes on one paw. The breeders kept these dogs and continued to breed them, producing a smaller version of a greyhound that was suited for rat catching and hunting hares and rabbits. When the Forest Law was repealed, the "small greyhounds" became immensely popular. Whippets were then commonly known as "snap dogs" for their tendency to "snap up" nearby prey. Its name Whippet derives from the expression "whip it" meaning to move quickly. Some of the Whippet's talents include: hunting, sighting, watchdog, racing, agility, and lure coursing.

Personality
Many people think that whippets are skinny, nervous, fragile and won’t come back off lead, but nothing could be further from the truth. They are versatile, athletic, intelligent, affectionate, muscular, robust, playful, confident and responsive. They love people and enjoy sharing life in the house with the family whether it’s chasing a leaf that’s fallen from a tree or being curled up in your lap whilst you watch TV. They are best described as wild and wicked clowns of the dog world and you’ll always be laughing with your whippet.
Is this the correct pup for you, which is the best home and why?
Whippets are suitable for everyone - families with any age children; couples; singles; elderly people; disabled people; houses with yards, townhouses and even apartments. They fit in anywhere, on your lap and in your bed.

This very devoted companion is quiet and calm in the home. They are however extremely sensitive to both touch and sound, they startle easily and tend to jump or overreact when touched unexpectedly.

Whippets are not suitable as an outside dog. Because they are thin skinned, short coated and generally don’t have much fat, they can lose weight quickly in cooler months and get cold very easily.

Whippets can be excellent watch dogs and will announce the arrival of visitors and strangers but they are by no means yappers and they are extremely unlikely to bite anybody.

The youngsters love to race around playing ‘rabbit’, but by the time they reach the age of about three, they have settled and tend to become couch potatoes. Occasionally bestirring themselves to race down to the gate and bark at other dogs passing by and once they have had their say, they return to their places on the couches where they nap happily until feeding time. However they are still sight hounds, and as such, will instinctively chase and kill any rapid moving objects.

Whilst they are lounge lizards and will mostly be content to live indoors and share your life, they do require regular exercise. They will fit in with whatever exercise you are able to offer, run with you if you are training to be a triathlete or just a brisk daily walk on a leash - they should have regular opportunities to run free on open ground (in a safe area). They also love toys and will spend hours amusing themselves with their toys and not being destructive they and often have their puppy toys into the adult life.

They are athletic enough to jump, and skinny enough to squeeze through, so your fencing needs to be in good order and high enough to keep them in. generally, they don't want to leave home but there have been the occasional whippet who will jump 1.8m if there is something tempting enough on the other side.

In a nutshell, Whippets are for you if you:-

Only from reputable breeders! One can contact the Kennel Union Of South Africa (KUSA) . They have a list of breeders who have puppies available.

Please read our articles on how to choose a reputable breeder on the Puppies page and do consider rescue.

Which other breeds are most compatible with the Whippet?

Whippets get along very well with other Whippets, otherwise a good option would be Gray hounds, Springer Spaniels, Italian Greyhound, Miniature Pinscher or even Beagle. Breeds who have gentle, kind and quite temperaments.

Avoid breeds that are boisterous like Labradors and Boxers, hearding dogs and terriers are also not a very good choice.

Most definitely. This is the most ideal situation as they understand each other. Preferably have a male and female. Two females will also get along as long as they are introduced as puppies. An older female will get on with a puppy female but it is not advisable to introduce two fully grown females. Always have only one male unless you have a lot of experience handling dogs.

This is not a good idea. Most people think that the pups will be happier with a playmate and won’t fight if they are family. The truth of the matter is that your two pups are likely to:
Please read ‘Placing Littermates in the same home’ and ‘Double Trouble – (why you shouldn’t get two puppies)’ on our website for more information.

They are non aggressive and aren't prone to fighting with other dogs and it is extremely rare (even unheard of) for Whippets to bite. They happily co-exist with other breeds - and cats.

However, like all dogs, it is important to socialize them especially with cats and visa versa (get the cat use to the dog). This is important because if you have a cat that runs away from the dog, the dog will chase it - even if it is a pet cat that the dog is use to.

Whippets are renowned for their calm, laid back nature. They are considered to be patient and tolerant and very affectionate. In short they are, in most cases, excellent pets for families with children as long as the children do not roughhouse or tease them. That being said, just because a dog is reputed to be excellent with children doesn't mean it will automatically be so without training and intervention, both the dog and children need to learn how to play together safely.

They will bark and alert at visitors but more from excitement at a new lap to try out, however they may sometimes be reserved with strangers.

Whippets are fairly easy to train, some can present some trouble with housetraining but in general that is not a problem. However they should never be roughly trained, because they are extremely sensitive both physically and mentally. Be sure to introduce plenty of variety when training them, the best results will be achieved by including games and running.

Whatever activity you want, your whippet will fit in. They learn routines and adapt quickly, easily keep up with joggers, are excellent agility dogs, love lure coursing, make wonderful pets as therapy dogs, can be trained for the obedience ring and are excellent conformation dogs.

Being a sight hound if there is something interesting to chase, a whippet will run after it, but like any dog, your whippet should be trained to come back as soon as called.

One of the absolutely delightful aspects of the Whippet is that it needs the barest minimum of grooming. They have such a short, sleek coat, that they only need a brush with a firm bristle brush or rub with a damp chamois about once a week to keep the coat gleaming. They do need to be bathed but only when necessary and they are average shedders.

Because of their short coats they don’t have that typical ‘doggy’ smell. They also love to be clean themselves and are rather cat-like in this aspect.

Whippets course, work, and race; they have been bred for these jobs for years. This has kept them a structurally sound breed which is predominantly free from the physical exaggerations that can lead to certain health problems. Whippets are, like other sight hounds, intolerant of barbiturate anaesthetics, this is in part due to their low concentration of body fat and their liver's inability to metabolise the anaesthetics. Some other health issues are stomach upsets, skin problems and arrhythmia.

They live uncomplicated lives free of specific hereditary diseases, naturally they can develop a life threatening disease such as cancer but they are generally a very healthy, hardy breed which enjoys a long life.


“In today’s age, with the rising cost of veterinary care, it really is a wise decision to consider medical insurance for your pets. Depending on the plan you choose, you can ensure that if your pet does develop one of the health issues the breed is prone too, that you will be covered –additionally, just knowing that any accident your pet may have will be covered, will out-weigh the monthly insurance fee for most pet owners. Our own personal choice is Genricpet as they have a ‘no limit’ policy and their rates are comparable to the rest of the industry. To find out the questions and things to look for in a Medical Insurance, please just follow this link”
​

Being a small/medium size dog and given proper nutrition, exercise, and veterinary care, most Whippets live for 12 to 17 years.