What Your Dog's Bad Behavior Says About You

In order to fix a problem at the lower end of the leash you have to look at who's holding the other end.

If you live with a dog chances are, despite how much you love them, there are a few behaviors you're just not that into.

At our house, a nearly 13-year-old Pomeranian named Truffle is in charge and knows it. His frantic barking at every passerby, bird and rock drives us wild, but rather than deal with it we pick him up or give him something — anything — to make him stop. Sound familiar?

But why is he so barky all the time? It turns out it's not about him — it's about us.

He's just doing what works, as dogs do, Tyler Ohlmann, dog trainerin Louisville, Kentucky, told BETTER. (While Truffle is a wildling, our extra large puppy Cassius is one of nearly a thousand dogs Ohlmann has trained.)

​If Ohlmann had a motto printed up on a T-shirt that's what it would read: Dogs do what works. Their behavior is a direct reflection on their handling, he says.

“In order to fix a problem at the lower end of the leash you have to look at who's holding the other end,” he said. “Dogs are experimenters. The feedback for what they do leads to their future behaviors.” It's not that they're sitting there plotting, he says (although I'd swear both our dogs purposely wait until we sit down to dinner to request they go outside!). “They just do and see what happens,” he said. “Babies do the same thing. If what they do results in something favorable they'll do it again. And if it results in something unfavorable, they're less likely to do it again.”

So just what are we doing that's causing our dogs to behave in these annoying — if not infuriating or downright dangerous — ways? Here's what this trainer says your dog's behavior says about you.

Impatient much? Yelling a string of commands at your dog without giving him time to take action speaks to a high degree of impatience, Ohlmann says.

“It's the same as if you asked a friend, 'Hey, how was your day, what did you do, by the way did you see that TV show?' without waiting for them to respond,” he says. “The dog doesn't even have time to process the command [before you're shouting it again]. Talking over somebody would be considered impatient. It's the same thing to your dog.”

(Another pitfall of repeating the command, we learned in class, is that the dog learns they don't have to obey the first time — not what you want, especially if you need to call your dog back to you from a dangerous situation!)

WHO'S WALKING WHOM? ROVER PULLS HIS LEASH THE ENTIRE WALK.
​
​If a dog walks its owner down the street it's likely that “the person on the other end of the leash is in things for immediate gratification,” Ohlmann says. Most dogs will pull until taught otherwise. And letting the dog get away with this behavior puts you both at risk. “Once a week somebody tells me their dog pulled them down and they got banged up,” Ohlmann says. “To teach your dog not to pull means you have to teach, which means there is work. It's a surefire indicator that they're not willing to put in work for stuff.”

MAX IS A BEGGAR. ONE MEAL CAN'T PASS WITHOUT THOSE SWEET PUPPY DOG EYES AND THAT PITIFUL WHINE EVEN THOUGH HE JUST ATE.

We know, those eyes are almost too much to resist — but stay strong.
If you just can’t help but slip them a little something from the table, then you're probably not seeing the bigger picture, Ohlmann says. Giving in to that what seems like an inconsequential request now has long-term implications. “It's shortsighted. We feed our dogs too much. They end up with diabetes, it's bad for their knees.” He says. Obesity is a leading cause of canine death, Ohlmann adds, “you're killing your dog with kindness.”

if your grandmother wasn't able to take care of herself and you started saying, 'Here's a Little Debbie and another one and another one,' how awful would you be?” Ohlmann says. “But we do that to our dogs.”

YOUR DOG IS JUST BONKERS ALL THE TIME. NOBODY CAN GET ANY PEACE BECAUSE SPOT IS BOUNCING OFF THE WALLS.

Is your dog's energy uncontrollable? It might be a sign that you need to calm down. Chances are “you have too much going on in your life and it shows,” Ohlmann says. Sure, there's the dog that's just naturally high energy. “But for the person who goes through three or four dogs and every one is nuts, that's definitely an indicator that your life is crazy.”

Dogs feed off energy around them, Ohlmann explains. “Puppies from eight to 16 weeks are imprinting and forming a baseline for what their life is to be. If they were with their mom they'd be learning social manners in their pack. Then they come with us and look to us for that guidance. I pity the dog that was adopted the week before the start of school — everybody's running around, they're getting pushed to the back burner, and what they learn is to compete for attention.”
“Let's calm down,” he says, adding only half-jokingly, “I need to partner with a yogi for dog training to get people's heads in the right space.” 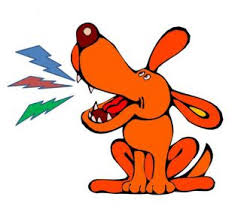 Bad news for yours truly. If your dog barks all the time, you're probably a pushover, Ohlmann says. Now, not for all dogs. “German Shepherds [for example] bark because it's hot out or cold out or the sky is too blue,” he acknowledges, “but if you go in a house and a lab is barking at its people all day, they taught it [to] by giving it stuff every time they did it.”

The dog was demanding, he explains, and its “people say 'what can I get you, do you want a treat?' Woof woof woof, 'here's a bowl ofwater, here's a frisbee.' You can't teach something to demand if you don't give in.”

BUDDY CAN'T GET ALONG WITH OTHER DOGS. NO TRIP TO THE DOG PARK IS COMPLETE WITHOUT HIM STARTING SOMETHING WITH A PERFECTLY NICE PUP.

You may not be much of an authority figure. A dog's aggression stems from the owner not standing up for themselves, Ohlmann says, emphasizing that this addresses the dog who's learned the behavior from the current owner, not one who came that way from a previous situation.
Related

When the dog is behaving inappropriately, growling [for example], instead of saying 'this is not something we will accept,' you say, 'oh it's ok.' To a dog that looks like 'oh good dog!” Ohlmann says. “You took the 'let's coddle it away' approach. Obviously it's harder [to set boundaries] than to shower them in love and hope bunnies and rainbows get rid of a very serious problem, but you took the easy way out and that's a detriment to the dog.” Because guess what? Now he's learned that aggressive behavior is fine.

This brings up discipline, and “people frown upon punishing, but if your dog chews through an electrical cord, Mother Nature punishes,” Ohlmann says. “That's not going to be a popular answer, people are going to say 'he wants you to beat your dog.'”

But punishment does not have to be phsyical. There are other ways to show your dog that a behavior is inappropriate. Ohlmann has had success with social exclusion — simply ignoring the dog — and better still, the element of surprise.
​
“Dogs don't like to be startled,” Ohlmann says. “If you were in the shower singing and someone doesn't like it they don't have to beat you, they just have to turn off the hot water. It got your attention, it interrupted your behavior.”