What to do when you are attacked by a dog

By the late Dr. Sophia Yin, who was as passionate about education we we are. Do visit the website, full of valuable information.
https://drsophiayidrsophiayin.com/n.com/ 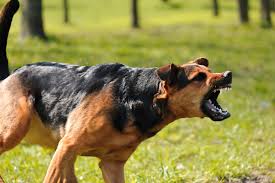 With all of the dog bite attacks that circulate in the news, you may sometimes worry; what if that were you?

As a veterinarian focused on behavior and an avid runner, I’ve dealt with a lot of dogs charging towards me and threatening to bite.  In spite of working with aggressive dogs as well as running by off-leash dogs on a daily basis, I have only been bitten—minor bites— a few times over the last 20 years. What’s the secret? The number one secret is to stay calm. The more you scream and try to move the more aroused you’ll make the dog—here are the two scenarios.

Two Bite ScenariosSay you’re running along and a dog comes sprinting out from his front yard. If you run faster, you may elicit a chase reflex, the same reflex triggered when a dog sees a cat or a squirrel run by. What you should do instead is face the dog and stand still, like a pole or a tree. Your arms can be folded in front of you so that you don’t accidentally swing them around.

Most dogs that race toward you, even aggressively do not have the intention of biting; rather the charge, bark and growl, are just a threat to get you to go away. When you stand still instead of continuing to move, they bark and back away, and if you step towards them they back away faster. So once you’ve stopped and they realize you’re not going to run away for them to chase, they will generally walk away on their own. You can also back away slowly in a ho-hum, relaxed manner. Once you’ve built up some distance you can turn and continue on your planned route.
​
Some dogs run out towards you because they’ve just practiced barking at things that go by and when those people continue to pass, the dogs learned that barking and chasing work. They’ve done this so much without thinking that they have no clue why they are barking at you. They may actually want to play, but in their hyper-excited state, if you yell or swing your arms around, they will get more excited and just grab whatever is swinging in the same way they would grab a flailing squeaky toy. This is why it’s especially important to be completely still like a tree.

The method I just described has worked for me in all situations where I have been charged—even in cases with dogs that have a history of biting, a prolonged attack, or having sent humans to the hospital. The reasons their previous bites were bad is that the dogs were responding to the reaction of the person they targeted. Most dogs actually bite out of fear and if the person they defensively charge or snap at screams and flails, it triggers and even stronger survival attack response.

What do you do if you can’t hold still because you’re scared? If the dog starts jumping up on you still try to remain calm and keep your back to the dog so that the dog can’t get to your face. If the dog actually takes you to the ground, roll up in a ball with your knees bend and your hands around the back of your neck and hold as still as possible.

Realistically, if you are just calm, this is not likely to happen. If you are extremely fearful that something like this could happen while you’re walking on the street because you live in an area where dogs rush out, avoid the urge to carry a stick or yell. In the countries I’ve visited where free roaming dogs are common, the use of sticks and rocks to keep dogs away actually have caused the dogs to be more aggressive!

Place Something as a Shield Between You and the Dog

It’s better to consider carrying pepper spray after you’ve taken a course on how to use it. Realistically, what works even better for a dog that is charging you and actually planning to bite is anything that you can place against your body as a shield or wall. Yes, just held firmly and NOT pushed towards or used to hit the dog. The wider, and flatter the object the better so he can’t grab it. Basically the goal is to just have a big flat object in his way. It’s true that even the most enraged animal gives up trying to bite objects that are too big to grip. If you don’t happen to feel like carrying a trash can lid on all your walks, you can always use your open umbrella or purse or bag as a wall between you.

Remember, most dogs that rush towards you on the street aren’t out to bite you. Try to stay relaxed and you’ll be much more likely to remain safe.

Find more articles about dog bite prevention by going to drsophiayin.com/resources/dog_behavior.
Review the signs that the dog is anxious and fearful and what humans accidentally do to cause the dog to snap or bite, with these PSAs: Dog Bite Prevention & what to avoid and Seven Tips For Preventing Dog Bites for Animal Care Professionals & Pet Lovers.

For more on how I handled a real life situation where potentially aggressive dogs were chasing runners, read my blog on the situation in Yuendemu