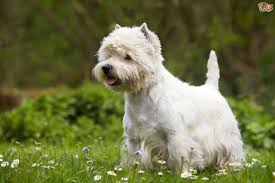 The West Highland White Terrier has a shared history with the Dandie Dinmont, Scottish, Skye and Cairn Terriers, and they are all considered branches of the same breed.

This breed, known affectionally as the Westie, hails from Scotland where he was used for hunting - primarily badger, fox and otter, and also for killing mice and rats.

Edward Donald Malcolm, 16th Laird of Poltalloch, is credited with the creation of the modern breed from his Poltalloch Terrier, but did not want to be known as such and have a dog called after him and asked for the name to be changed - it then became known as the West Highland White Terrier.

This is a lovely sturdy little dog, with no lap dog tendencies, although he does love his family and being around them.

The Westie is very much the 'normal' terrier type of dog, although it is said to be less boisterous, stubborn etc, than many of the other terrier family.

Although this is a small dog, he needs a lot of exercise in order to keep him happy and not end up bored and frustrated. It is estimated at least an hour a day. The breed is very bright, but like many terriers, especially with training, he can be wilfull and demanding. A more experienced owner who works with positive reinforcement methods, and will quietly and calmly keep this little dog in line, is what is needed.

Due to what it was bred for, it can become a professional digger, especially if bored or frustrated. To satisfy the natural digging instinct, it would be a good idea to have a Digging Pit in the garden, which is kept stocked with nice goodies for added stimulation and to satisfy a nature trait.

​This breed can also be barkers, especially is over excited, or bored and frustrated. Due to this it is a good idea to teach Bark & Shush when a pup and keep the practice in place.

This breed can also become very possessive of their toys and other objects, so teaching the Swap exercise when a pup and keeping it in place will avoid the problem of resource guarding developing.

Although the breed is normally friendly to people and other dogs, it can be 'otherwise', especially is early puppy socialization is not done. To ensure that your Westie will become a 'social butterfly', do make sure that early and continued socialization is done. 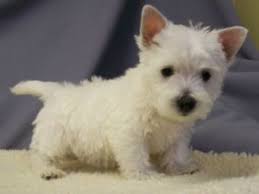 The Westie can get on with another Westie, however a lot of this depends on the breeding and also the dogs temperament and you must make sure that your dog has been well socialized so that it will accept another dog into the home.

When it comes to which sex get on better, your best bet is one male and one female (both sterilized), or 2 males together. Never two females. The vast majority of the time two females will get on well until about 8 - 9 months of age and them fighting for position tends to occur. When males have the odd altercation, it tends to be over quickly, but with females, it just intensifies and often the only solution is for one of the females to be rehomed. This is not just for this breed, but in general. As Westies can be otherwise to same sex dogs, if considering two, the safest would be male and female - both sterilized, and make sure a couple of months between them at least, and existing dog to be well socialized.

Bond with each other to the exclusion of you
​​Do they get on with other dogs?

​West Highland White Terriers are often more tolerant toward other dogs than many other terriers are, especially dogs that belong to their own family, however many of them can be dominant and aggressive towards strange dogs. A lot of this would depend on their breeding and also their social abilities - never underestimate the difference that early, and continued socialization can make.
Do they get on with other animals?

The Westie is normally a West Highland White Terriers are often more tolerant toward other dogs and cats than many other terriers are, especially dogs and cats who belong to their own family. But many Westies are still dominant or aggressive toward strange dogs.
​Are they good with children?
I do not recommend terriers for small children. Many terriers will not tolerate any nonsense from little life forms whom they consider to be below themselves in importance. Many terriers are quick to react to teasing, and even to the normal clumsiness that comes with small children (accidental squeezing of their ears or pulling of whiskers or stepping on their paw). Many terriers are possessive of their food and toys and will defend these from all comers, including children.
Health