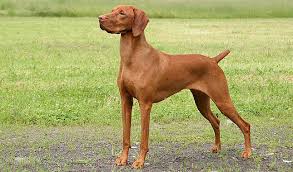 The ancestors of todays Vizsla were favoured hunting dogs of the Magyar bribes that lived in the Pannonian Basin as long ago as the 10th century. Ancient stone drawings estimated to be at least 100 years old, show the Magyar hunter with both his Vizsla and also his falcon which was used for hunting.
​
Vizslas nearly became extinct over the year, having been overrun by English Pointers and the German Shorthaired Pointers in the 1800's. Vizslas faced and survived several near-extinctions in their history, including being overrun by English Pointers and German Shorthaired Pointers in the 1800s, and again after World War 11, when it was found that there were only about a dozen of pure breeding left. Further breeding was undertaken from this stock and the breed once again became popular. In addition to Hungary, they were bred in Slovakia, Servia, Romania and Austria.

The Vizsla is registered in both UK and USA. In addition to being a suberb hunter, this dog makes a wonderful family dog provided it is in the right home.

This dog breed excels in retrieving game on all sorts of terrain, including water, as they are excellent swimmers. Not only are they great pointers, but they are excellent retrievers as well. No hunter could wish for a better companion.
​Is this the right dog for you?

These are true working dogs and need a lot of exercise. People that jog, take long walks, hike, hunt, or have a very outdoor lifestyle will be perfect for them. They also love to run. Not giving this dog enough exercise can result in a bored/frustrated dog, which could easily translate into behaviour problems, and they are noted to be chewers when they are bored.

They are very intelligent, and quick to learn,  but can be very independent and due to this not always easy to train - they like to do things 'their' way and a more experienced owner is definitely preferable. Teaching methods should be of the positive reinforcement methods and of short duration, during the day.

Although these are known to be naturally social dogs, if they do not receive sufficient early socialization at puppy schools and continued socialization they can be a bit fearful in strange situations. They also tend to be 'velcro' dogs and will 'cling' to their owners, both when they are nervous and in everyday life.

This is due to them been trained to be pointers and retrievers and work very closely with the hunter. They can become overly dependent on their owner, so very important that Alone Time Training is done and that the dog, in general, is taught to be confident.

This dog tends to 'talk' and will bark, whine and make various noises to get their opinion across! Due to this it is recommend that the Bark & Shush exercise is taught when a pup. Remember that when a dog is 'talking' like this, the more you pay attention to it, the more the behaviour is likely to occur, so rather ignore and walk away, if you dont want to interact, or if the 'talking' is becoming extreme. 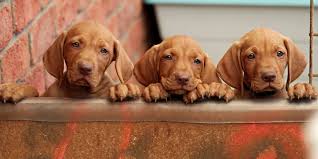 On average this breed gets on well with its own breed,  however you must make sure that your dog has been well socialized so that it will accept another dog into the home.

As above, it is known to be friendly, but having early socialization is very important to build a solid social foundation.
​
Do they get on with other animals?

There are a lot of owners who say that this breed is great with cats, as long as introduced to them when a pup. However, that does not mean that the cat next door is safe, and definately not good for a home with small animals such as birds, rabbits, guinea pigs etc.
​Are they good with children?

They are known to be very good with children and love playing games with them, however, there is no harm, and only positive rewards for socializing them with children or all ages and sizes when pups, and keeping up the socialization.  Children must always be taught how to approach and interact with a dog, and to treat them with respect.
Health

Some of the health problems that they can be prone to are von Willebrands disease, eye problems such as cataracts, entropion and PRA (progessive retina atropy), HD and various cancers including
including lymphosarcoma and hemangiosarcoma.