Toys you should avoid with a senior dog

www.vetstreet.com - one of our favourite websites - full of interesting articles and a wealth of information for pet owners - they also have a great magazine, Healthy Pet 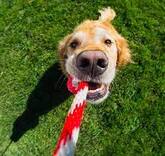 Your senior dog may not be as playful as he was when he was younger, but chances are he still relishes activities that stimulate his mind and body. Not only does he enjoy them, he needs them to keep mentally and physically fit. It's often too easy to assume an older dog is satisfied with a day of leisure, but that's not fair to your dog, who just may be waiting for you to entice him to play.

Unfortunately, many senior dogs want to play far beyond their physical capabilities. The dog who is a Frisbee fiend may still want to leap and spin to catch a flying disc, but that sort of wild gymnastics is not a good idea for older dogs. Seniors are more likely to have arthritis and to take more time recovering from injuries.

Tug games, too, may be too hard on your older dog's neck and teeth. If your once tug-crazy dog stops tugging as soon as he starts, it may be a sign of dental problems that you should have your veterinarian check.

Your dog doesn't necessarily know why a certain activity hurts, so it's up to you to make sure his teeth (and body) are up for a game of tug — or any other activity you think he'd enjoy. Many senior dogs simply can't resist some of the games they played when younger, so it's your job to not entice them with games that are potentially too strenuous.

As for what toys are best, most dogs get a little less destructive with their toys as they age, but some dogs never learn to take care of their toys. So the same caveats apply with seniors as with younger dogs:

Many older dogs would rather just interact with you than with a toy. Hidden object games, in which the dog seeks out a toy you've hidden in the house or yard by following your scent trail, are great games that stimulate the mind yet don't ask much of the body. Depending on the dog, just spending time together on walks around the block, in the yard gardening or on rides in the car can satisfy much of the older dog's need for stimulation.