​ Pete Wedderburn - https://www.petethevet.com/
​
Why do dogs behave badly? Here are the top ten reasons that I’ve observed in the animals that I treat as my patients.

As a vet in practice, I meet hundreds of owners with their dogs every week; over the thirty years since I qualified, that’s a huge crowd of people and a massive pack of dogs. I have witnessed long standing clients having a series of animals: taking on puppies, rearing them through to old age and eventual death, then getting another dog and repeating the cycle. This continuity of care is one of the rewarding aspects of being a vet in a small community: you get to know several generations of people and animals.

​Most dogs, like most humans, end up resembling their parents, not just in appearance but also in behaviour. Personalities of animals, just like people, are strongly controlled by genetics. If both parents are calm, obedient, gentle dogs, the puppies are more likely to turn out well. But if even just one parent is a boisterous, mischievous bundle of energy, then it’s more likely that a pup will grow into a similar type of animal. My simplest advice to people looking for a puppy is to try to meet both parents of the dog that you are considering.

Puppies have a golden period of malleability from around 3 weeks to 3 months of age. During this time, they are primed to form relationships easily with other animals and people,  and to learning that certain sights, sounds and experiences are not to be feared.. Over this same period, they also learn how to interact with others, using body language and vocalisation. Puppies who are well socialised during this period (e.g. living in a family home, encountering a wide range of people, animals and situations) are more likely to develop into calm, confident, well behaved adults. In contrast, pups who do not get adequate socialisation during this period (e.g. pups in intensive puppy-farm type environments) are likely to grow into adult dogs that are fearful of people and dogs, reacting badly to a range of sounds, objects and environments. In many cases, this fear leads to aggression, with serious consequences for humans around them, and ultimately negative outcomes for the dogs themselves. Choosing a well socialised puppy is one of the keys to having a well behaved adult dog. 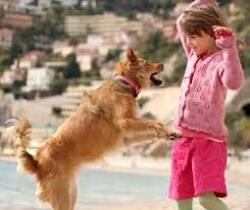 ​3. Dogs that are not trained enough cannot learn to be well behaved

Many people have an irrational and mistaken belief that dogs should somehow know “naturally” how to behave well. The truth is that “behaving well” is a human concept: dogs can’t be expected to know the difference between “good” and “bad” behaviour. They need to be trained to behave in the way that their owners want them to behave, and this takes time, patience and commitment. Typically, an owner needs to spend around fifteen minutes a day training their dog (not necessarily all at once: five minutes three times a day may even work better). This needs to happen day after day, week after week, month after month. It can be combined with daily activities such as walks, but it needs to be done. You cannot expect a dog to learn how to behave if you don’t teach them with regular lessons.

The old belief that dogs functioned in a rigid, hierarchical, pack-based social ladder has been shown to be false, but sadly many people still base their dog training on the principle of dominance. If a fearful dog growls or snaps, then trying to stop the behaviour by terrorising the animal with physical intimidation will only make the situation worse. To prevent bad behaviour from starting, and to cure dogs who have developed bad habits, it’s important to listen to behavioural scientists who are up to date with our current understanding of the canine brain. Trying to beat dogs into submission when they behave badly only makes things worse.

Some dogs start to tremble with fear if their owners even drive past their local vet clinic: this is a good example of the ability that dogs have to remember negative encounters. Vets now try to ensure that pets have a fear-free, pain-free experience when visiting clinics: the long memories of dogs means that they can be taught to remember positive experiences as well as negative.  Many types of bad behaviour stem from fear and anxiety (from separation anxiety to fear of fireworks to nervous aggression). If owners take care to avoid exposing their pets to strongly negative experiences, such bad behaviours are less likely to develop.

Hormones have a significant effect on dog behaviour. ​In particular, testosterone tends to make male dogs more dominant, more territorial, and more interested in engaging in conflict with other dogs. Many dog day care centres refuse to accept entire (unneutered) male dogs because of the increased risk of dogs picking fights with others. So in most cases, having a male dog neutered is likely to increase the chances of having a peace-loving, calm dog.

In recent years, scientists have realised that the impact of testosterone on dog behaviour is more nuanced: in a poorly socialised, timid dog, there’s a possibility that testosterone may have the useful effect of increasing a dog’s confidence. So for a dog with fear-based aggression, neutering could even make things worse. The right answer to the question “castrate or not” depends on the details of the individual dog, so if in doubt, it’s best to discuss this with your vet.

“He understands every word”. “He knows when he has done wrong”. “He didn’t mean to bite”. Owners often make these statements in the belief that their dogs have a human-like ability to understand what’s going on around them. The truth is that dogs are dogs, and while they have a remarkable cognitive ability, they cannot understand the subtleties of human language, and they don’t live by a human moral code. If owners try to correct bad behaviour in dogs by treating them like mini humans, the problem will not be resolved.

8. Dogs without boundaries are more likely to behave badly

Owners of some of the most aggressive dogs that I have to treat at my clinic sometimes tell me that their dog never behaves badly at home. They then confess that they never try to get the dog to do anything that the animal does not want to do. So the dog has no boundaries at all: he can do exactly what he wants, when he wants. This teaches the dog to behave without any restrictions, so that when a boundary is imposed (e.g. at the vet clinic when I want to examine the animal), the dog reacts with aggression. It’s important the the dog learns house rules, and that owners are strict about enforcing these firmly.
​9. Insufficient exercise leads to frustrated dogs that behave badly

A typical dog needs to be exercised for half an hour, twice daily. And being allowed out the back door to wander around the back garden does not count as exercise. Dogs need enough energetic, interesting exercise (visiting different places, meeting other animals, having the chance to run around off the leash). If they don’t get this, they end up frustrated, bored and prone to behaving badly.

10. Trying to solve dog behaviour problems on your own is unlikely to succeed

Dogs don’t learn to behave badly on their own: they are taught how to behave through interactions with their owners. So if you have a badly behaved dog, it’s very likely that you have inadvertently influenced your dog in a negative way. It’s impossible to objectively observe your own interactions with your pet, and that’s why it’s so useful to employ the services of a professional behaviourist. When somebody with training and experience watches you and your pet together, they are likely to identify key steps that you can take to improve the way that you influence your pet. Over time, this is the most likely way to resolve long term problems with bad behaviour.