Things to Know on Dog Farting Awareness Day
What are dog farts made of? And can they be less stinky?

https://blogs.scientificamerican.com/
(This is one of our favourite websites and has info right through from Technical, to yes, things to know about dog farting! The article is beautifully written, amusing and also scientific)

Even before the children’s book Walter the Farting Dog hit bookstores in 2001, the youngest members of society have known the truth. Dogs fart. They pass gas. The science-minded among us might refer to fart gas as ‘flatus’ (not to be confused with flautas, which might or might not give you flatus). Whatever you call it, dog farts can be silent but deadly, outrageously loud and stinky, even synchronized with a sneeze. In other words, dogs fart like us.

Capturing flatus is not to be taken lightly. In a section titled, ‘Collection and analysis of rectal gases,’ the researchers describe the outfit they rigged up to assess the farts. The main component is a jacket that looks like something companion dogs might wear in the rain, although this jacket comes with a sulfur gas detecting pump near the dog’s butt. To complete the suit, dogs wear disposable paper underpants to “protect the sampling device from external interference and help maintain proximity of the tubing to the anus.” Like I said, sort of like a rain jacket but with more farting.

Dog fart science
​
But what makes dog farts stink? The researchers took their cue from human flatus, which contains “the atmospheric gases nitrogen and oxygen plus the non-atmospheric gases carbon dioxide, hydrogen, and methane, also referred to as fermentation gases.” Sulfur gases, particularly hydrogen sulfide, are behind our visceral response of, “EWWWWW! Who did THAT?” This distasteful smell is commonly associated with sulfur-rich foods like cauliflower or broccoli.

To explore the composition of stinky dog farts, the researchers took a two-pronged approach. First, the fart suit measured what the dogs were dishing out, specifically hydrogen sulfide concentrations in parts per million. Second, an Odor Judge joined the team. Yes, someone was assigned to assess the odor of dog farts (and although the study does not spell it out, I presume the job was assigned using the highly advanced method of Who Was Out Of The Room When The Decision Was Made). The Odor Judge (who I hope wore a special sash or top hat) whiffed “each flatulence episode and rated the episode on a 1 to 5 scale, where 5 represented an unbearable odor and 1 was noise-only with no odor. A rating of 2 represented a slightly noticeable odor, 3 was a mildly unpleasant odor, and 4 was a bad odor.” I give you science.
​The Odor Judge’s assessments were then matched to real-time readings from the dog fart suit to uncover the composition of the most distasteful farts. As in humans, dog farts rated as more unbearable contained significantly more hydrogen sulfide than farts rated as less-noxious.
Can we decrease the stink in dog farts?

Identification of the stink is merely a first step. Dog fart suit in hand, the researchers set out to investigate which compounds, if any, could render dog farts benign.

In a study of human farts (where subjects first consumed pinto beans “to ensure flatus output” – you can’t make this stuff up), charcoal and zinc acetate reduced fart stinkiness. Another study found that Yucca schidigera reduced stink-inducing hydrogen sulfide concentrations in dog poop. While those substances are available as dietary supplements, don’t use any of them without veterinary approval.

To investigate whether a combination of charcoal, Yucca schidigera, and zinc acetate would decrease the stink in dog farts, dogs got back in the fart suit. (The researchers call it a “flatulence-collecting system for dogs.” We’ll have to agree to disagree.) Then the dogs consumed treats containing the three ingredients.** The fart suit captured and measured hydrogen sulfide concentrations, while the Odor Judge rated the farts.

The treats with the three ingredients did the trick! While the number of farting episodes did not decrease, the stench of the emissions was less aversive. With the treats, farting “episodes rated as 4 (bad) or 5 (unbearable) were significantly decreased, and [the] percentage of episodes rated as 2 (slightly noticeable) was significantly increased.” 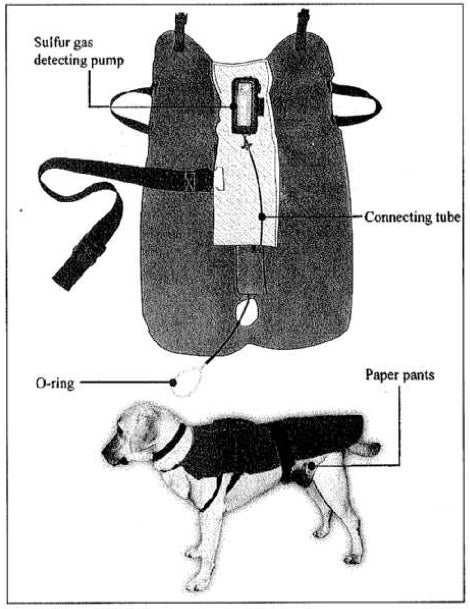 ** Additional note on dog farts: In the study, each fart-reducing treat contained “320 mg of activated charcoal, 2.5 mg of Yucca schidigera, and 17 mg of zinc in the form of zinc acetate dihydride.” Dogs were fed 1 treat per 11 lb of body weight. Jessica Hekman, DVM, MS and genomics PhD student adds, "We don't know if this stuff is safe to feed regularly. But that's one of the things good research does—provide ideas for future research. Like testing the safety of activated charcoal in anti-fart-stink dog treats."