The Threat of Stillness

(If anybody knows who the author of this article is, please forward us the details of same) 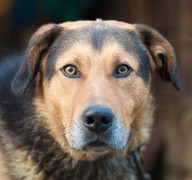 ​I recently observed a temperament test being conducted to determine whether a dog was aggressive toward other dogs. The dog in question was a large, strong breed, and there was much concern because of his past history. As I watched, it became obvious that the other dog being used in the test was very worried. She licked her lips and averted her gaze, both common stress signals. But something else concerned me a lot more: she seemed afraid to move a muscle. Was it because the dog being tested was lunging at her, barking, or otherwise being overtly threatening? No. In fact, he was standing stock still, head slightly lowered, body tensed, staring directly at her. I could feel the tension in my own body just watching it. Seconds later, the dog being tested exploded in a display that, had he not been on leash, surely would have ended in physical harm to the other dog.

We are taught things about dogs early on. We learn that a growl is a warning, and that if a tail is wagging, that dog is happy (although that isn’t always the case). If a dog is lunging and barking we know to be careful, because the dog is emotionally aroused in a potentially dangerous way. But what we’re not taught is to beware of stillness.

As most trainers know, the vast majority of what we call “aggression” is really fear-based reactivity. While it’s true there are dogs out there who are flat-out aggressive, there are a lot more who are acting defensively. All of that lunging and barking is their way of saying, “Stay away from me! Don’t make me come over there!” In truth, they don’t want to come over there. What they want is for the scary thing to vanish into oblivion, preferably yesterday. But think about this: if a dog really meant to attack, he would. The lunging, barking dog is spending precious energy on a display that, if heeded, will actually avoid conflict. But if a dog is very still, staring, body fairly humming with tension, he’s conserving his energy. That is a dog who should cause the hairs on your own neck to stand up, because he might very well attack.

I remember receiving an email from someone who had been bitten when he’d encountered a woman and her dog out in public. The dog had been standing very still and staring at him. Not realizing this was a cause for concern, he approached and reached to pet the dog. The dog bit him. He had no idea why. The answer was in the first line of his email, where he mentioned that the dog was staring. If more people learned to recognize that stillness for what it is—a precariously balanced moment that could result in violence—more conflict could be avoided. Of course, there is a difference between a dog simply standing still, and a dog who’s gone into that tense emotional state which can too easily boil over into decisively aggressive action. Unfortunately, many people really are unaware of the difference. See the photo above? That’s a stock photo. The photographer had as part of the description, “Large guard dog with expressive eyes staring in disbelief.” The only disbelief here is mine, that incredulity is the dog’s underlying emotional state.

Meeting this type of dangerous stillness with threats or aggression is never wise, and will almost certainly cause the dog to explode in violence. If you encounter a dog who is displaying this type of body language, don’t try to overpower or scare the dog. Instead, avert your own gaze, and back away verrry slowly. Notice I said back away, not turn and walk away; walking away offers the dog a chance to attack from the rear. If a dog has gone still when meeting your dog, get your dog out of there as calmly and quickly as possible.