www.boundangels.org
(A website dedicated to improving the relationship between dog and their person - well worth a visi 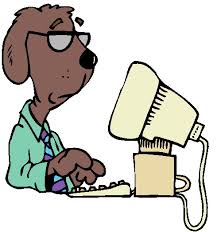 ​If you are reading this on your computer, you are aware of the unlimited power that this machine holds. It can compute complicated numerical equations, edit 3-D movies, compose a symphony, play complex video games, and write simple letters. All of these things are accomplished with a simple basic starting point, 1’s and 0’s. That’s right, all of the most complicated things that your computer does is broken down into 1’s and 0’s and through this basic fundamental, all of the complex things can be accomplished. This is called the binary code. Training a dog and understanding how a dog thinks can be broken down just as simply.

Your dog lives in the black and white. If we wish to understand our dogs better and communicate better with them, we need to walk in the middle. Many people think this “middle” is the grey, but its not, it is the line between the black and white. It is the point upon which we stand that allows us to jump from black to white without hesitation.

To break this concept down into rudimentary terms, let’s start our inter-species communication with the binary code of YES and NO. If the dog does something we like or approve of, we say YES and give the dog a treat to reinforce that the YES is a positive. Since dogs do not speak English we will teach them through the use of a “reward, i.e. treat” that YES is good. By the same token we need to teach the dog that NO is disapproval, and in order to do that we will withhold the reward.

A simple way to put this method into play is to watch a dog that is exhibiting negative behavior; for example jumping or barking. As long as the dog jumps and barks we do not reward the dog. Contrary to the belief that yelling NO will make him stop; yelling at a dog is a reinforcement that may put the dog further into drive. Instead of adding to the negative behavior, we can ignore the dog’s action by not giving him a reinforcement. Even a negative reinforcement such as yelling, hitting, or squirting a dog with water can, and does, serve as a reinforcement – be it negative or positive.

When a dog is jumping, we simply wait for the dog to STOP and say YES and give the dog a treat. The dog instantly starts to relate that the word YES and the treat mean the same thing- APPROVAL. When starting out with dogs that are not exhibiting negative behaviors we can simply give the dog a treat and a YES for looking at us, sitting and / or being calm.

The binary approach is the simplest method for the dog to understand, and the easiest for us to apply. Instead of trying to get the dog to understand that you are upset because of his actions and trying to change what he is doing into what you want him to do, 1’s and 0’s - YES or NO - You either like what he is doing or you don’t. If you like it what your dog is doing he gets a treat and a YES, if you don’t like it he gets nothing and a short NO.

It’s important to note that the NO is not a firm, yelling or angry NO. It’s more of a NOPE. If you put too much emphasis on the NO, it starts to carry more weight than the YES. Remember, it’s the way we say things that the dog understands more so that what it is we are actually saying. If we yell the NO, that is reinforcement in and of itself. The YES must carry more of a meaning and can be a happy-jolly-excited YES. Many times women will have an easier time adding emotion and men will have an easier time expressing disappointment. It is important for us to balance our emotions when it comes to dog training. This means expressing ourselves in a way the dog can understand.

Dogs live in the present and if we truly understand that we can appreciate that we must reward or punish in the NOW. If a dog did something negative or positive even 5 seconds ago, the NOW is gone. If a dog is jumping and stops for a second –reward that action NOW with an enthusiastic YES and a treat. Also, if a dog makes a movement toward a negative behavior and doesn’t follow through; for example he goes for your favorite shoe and you say NO and he stops, reward that immediately. If you don’t praise his accomplishments as soon as they happen, you’re not rewarding the positive steps. Your dog can get confused if you don’t include the YES and the NO. Using only YES gives a dog a one-sided perspective as to what you want or expect of him.

People often think that dogs can be trained in either a solely positive or corrective training method. This could not be further from the truth. Although I don’t agree with over correcting dogs, I do believe that a firm correction properly placed is not only fair but also necessary when dealing with certain negative behaviors. Remember, dogs live in the black and white, they understand that there is a payment or punishment for their actions, each and every one of their actions.

When setting out to train a dog or changing the behavior of a dog, we need to start with the basics of the binary system. We need to lead the dog along the path of what he is doing and find the stumbling blocks. As we approach each stumbling block we need to teach the dog positive and negative. If he’s heading in a direction that we like, we approve & reward – if he’s heading in a direction that we don’t like, we disapprove & punish (in most cases the punishment need not be more severe than the withholding of praise or reward). This method can be used to lure and shape behaviors by rewarding “little steps” along the way to complex exercises. At each step we reward the dog for the movement / action that is positive, and later we can chain these actions together by withholding the intermittent rewards for an ultimate reward at the end of the completed task.

Using this simple approach to training your dog will give you an advantage to understanding how to shape behaviors into those that you like. It can be a fun game to play with your dog on a daily basis. I use this approach in almost every situation I’m called upon to fix.

• When it’s time for a walk, the leash doesn’t get attached to the collar until the dog is calm and sitting down.
• If my dog tries to run out the door ahead of me, I close the door.
• I don’t put my dog’s food down until he sits and waits.
• My dog doesn’t get petted until he sits calmly in front of me.
• I don’t open the door to my dog’s crate if he’s crying or carrying on.

All of these exercises are part of the binary code of YES and NO. No matter how complex something may seem, remember it’s made up of two simple things – YES and NO. Focus on the positive aspect and reward it, shape the negative toward the positive and start to reward that. Eventually you will begin to see all behaviors as 1’s and 0’s or YES’ and NO’s.

I believe that all training should be fair to the dog. Since the dog has an unfair advantage in that we are trying to teach him our system, we must strive to make learning easy and fun for him. Giving a dog only two directions to move toward makes the path much clearer than a complex expectation. Remember, your dog doesn’t know what you want if you don’t teach him. Don’t expect your dog to be a mind reader. Whether you are approaching the training of your first dog or you have had dogs your entire life, try using the binary system and see how fair training can be for both you and your dog.

​Dog training has inherent risks. I urge you to research and consult a professional for training advice.