Teaching your dog to weave at home 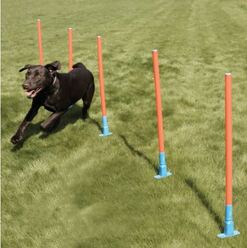 ​Carolyn Menteith explains how to introduce your dog to weave poles...

​
Like every other type of agility, you don't need a Border Collie to take part in weaving and you don't need lots of expensive equipment either. I worked with a very bright and bold puppy called Fiddler, from Dogs Trust's Harefield centre, to show how easy it can be to start teaching weaves.

To ensure Fiddler was comfortable with me, I acquainted him with my treat bag and he soon worked out that the only way he could reach the contents was by doing something I liked. He was confident and happy to explore everything, so I had no concerns about introducing him to the equipment - a more nervous dog or puppy would have needed far longer.

To begin weave training, tempt your dog through your legs with a treat. Some dogs find it worrying to go underneath people, and some dogs don't always follow food with enthusiasm, but Fiddler was happy to follow a piece of cheese wherever it went. With a treat in both hands, I got him to follow the cheese until he was happily charging in and out of my legs. I also tried it with a toy, but he was only interested in food. Always remember that every dog will have different preferences over what he finds rewarding.

I then progressed to asking Fiddler to follow my hand without a treat in it, rewarding him when he did. This means the dog has to use his brain rather than just blindly following food.

As soon as your dog is comfortable going in and out of something, introduce him to the weave poles. The ones in the training barn at Dogs Trust were a bit noisy as they had a metal base and could have been scary, but they weren't a problem for the fearless Fiddler. If you train at home you can buy a set of inexpensive weave poles that push into the grass, or if you are working indoors where such poles would not be practical you could insert plastic poles into cones.

To start with I threw a treat to the other side of the poles, so Fiddler had a chance to step over the metal bar on the ground and learn that it wasn't scary. Using just one section of the weaves and with only two poles, I then used a treat to lure him round the weaves the same way I had round my legs. While this was only fun agility training, I had no idea where Fiddler's future was going to take him and so just in case he became an agility dog, I made sure he went into the first weave with his left shoulder next to the pole - in agility competitions the dog always starts on the right hand side of the first pole.

From here it was easy to add more poles. Although Fiddler was just following the food, he was learning to weave between the poles; he was having a new experience that would build his confidence and joy in learning for the future. Once Fiddler was weaving happily, I started challenging him a little by using a verbal command to get him through the poles, instead of just a treat. When he was getting the idea, I used my left leg a little to shoot past the weave pole.

Give me a cue

That was more than enough for Fiddler in his first weave session, so he had a break while I worked with another dog, a Staffie called Bacon, who had found a new home with her owner, Jo-Ann Essex. Bacon was lured with a treat through the weave poles but this time with the addition of a cue word. Jo-Ann used ‘Weave' as her cue for each pole - some people prefer ‘In' and ‘Out' but you have to be quick. Once Bacon understood the cue, Jo-Ann moved on to doing a few weaves for a reward, and then completing a whole row before giving a reward.

Teaching the cue takes time and patience; some dogs understand it very quickly, while others take weeks or even months of repetition. Take each step really slowly, and always be quick to make sure the dog doesn't learn to skip poles if he gets too fast. And as always, keep it fun. Once the dog has got the hang of it, make sure you practise with you on both sides of the poles. You need to be able to get into the weaves, and back out again, from either side.
​
Use any chance when you are out and about to practise your weaves. Fence poles and trees can be useful and so can people's legs! Everything that you do helps to build your bond with your dog, gives him confidence, and prepares him for agility classes. We took Bacon outdoors to practise her weave skills with distractions in a new environment. Always remember that what your dog can do in the peace and quiet of their familiar home environment may not be what they can do outside when there are sights, sounds and smells that may be far more interesting.