You may enjoy our Facebook page. Our aim is to supply knowledge and education about dogs to owners to improve the relationship and the dog’s lives. We do not inundate you with posts, an average of 5 articles per week, and the odd Did You Know, or interesting article. Please do share with family and friends, as the more we work together, the more we can improve dog’s lives!

Tails tell their own Tale

By By Sandra Blakeslee – The New York Times. 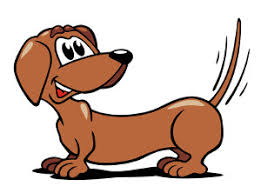 There’s a method to their wagginess, Italian study discovers. Every dog lover knows how a pooch expresses its feelings.

Ears close to the head, tense posture, and tail straight out from the body means ”don’t mess with me.” Ears perked up, wriggly body and vigorously wagging tail means ”I am sooo happy to see you”

But there is another, newly discovered, feature of dog body language that may surprise attentive pet owners and experts in canine behaviour. When dogs feel fundamentally positive about something or someone, their tails wag more to the right side of their rumps. When they have negative feelings, their tail wagging is biased to the left.

A study describing the phenomenon, ”Asymmetric tail-wagging responses by dogs to different emotive stimuli” appeared in the March 20 issue of Current Biology. The authors are Giorgio Vallortigara, a neuroscientist at the University of Triestein Italy, and two veterinarians, Angelo Quaranta and Marcello Siniscalchi, at the University of Bari, also in Italy.

”This is an intriguing observation” said Richard J. Davidson, director of the Laboratory for Affective Neuroscience at the University of Wisconsin in Madison. It fits with a large body of research showing emotional asymmetry in the brain, he said.

Research has shown that in most animals, including birds, fish and frogs, the left brain specializes in behaviours involving what the scientists call approach and energy enrichment. In humans, that means the left brain is associated with positive feelings, like love, a sense of attachment, a feeling of safety and calm. It is also associated with physiological markers, like a slow heart rate.

At a fundamental level, the right brain specializes in behaviors involving withdrawal and energy expenditure. In humans, these behaviours, like fleeing, are associated with feelings like fear and depression. Physiological signals include a rapid heart rate and the shutdown of the digestive system.

Dog tails are interesting, Davidson said, because they are in the midline of the dog’s body, neither left nor right. So do they show emotional asymmetry, or not?

To find out, Vallortigara and his colleagues recruited 30 family pets of mixed breed that were enrolled in an agility training program. The dogs were placed in a cage equipped with cameras that precisely tracked the angles of their tail wags. Then they were shown four stimuli through a slat in the front of the cage: their owner; an unfamiliar human; a cat; and an unfamiliar, dominant dog.

In each instance the test dog saw a person or animal for one minute, rested for 90 seconds and saw another view. Testing lasted 25 days with 10 sessions per day.

When the dogs saw their owners, their tails all wagged vigorously with a bias to the right side of their bodies, Vallortigara said. Their tails wagged moderately, again more to the right, when faced with an unfamiliar human. Looking at the cat, a four-year-old male whose owners volunteered him for the experiment, the dogs’ tails again wagged more to the right but in a lower amplitude.

When the dogs looked at an aggressive, unfamiliar dog, a large Belgian shepherd Malinois, their tails all wagged with a bias to the left side of their bodies.

While some researchers have argued that only humans show brain asymmetry (based on the evolution of language in the left brain) strong left and right biases are showing up in the brains of many so- called simpler creatures, said Lesley Rogers, a neuroscientist who studies brain asymmetry at the University of New England in Armidale, Australia.