These are the official pictures of the dogs rescued from smugglers on the Angola/Namibia border courtesy of The Hopeful Foundation. Please if you think one of these dogs may be your, contact Milan  at milancronje@polka.co.za. Please network these far and wide so that dogs and owners can be reunited.


To be updated on the latest news on the dogs, please link to their website below 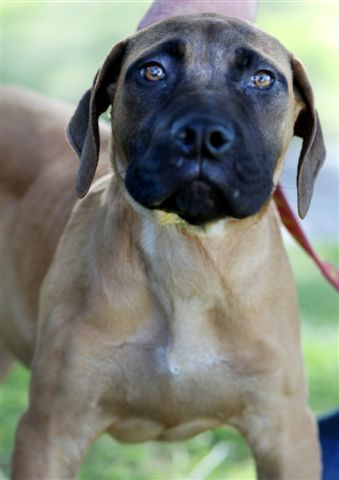 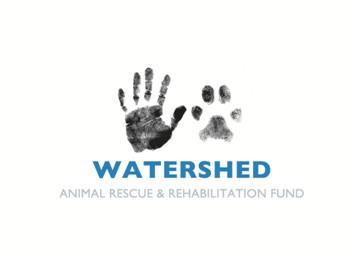 I want to put an urgent request to you. Please assist us to distribute this information in the media. We need the possible owners of the dogs currently on the Angola border to go to their nearest police office and get a case number for their dogs. This is very important that the case numbers needs to be provided to claim the dogs.

The following needs to be done to claim the dogs :

Cape Town - A South African woman, her husband and her daughter, who were trying to get dogs smuggled from the country back home, were allegedly locked in a room for hours in Angola, allegedly by officials who had helped the smugglers. They were reportedly being held for their own safety

THE arrest of three men in Windhoek over the theft and disappearance of dogs from people’s homes could be the tip of the iceberg indicating the presence of a large-scale dog-theft syndicate.
The suspicion has arisen that the thefts might be because of a shortage of certain breeds of dogs in Angola which has created a market for dogs stolen in Namibia.
Three suspects made their first appearance in the Windhoek Magistrates Court on Wednesday morning to face charges in connection with the theft of pedigree dogs valued between N$2,000 and N$10,000 from homes in Windhoek.

The suspects, Nathan Körner, Andreas Shapwana, and Abdul Jardien finally ran out of luck when police arrested them.
Police caught them red handed after one of the pets they sold to an Angolan woman fell sick and she had to take it to a veterinarian for treatment. This led to the arrest of the gang. Isabel Dos Santos came to Namibia from Angola to visit her daughter Vilma Moises who lives in Windhoek.
As part of her visit a friend who lives in Angola only identified as Luzolu assigned her to buy a special breed of dogs in Windhoek.

“Luzolu sent me to buy a pair of Rottweiler and a pair of German Shepherds and gave me US$2,000 (N$16,000). He said that he would contact a man in Namibia who sells dogs and I had to get them from him.”
“When I got to Windhoek, Lolo (Nathan) called me and told me he was coming to collect the money for the dogs. He however only brought the male Rottweiler for which I paid N$3,000,” she said.
At the time (Tuesday) Körner had only stolen one Rottweiler from the home of Tobi Brand in Pioneerspark, and planned to return for the bitch
.
According to Brand, Körner tried to steal both dogs from his house but the female escaped.
Körner sold the dog to Dos Santos the following day (Wednesday) and promised to bring the female Rottweiler later. He however brought a German shepherd which she bought for N$2,000.
“He wanted me to give him the money before I even saw the dogs, but Luzolu had warned me that I should not give Lolo any money beforehand because he was a crook,” she said.

The Rottweiler then fell sick on Friday night and Dos Santos became worried as she had planned to travel with the dog to Angola the following day.
“The dog was vomiting all night and I became worried. At around midnight, Lolo came rudely knocking at my door, asking me to give him back the dog.

“I told him that the dog was fine and that we were sleeping, so he should come back in the morning. I think he wanted to steal the dog from me because he even started demanding more money. Who asks for money at that time of the night?”
Dos Santos ironically took the sick dog to the Stepping Stones Vetenary Consultancy Clinic in Windhoek on Monday morning, the same clinic where Brand also took his dogs for vaccinations.
She produced the dog’s record card that she obtained from Körner and the veterinarian realised that it was fake and had an IMEI serial numbers for cellphones instead of details for the dog’s vaccination. She then called the police and Dos Santos implicated Körner.
Police the arrested Körner and two accomplices who made their first appearance in the Windhoek Magistrates court on Wednesday morning.
The court granted them bail of N$3,000 but they failed to pay and will remain in custody until their next court appearance.
City Police described Körner as notorious for stealing dogs from people’s houses and selling them to Angolans. The buyers take most of the dogs to Angola and they can never be traced back to him.
any@observer.com.na

It was reported to the NSPCA on Wednesday 22 August 2012 that the dogs had been...returned to Namibia by the Angolan authorities. Then conflicting information was received and we were advised that the dogs were in Angola.
The NSPCA is awaiting an official independent report on the situation in order to establish whether our offers of assistance can be put to constructive use.

The latest information which can be confirmed is that there has been “interference” by individuals acting without any mandate which has led to the Namibian authorities becoming frustrated to the point that they will no longer have any involvement in the resolution of the matter.

It is understood that the dogs are now in Angola and that their welfare/future lie in the hands of the Angolan authorities and legislation of that country.

There is no animal welfare in Angola and the NSPCA has no jurisdiction in that country.
06.45am Aug 23

The wonderful team that is fighting for these dogs both in Angola and SA, are still trying to get them home and resolve this situation. Due to the very sensitive nature of what is happening at present no information is being made public,  and all the posts on FB have been stopped. They will update us as soon as possible and we, in turn will post an update here. Please let’s just bear with them and keep our prayers going 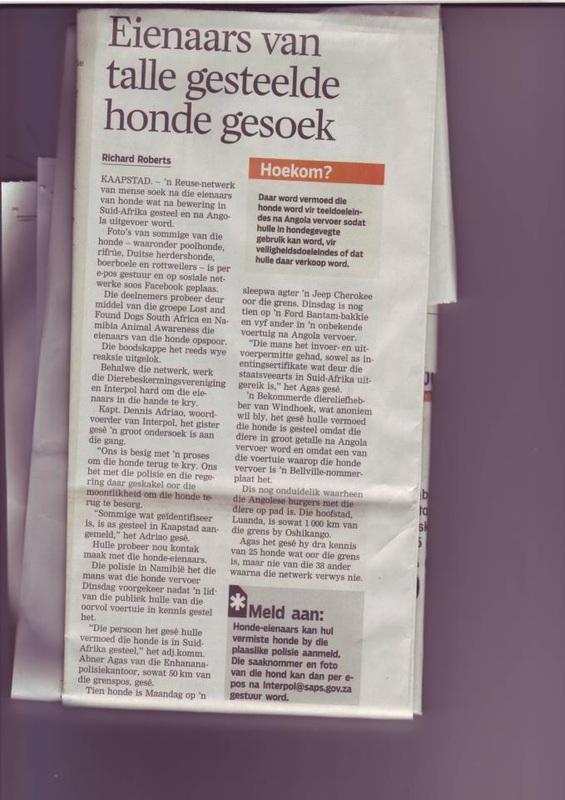 Further “consignments” of dogs from South Africa have crossed the border from Namibia on their way to Angola despite the concerted efforts of the National Council of SPCAs (NSPCA) and the Windhoek SPCA to stop them.

A concerned Namibian citizen who saw the first overcrowded consignment intervened and the Namibian police detained the Angolan national transporting the dogs. The Namibian police detected some irregularities with documentation relating to the dogs including the rabies vaccination certificates which had been issued by a South African veterinarian on 08 August. This meant that the animals were only legally permitted to travel across a border after 23 days.

Upon learning that these animals were being held, the Windhoek SPCA made contact with personnel from the NSPCA in South Africa who offered assistance. Namibian SPCA personnel were despatched to the police station which was five hours’ drive away. The Namibian police officers had given an undertaking to hand the dogs into the care and custody of the SPCA in order to scan the animals for the presence of microchip identification. If it was found that the dogs were stolen, the owners in South Africa could be contacted.

Before the Windhoek SPCA arrived to collect the dogs, they were advised that the police had released them all back into the possession of the Angolan national and it was confirmed to the NSPCA in writing at 22h15 on Tuesday 21 August that the dogs and the Angolan national transporting them, had crossed the border and were in Angola.

We found the actions of the Namibian police to be disappointing as not only were there discrepancies in the dogs’ documentation but that the dogs had not been retained by the Namibian authorities long enough for it to be established whether they were stolen.

To our surprise, an hour ago we received an update from the Windhoek SPCA that the dogs had been stopped yet again, this time by the Angolan border police and were being sent back to Namibia.

The NSPCA assures the public that the issue of cross-border trafficking of live animals is at the forefront of our work and concerns. Action can be taken from the South African side to make it difficult for the traffickers:
· South African enforcement agencies need to be vigilant, meticulous and decisive. Training has been undertaken by the NSPCA at specific border posts and this has led to tip-offs and interceptions of such “consignments”.
· Veterinarians can also play an important role through increased vigilance.

In previous cases, the Angolan nationals who were taking dogs across borders had either purchased puppies directly (and legally) from breeders or had obtained dogs through “free to good home” advertisements especially on web sites.

If these dogs were stolen, the issue of proof of ownership arises. For this reason the importance of ensuring that companion animals have microchip identification is again emphasised. It is tamper-proof and permanent.

The public is assured that at all times we remain dedicated to the welfare of animals and that we shall work tirelessly on the horrendous issue of live animals being taken across our borders for unknown purposes.

Why dogs are being taken into Angola remains a grey/unknown area.

By: CATHERINE SASMAN and TANJA BAUSE 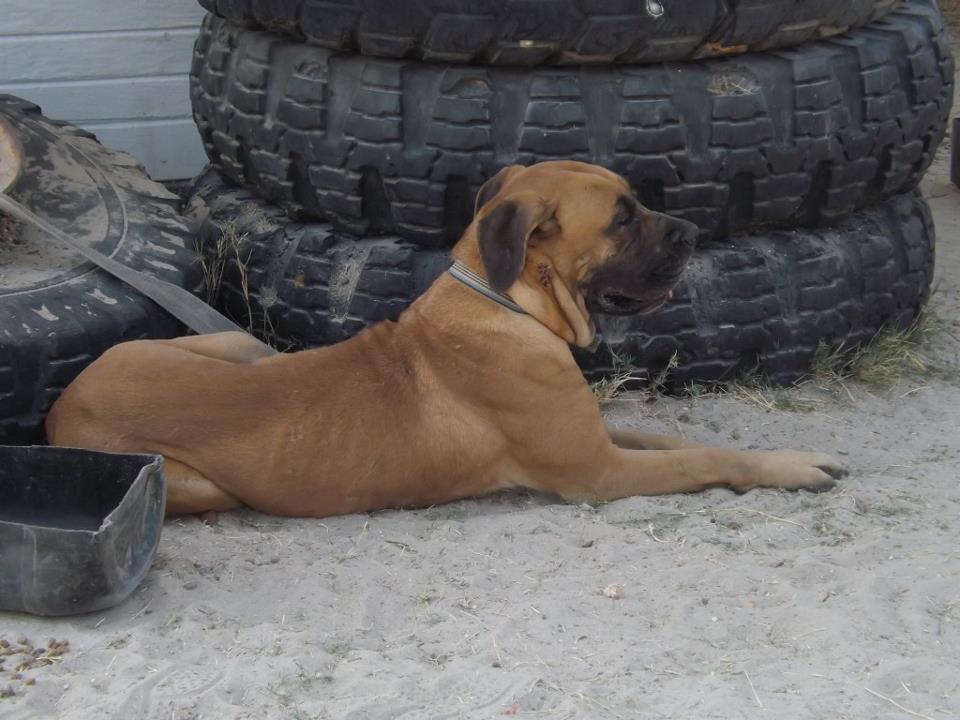 The editors and publishers of this website and magazine can not accept liability for any errors or omissions contained on this website or in the magazine. While reasonable precautions have been taken to ensure the accuracy of the information and advice provided, we cannot be help responsible for any damages or inconvenience that may arise thereof.

The ownership of all trademarks is acknowledged. The opinions, views and contributions found on this website and in the magazine are not necessarily those of the publishers or owners of Friends of the Dog.