Danie While at Fallen Angels in May this year, we were asked to help with gorgeous Danie. She absolutely loves people but can be something of a hand-full - to put it mildly! When being taken our for a walk, she would lunge, twist, spin, throw herself on the ground, and when you started to actually walk with her, a dislocated shoulder was a possibility! She xcwas also not adverse to giving a little nip to her handler, due to total over-excitement. She also got so excited passing other dogs that unless she had a toy in her mouth, would go totally over the top. In a few short sessions, this beautiful girl was Sitting, Downing, walking on lead beautifully, going through gates with not problem. If you click on the picture of Joe with her by the gate, you will see the huge smile on his face! Danie is still being worked and will make the most amazing companion for one lucky family.
The Calming Procedure - Normally people going to say hello to a dog in a shelter,  results in the dogs jumping up at the fence, pushing each other out the way, getting over-excited, and often fights break out. If we bear in mind that there is only a 20 second period where an emotional connection is made with a potential adopter, with the behaviour above, it is doubtful that will happen. By bringing in the FODS Calming Procedure, not only are the dogs stress levels reduced, fights are less likely to break out, and, most importantly, the dogs can really be seen as being better behaved and the chances of an emotional connection with a potential adopter more likely. 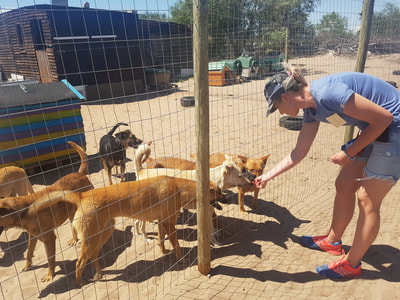 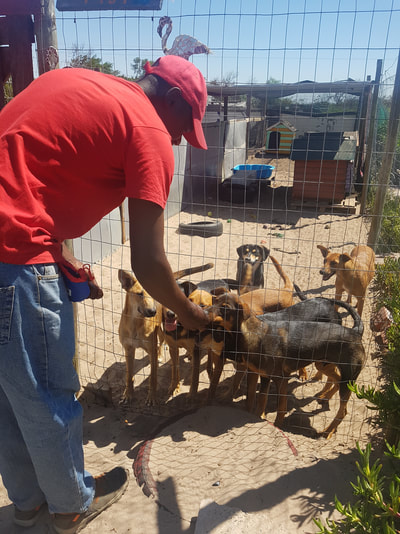 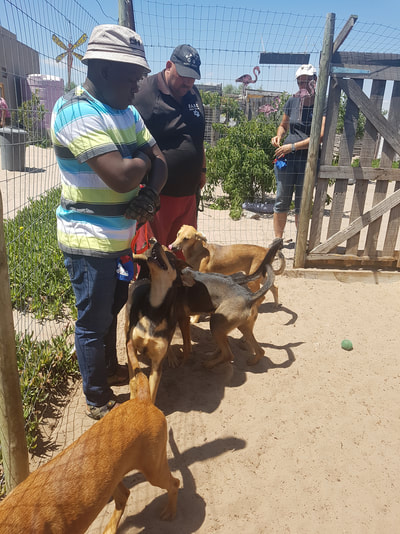 Walking on Lead - Dogs on the program are taught to walk quietly and calmly on lead which makes them much more adoptable. Additionally, walking quietly and calmly lowers stress and the chances of reactive behaviour towards other dogs 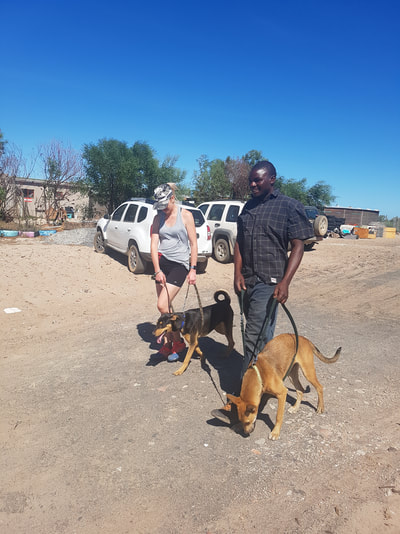 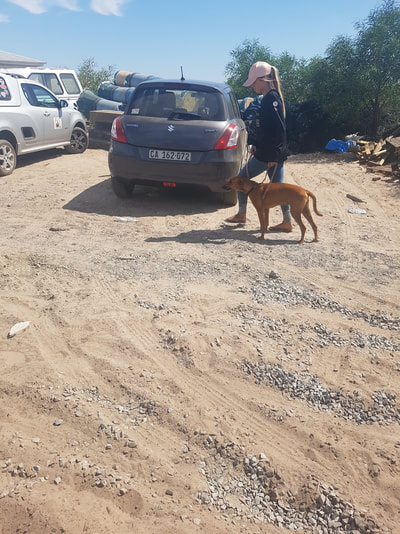 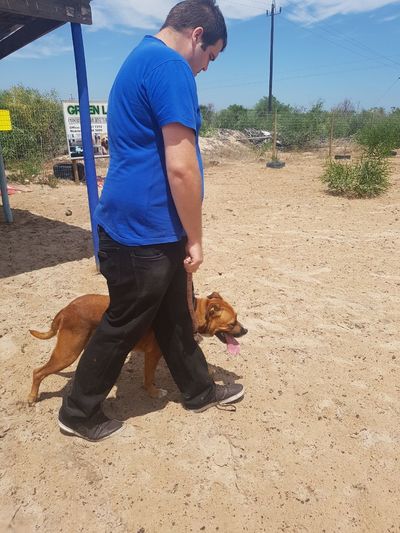 Lily's Story - Lily was not coping in the shelter and went to live with her new mom, hoping that this would bring her our of her shell. After 3 months there was no improvement - she stayed in the kennel and would eat and go outside at night when her mom had gone to bed - this is the point we got involved. Her mom was shown some techniques to make Lily feel more secure, as well as some TTouch. Below, over a 2 month period, you can see her progress. Lily is now a much more secure and confident dog and interacts with her mom, lies in the lounge with her and sleeps in her bedroom. Lily is still a work in progress but with the confidence she has gained as well as trusting her mom, we are all sure that Lily will fully develop her confidence. 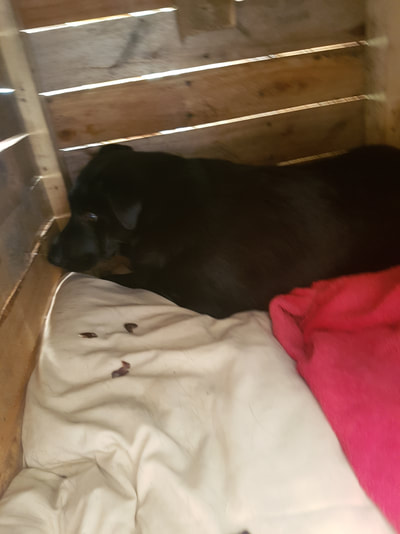 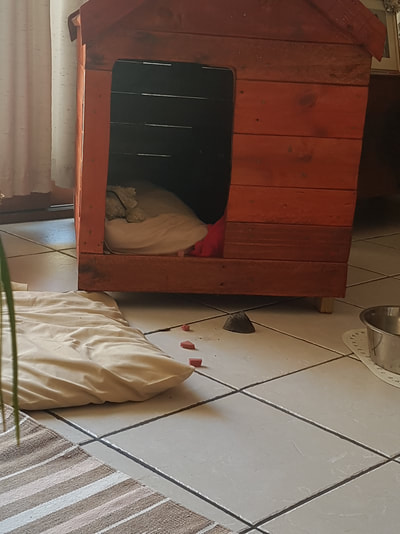 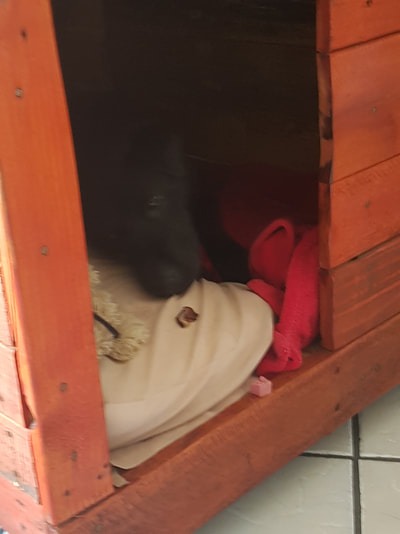 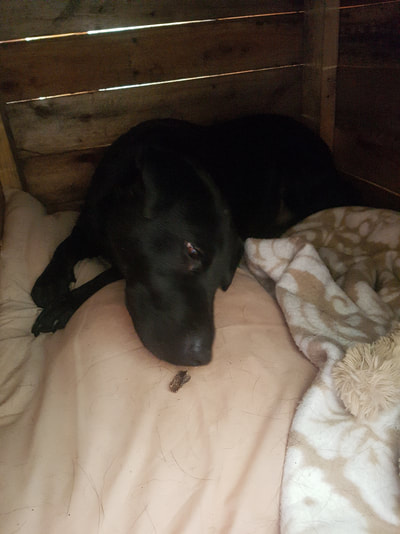 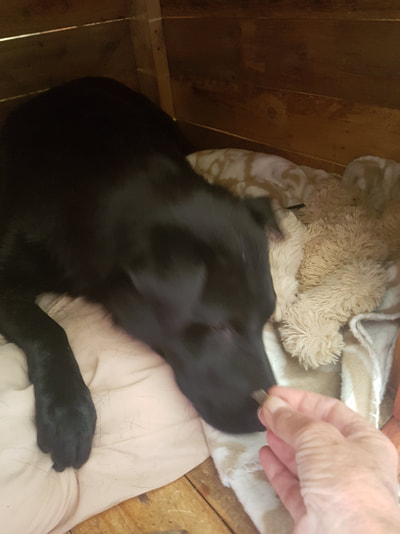 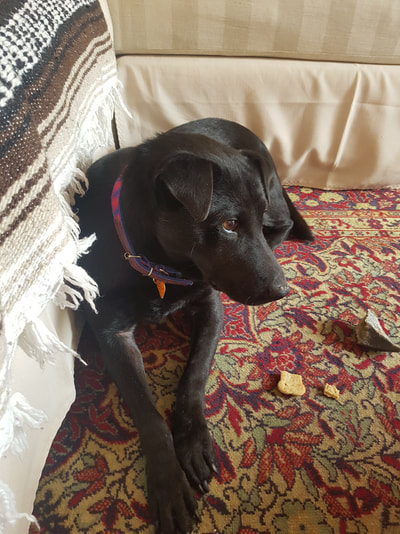 Scarlett, a young female Xbreed,  was rescued by TAG early August 2019.  Found in the veld in Bredel, Kempton Park, assumed abandoned.  Very fearful and hand shy. She bit Annie (Founder of TAG and an amazing lady) on the first day when Annie took her out of crate.  From day one Scarlett would not come out of her kennel. If anyone approached her run and she was out, she would run straight into the back of her kennel and turn her body away (was too dark to get a pic of her in kennel). Anne worked with her from a distance utilizing some of the tools we make use of, plus a lot of liver bread! A dog that is very shut down will not eat, so this too took time. After Anne gained her trust and was able to work with her in the kennel, as Scarlett showed a lot of interest in the dog in the next run, Feather, who is a 9 month old Belgian Shepherd/Lab mix, it was decided that they had to get Scarlett into one of the play runs so that the introduction to Feather could take place. Putting a fearful dog with a sociable one, very often helps tremendously to build confidence.
Below Scarlett is learning to start to trust new people in her life. At each new introduction, the whole process starts at the beginning again – it takes time to build a dogs trust and must be done at her pace. The person working with her is using dogs body language to show Scarlett that there is nothing to fear. Scarlett is making progress every time she is worked with, and we look forward to sending you pictures of a happy and relaxed dog soon!
​
One week later, with three additional session, look at the difference in this fantastic dog! We hope that our next pictures are Scarlett going to her Forever home - well done to Anne and her Team at TAG !
RUBY - FROM A PUPPY FARM AND ADOPTED FROM SPCA
Scotty and Charmaine went to help a gorgeous 4 year old Great Dane, who was the only one of 26 dogs rescued from a Puppy Farmer to survive, the rest were PTS. This poor dog was in dire straits. She had been adopted by the family in Oct of last year, and as of the end August this year, was still not moving around or interacting. Her ‘safe place’ was between a wall and a pole and this is where she stayed the majority of the time. She would allow only the owner to touch her, but not happily - from a behaviour point of view, this was a case of Learned Helplessness - she was allowing the interaction simply as she had no other option. Apart from this she would not interact with the family, and was only known to move around at night. A further concern was that the other dog died about a 8 weeks ago and Ruby became even more depressed and was not eating.
The family report that she has started to interact with them, especially the daughter, and went up to one of the daughters friends and asked for some love - we are waiting for some pictures of this.. The family will be working with her over the next few weeks and will call us when Ruby is ready for the next stage of work. We are so proud of her – what incredible courage this took – she has a long way to go, but even if she is only friendly with the family, it is a much better quality of life than she had before
Groundwork in the Playground (Central Park) After the shelter course held at Fallen Angels in 2017, they realized how important it was to have a place for the dogs to be able to run together off lead and where Groundwork could be done with the dogs. The groundwork helps dogs to develop balance, co-ordination, develop confidence, stimulates them mentally and helps to build a bond with humans. 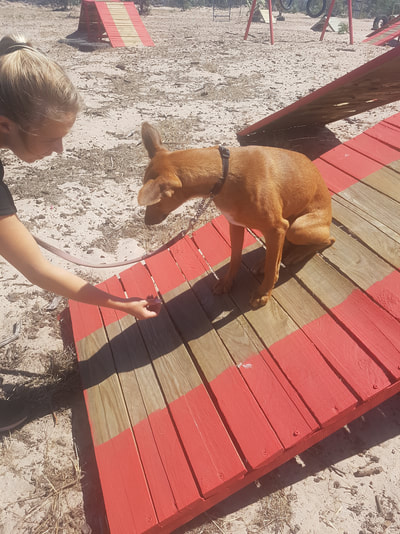 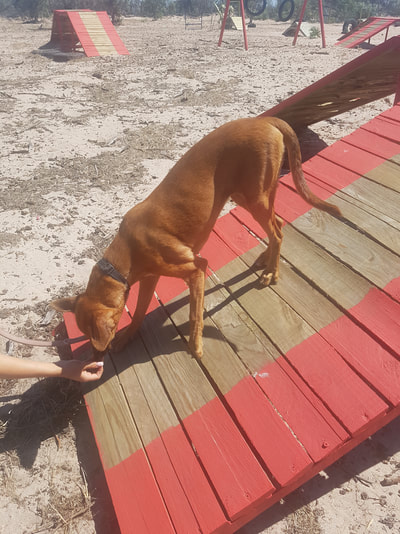 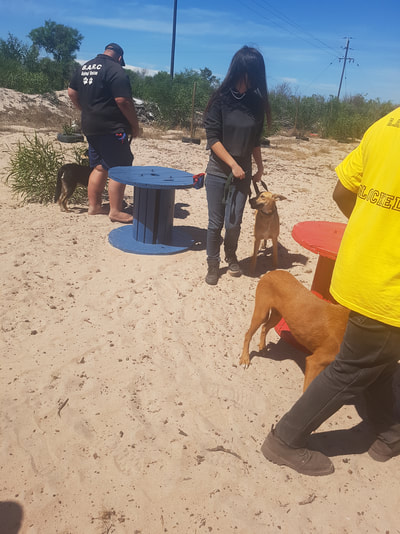 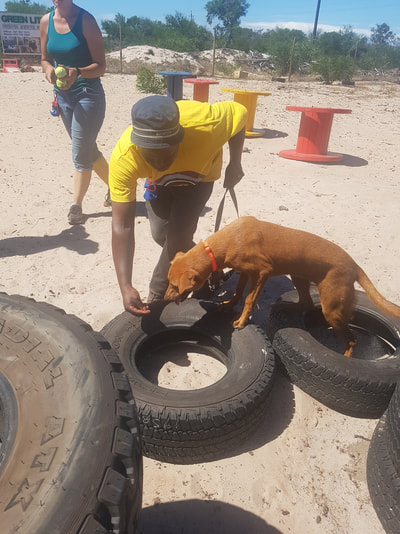 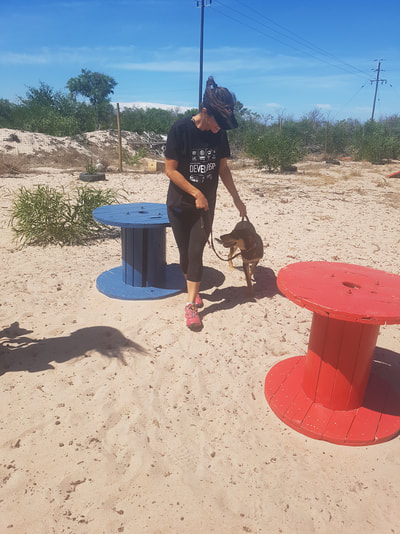 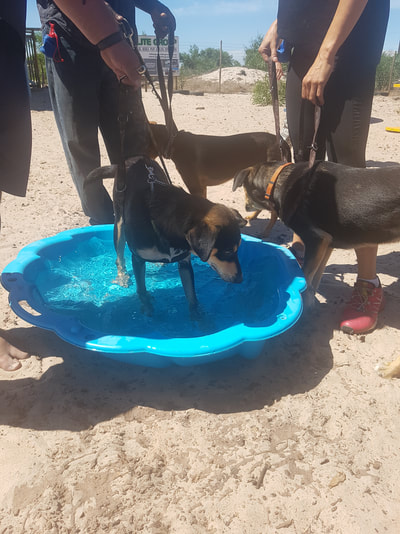 TTouch - TTouch plays a major role when it comes to working with dogs in shelters and the difference it makes, really does need to be seen to be believed. TTouch is taught on the Shelter Course and used daily on the dogs in the program and in the shelter when possible. 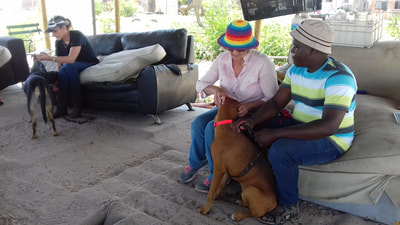 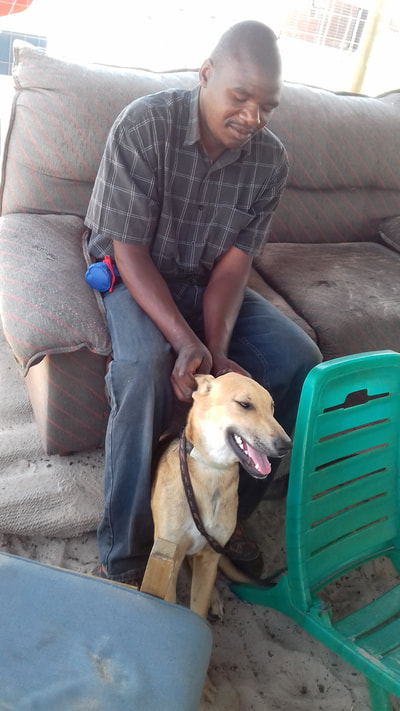 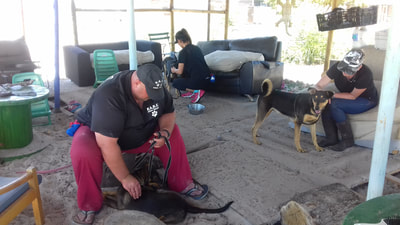 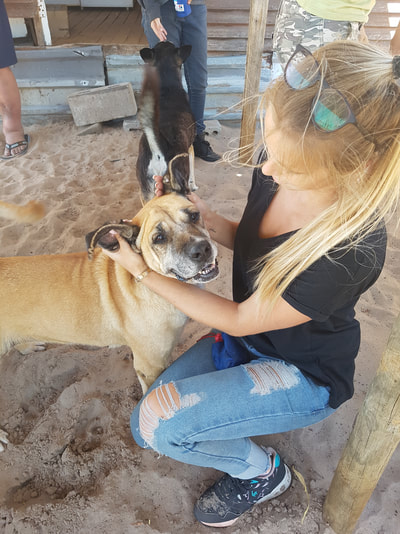 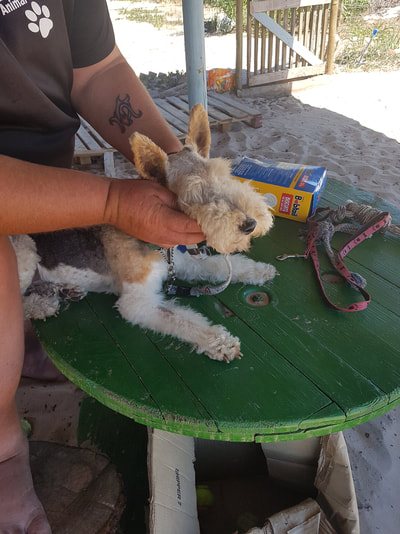 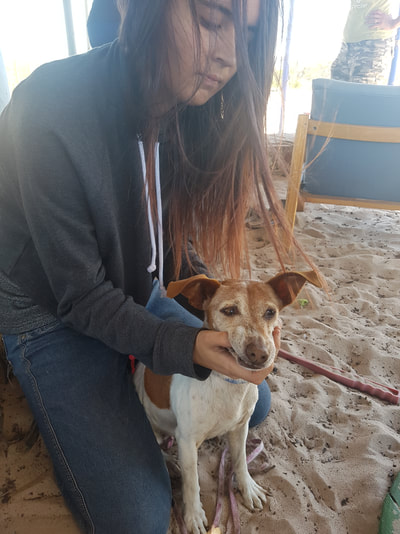 Basic Exercises - dogs on the program are taught all the basic exercises to make them more adoptable. Learning these skills,  also helps the dogs to de-stress, build confidence, stimulates them both mentally and physically - the dogs are also taught how to play. 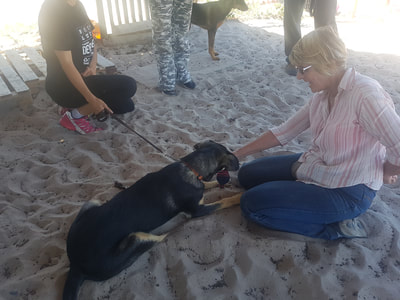 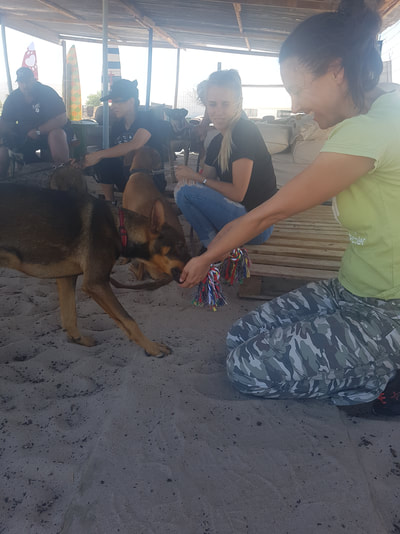 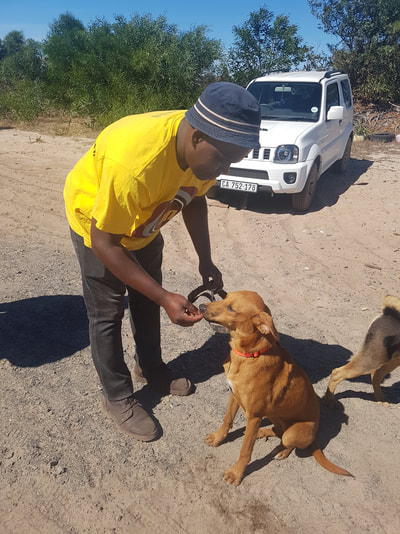 Behaviour Sessions - here are some pics of adopters with the new addition to the family after having had their private session. We also keep in touch with adopters so that we can help to solve any potential problems. There is also a picture of a group on a shelter course. 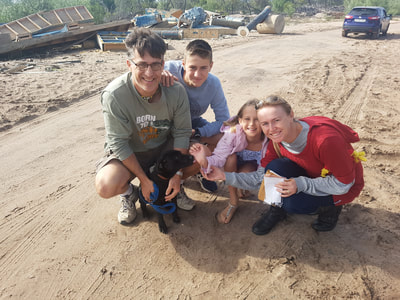 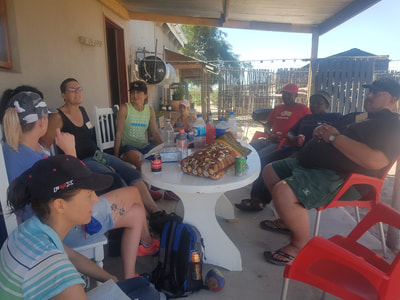 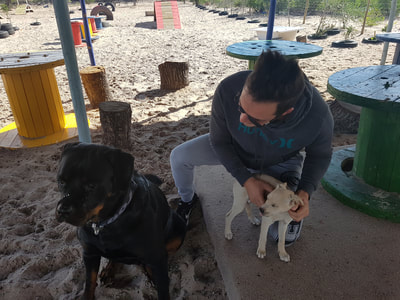