Some answers to the great SOYA-ESTROGEN debate. 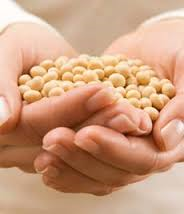 As with everything in life, there are 2 sides to any story. I hope to supply you with most of the answers in this article. Soy (in moderation) is in fact a very healthy and beneficial substance to include in our diets, despite the fears some consumers have on its estrogenic effect in children. There are times to avoid its use though, especially during the infant stage whilst breast or bottle feeding.

Soy protein; derived from Soya beans, has an amino acid composition very similar to meat or egg and is thus regarded as a complete protein. This is a high quality and valuable protein source for vegans and vegetarians.

Phytosterols (plant derived steroid-like substances) in soy lower the “bad” cholesterol in the blood and can also relieve Benign Prostatic Hypertrophy (BPH); the most common reason for enlarged prostates in older men. They may also aid in the production of steroid hormones including testosterone.

Complete soy products (not so much the soy protein extracts) contain isoflavones. These are phytoestrogens or plant based substances with an estrogenic effect. The isoflavones in soy have about 0.2 to maximum 2% of the estrogenic activity of estradiol (the primary human estrogen). Phytoestrogens have a balancing action on estrogen levels. If levels are low (as in menopause) they will increase the estrogenic effect, but if levels are high (such as in PMS) they will decrease the estrogen effects by competitive inhibition (explained later). Soy isoflavones help to treat and prevent osteoporosis. Genistein (one of the soy isoflavones) has additional anti-cancer properties.

A frightening fact is the increasing levels of oestrogen in the world water supply, which then end up in our food chain. WHERE DO THESE ESTROGENS COME FROM?

Synthetic hormones including estrogens have been used in the livestock industry to fatten animals and make them grow faster. Although many of these substances have been outlawed, livestock and poultry are still hormonally manipulated for optimal production and maintain high hormone levels in their tissue.

Many of the pesticides and chemicals we have sprayed on our crops over the last 50 years have mild estrogenic activity. Some of these have been banned, but not all. Most of the banned chemicals e.g. DDT, dioxin and PCB’s are resistant to biodegradation, they remain in the soil and become part of the food chain via our vegetable crops and pastures for livestock. These substances are then eaten by humans and animals, often not excreted but accumulate in our bodies; lowering our toxic threshold to undesirable substances.

Massive amounts of birth control pills are being taken by women worldwide, the hormones and derivatives then excreted in their urine and ultimately landing in the world water supply.

These are not even the only estrogenically active substances we have to worry about; PLASTIC is also mildly estrogenic. Most of our food is wrapped or sealed in plastic and we even feed babies from plastic bottles.

This estrogenic effect is most damaging to the developing organism, animal, or human. It is thus essential to maintain a healthy hormonal balance in your food intake during pregnancy, and for the infant and developing child to puberty.

The interesting and rather unexpected fact is that soy isoflavones may actually help to protect us in situations of high estrogenic exposure. This can be explained by the mechanism of competitive inhibition. The phytoestrogens (soy isoflavones) bind to the bodies estrogen receptors thus preventing (inhibiting) the binding of other more estrogenically active substances to these receptors, including the body’s own estrogen. Obviously not all the receptors will be bound by the phytoestrogens, but enough will bind to lower the high effect of stronger estrogens in the body, thus modulating or regulating the effect. The isoflavones may also reduce the effect of estrogen by stimulating production of SHBG (a substance that binds estrogen and makes it less potent).

There have been reports of babies fed soy milk formulas in Australia, New Zealand and Europe that have had excessive estrogenic effects. Some drastic symptoms have been reported such as girls starting menstruating, developing pubic hair and breasts from as young as five years old. Young boys developed female characteristics, and their male genitalia did not develop properly. It is unknown if the problem was solely due to the soya formulas they were given as babies, or if the above environmental issues played a role in their demise, but it would be better to avoid a potential problem if possible. Increased estrogen effects could be very damaging to your child physically and mentally, so PLEASE  AVOID feeding soya formulas to babies, children, puppies, kittens or any animal that is hand reared. If you are feeding an infant the same food every day of its life without variety (which is what happens when feeding an infant formula), then the undesirable effects of this sole source of food will invariably build up and can lead to accelerated problems. The only appropriate and “wholefood” for an infant is its own mothers milk which changes daily with the varied diet of the mother. It is unfortunate that some mothers are unable to breastfeed and some children have allergies to their mother’s milk and have to resort to bottle feeding.

The sad truth is that many soy products have been genetically modified or sprayed with toxic chemicals or contain unhealthy additives or preservatives. It is important to know your source when buying any consumable these days. Always read labels, and if the information is not available, begin to insist on it at your local supermarket. Public opinions are very potent motivators for the consumer driven market.

It is important to be aware and to be fully informed and then you are able to make your own discretional decision whether to include soya in your diet or not.
As usual it is for me the old adage that wins the day…

Variety is the spice of life and

Here’s to a varied, healthy and exciting life for you all.