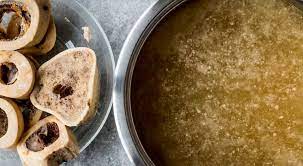 No Bones About it -

Should I give my dog bone broth?

by Plear Littlefield ﻿ www.therawfeedingcommunity.com﻿
Very interesting website with lots on raw and alternative feeding which is unbiased with research and well worth a visit.
Note: this article is a long read, but if you scroll to the very end, there is a quick summary explaining which dogs would benefit the most from bone broth!
Bone broth for dogs has been gaining popularity lately, following claims that it is a nutrient dense “superfood” that can help improve your dog’s immune system and joint health, among other things. Let’s take a more in depth look into some of these claims and analyze the potential benefits that bone broth may provide for our dogs

But first, what is it? The name is pretty self explanatory – it is a broth made with bones (although, technically, stock would be the correct term). Fill your pressure cooker with bones, water, and vinegar (or lemon juice). It is recommended to let it cook for anywhere from 8 hours to 24 hours or even a couple days. Ta-da, you have bone broth! Many people then freeze the broth into ice cube trays for more convenient daily feeding.

Why should you make bone broth for your dog? There are plenty of articles that speak of the wonders of bone broth, claiming that it is packed with tons of vitamins and minerals, it does wonders for joint health, and it can even help “detox” your dog’s liver! But is this all true, or is bone broth just the newest “miracle cure-all” fad?
Before you dive in and make your whole house stink of bone broth, let’s do some fact checking.

This is one of the most common reasons why bone broth is recommended. It is said that the vinegar “leeches” the nutrients from the bones while the broth is cooked, resulting in a broth packed with mangesium, phosphorus, sodium, potassium, and especially calcium. On the surface, this makes sense, because any raw feeder knows that bone is a great source of calcium.

But unfortunately, a nutrient analysis of bone broth shows that this isn’t the case [source]. In the nutrient analysis linked in the previous source, they even used white vinegar, which is more acidic than the typically recommended apple cider vinegar. So why didn’t the vinegar leech the nutrients out of the bones as expected? To explain why this might be happening, let’s take a trip back to our high school chemistry class.

Remember the periodic table? Calcium, magnesium, sodium, potassium… these are all chemical elements. These elements are all cations or anions, meaning they all have an ionic charge, which allows them to form or break chemical bonds with other elements or compounds. This is called a chemical reaction. When you make bone broth, these chemical reactions are happening inside your pressure cooker.

Claiming that the acidic vinegar will leech the calcium and other minerals into the water is overly simplistic. In theory, it could happen, but in practice, it doesn’t – and it can probably be explained by the chemical composition of bone itself. Bone is composed of a compound called hydroxyapatite with a couple different ions that really like to form compounds with each other – think of them like magnets that are attracted to each other. There are only so many of these individual ions that can remain in the solution before they start to react with others to form different compounds. The compounds that are most likely forming aren’t soluable enough to dissolve in the broth. For that reason, many of these compounds will not remain suspended in the liquid – most of them will form a solid precipitate at the bottom of the solution [source].

​In other words, there is a limit to the amount of minerals that remain suspended in the liquid, and any minerals beyond that limit will instead be in the leftover bone sediment at the bottom of the broth. As a result, not only is the bone broth liquid not nutrient dense, but it turns out it is actually a very poor source of nutrients.
In the case of calcium, you might actually end up with less calcium in the bone broth liquid than were in the water that you started with [source]. This means that there might actually be more calcium in a glass of well water than a glass of bone broth! The only minerals that seem to remain in liquid bone broth at significant levels are potassium and sodium, and even then, other foods would be a much better source.
​
As for the sediment at the bottom: it will contain a decent source of minerals, but it still falls far short of raw bone.

Adding veggies to the bone broth or even just making broth with all veggies actually increases the amount of minerals that are able to remain in the broth, likely due to the more soluable chemical composition of plant matter in comparison to bone. So as it turns out, if you want a more mineral rich broth, you should make it with veggies instead! Or, if you want to add something to your dog’s diet that is mineral rich, supplementing with raw foods would be much better than bone broth.

Although bone broth might not contain very many minerals, it does contain a lot of protein! And naturally, most of that protein is collagen, the structural protein that connects and holds together an animal’s bones, tendons, ligaments, cartilage, and skin. This collagen is found in the gelatin that forms at the top of the bone broth. Gelatin is a very good source of collagen [source].

Collagen, like all protein, is made of amino acids. Amino acids are incredibly important; they play a part in virtually all cellular processes within the body. Ten amino acids are considered essential for dogs [source], meaning that must obtain them from their diet. The rest of the amino acids can be synthesized by the body, so they are considered non-essential and aren’t required to be obtained by the diet.

When a protein is digested – regardless of what kind of protein it is – it is broken down into these amino acids, which are then used by the body wherever they are needed most at the time of digestion. So, technically, it isn’t as simple as “eat collagen, improve joint health” just because collagen is involved in the structure of joints. Similar to how consuming fat in the diet doesn’t directly translate to fat in the body – it is a bit more complex than that 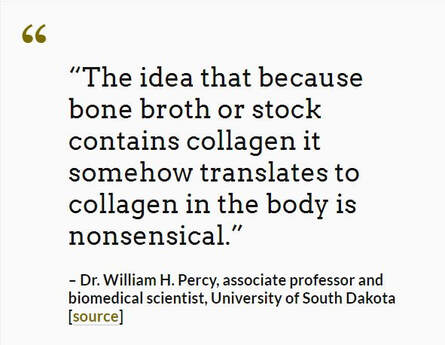 Studies show that supplementing the diet with collagen may help improve symptoms in dogs with arthritis [source, source]. Gelatin could have the same benefits due to its high glycine content [source]. Glycine is not considered an essential amino acid, but a couple studies have shown that the amount of glycine able to be synthesized by the body may not be enough to satisfy all metabolic processes alone, suggesting that more glycine must be obtained from the diet [source]. One of the metabolic processes that would benefit from more dietary glycine is collagen synthesis.

Bone broth isn’t the only source of glycine, of course; pork, lamb, and beef are also very high in this amino acid. But gelatin is one of the best sources of glycine [source]. 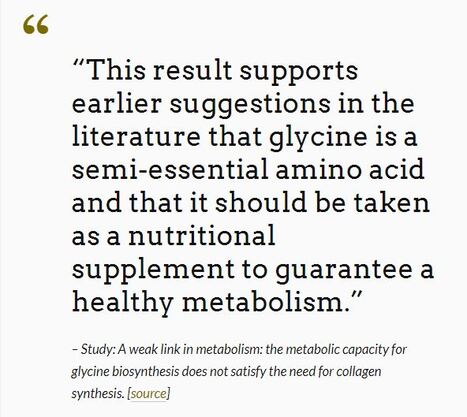 But remember, we’re talking about the gelatin in bone broth here, not just the liquid. There isn’t much evidence suggesting that liquid bone broth has the same benefits.

Worth noting: raw fed dogs that get enough red meat in their diet are already consuming far more dietary glycine than kibble fed dogs, so it probably isn’t completely necessary to give bone broth to a raw fed dog – but, of course, it won’t hurt either. Kibble fed dogs, on the other hand, would benefit even more from the extra amino acids that may be lacking in their diet, because heat processing denatures many of these amino acids (and bone broth would add more dietary moisture, too, which is an extra plus for kibble fed dogs).

Well, first of all, one of the liver’s main functions is to detoxify chemicals and metabolize drugs in the body. If your dog’s liver isn’t doing that already, it isn’t functioning correctly, and that is a serious health condition that bone broth, or any other supplement or diet claiming to “detox” your dog’s body, can’t fix [source]. Improper liver function is something to discuss with your vet. If your dog’s liver is working correctly, then it doesn’t need to be “detoxed” – it is literally already doing that itself.

While some studies have shown that the amino acid glycine found in bone broth may help improve liver function [source, source], it could also be potentially dangerous to give bone broth to a dog with liver disease.

Keep in mind that the studies linked as sources are using a glycine supplement, not bone broth itself. Furthermore, also keep in mind that many of the studies researching the benefits of collagen are also not using bone broth – they are using a hydrolyzed collagen supplement. Hydrolyzed collagen is much easier to digest than gelatin because the amino acid bonds are already broken down. With bone broth gelatin, the liver would still have to break down the collagen proteins in order to utilize the amino acids. 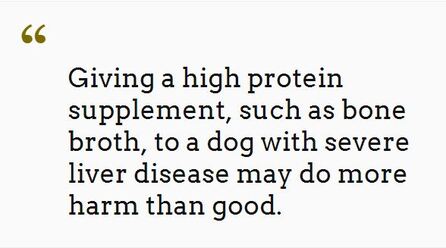 A diseased liver may not be able to properly break down those extra proteins, putting more strain on the liver. It then may not be able to get rid of waste products, resulting in a build up of ammonia in the bloodstream. This can cause severe health complications in the central nervous system, eventually resulting in hepatic encephalopathy: the loss of brain function due to the build up of toxins in the blood and brain.

Of course, that is an extreme example of what could happen in a very severe situation. But the point you should take away from this is that there aren’t very many studies proving many of these claims about bone broth specifically. Just because an amino acid that can be found in bone broth has certain benefits, doesn’t mean that directly translates to bone broth having those benefits. In many cases, it is not that simple. For this reason, I would recommend speaking to your vet before giving your dog bone broth if he has liver disease.

Of course, that is an extreme example of what could happen in a very severe situation. But the point you should take away from this is that there aren’t very many studies proving many of these claims about bone broth specifically. Just because an amino acid that can be found in bone broth has certain benefits, doesn’t mean that directly translates to bone broth having those benefits. In many cases, it is not that simple. For this reason, I would recommend speaking to your vet before giving your dog bone broth if he has liver disease.

Bone broth does have its uses, and there is evidence to support the idea that it could be beneficial. However, keep in mind that if something sounds too good to be true, it probably is. Many of the claims about bone broth are exaggerated or oversimplified half-truths.

When you weigh the risks vs. benefits, bone broth comes with very little risk, and the potential to be beneficial. For that reason, bone broth would be a good choice to add to your dog’s diet – but don’t rely on it alone to solve your dog’s health issues.

So to answer the question,

Should I feed my dog bone broth?
​
The dogs that could benefit the most from bone broth are…


Dogs with joint issues or skeletal injuries
Picky, sick, or dehydrated dogs, and/or dogs with a suppressed appetite
When should you NOT feed bone broth?
​
Dogs with severe liver disease
​​