​Should an aggressive dog be surrendered to a shelter? 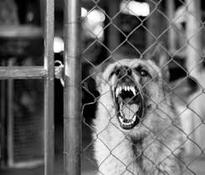 We featured an article ​the other day entitled, IS EUTHANASIA EVER AN OPTION FOR BEHAVIOUR PROBLEMS?. ​ It explored how ​difficult​ it is for an owner to consider this option. However ​where dangerous  dog​s are concerned,  and all ​options have been explored and exhausted, it ​is often  the right thing to do, ​for both the dog, and in the interest of  responsible pet ownership.

Unfortunately, not everybody has the courage to euthanize their dangerous dog, and the alternative is often that the dog is surrendered to a ​"​no kill​"​ shelter. A common factor with a dangerous dog, is that it will be mostly isolated from people and other dogs, due to ​potential  dangerous behaviour. ​ This becomes a double edged sword in that ​stress ​and aggression ​levels escalate, ​and evolve into other types of behaviours, such as obsessive pacing, acral licking, turning and spinning in circles, pacing, barking, bouncing off the sides  this poor dog ends up in a no-win situation and the probability of escalation in reactivity and agression increases tenfold.​

​At ​a shelter I visited ​in 2017, I came across a dog that could not be re-homed, and whom had been at the shelter for a ​number of  years, exhibiting extreme obsessive behaviour. I asked the lady in charge ​ whether she had an opinion on euthani​s​ing ​this poor animal? I was told that “it was a No Kill shelter, and not the Christian way of doing things, and we should not try to act like God”. ​Upon reflection I ​cannot help but wonder how "christian" it is to allow a sentient being to spend its life like a prisoner in virtual solitary confinement - is this not a fate worse than death?  There is a difference between no kill and no suffer - especially for an older dog, or a dog that is used to being with its family, and this applies to any dog that is dumped at a shelter for some reason (death/personal circumstances), whether the dog is dangerous or not.

An additional factor to consider, is the cost of keeping a dog that cannot be rehabilitated for whatever reasons, is that this dog is taking up space for dogs that can be re-homed.

It is my own personal belief that shelters should have Intake Criteria, as well as an Assessment Process, and that if a dog that was dangerously aggressive was surrendered for adoption, that the shelter in question, should ​not take it.  Instead the shelter should request the owner to discuss euthanasia with their vet.  Shelters, out of the goodness of their hearts, often take the responsibility away from owners, and end up with the problem themselves, and at the end of the day, it is the dog that suffers. ​This is not even considering the fact that the shelter staff and other dogs are put at risk if they should be exposed to a dog like this.​

Other unfortunate alternatives, that tend to happen with seriously aggressive dogs are: -
The result of this? A dangerous dog has become somebody else’s problem and the chances of ‘accidents’ happening in that a gate is left open, somebody comes onto the property unexpectedly, is high and not at all uncommon. All that has really happened here, is that the owner does not feel as guilty, as they have managed to find a home for the dog – I wonder what they would say to the person that the dog bites, very often with serious consequences, and heaven forbid a child? On occasion, a dog such as this is kept locked in the backyard. Again, accidents all too often happen, and the dogs stress levels increase, and then the inevitable 'accident' happens and the dog bites again. The solutions are short sighted and fail to help the dog in any meaningful manner. ​
What changes a dog from this to this?  inevitably, in some shape or form, a human is normally involved
Why do dogs become dangerous?

In my experience, it is rare to come across a dog that is born aggressive. Some of the common causes for aggression could be a genetic component, the result of bad and irresponsible breeding, as is often seen with the fighting breeds or there could be a neurological component at play.

Perhaps the owner has practiced the old-fashioned training methods where physical punishment was undertaken, and the dog has become fearful of people. The one thing that you can guarantee with aggression, is that the more it is exhibited, and the dog finds that the behaviour works, the more the dog will engage in the behaviour.

However, from a behaviour point of view, the most common reasons that I come across for serious aggression, stem from the following reasons: -
Can dangerous aggression be avoided?


The only way we can really make a difference, is to share our knowledge and make people more aware, and by working together for a common cause - the betterment of dog’s lives.  So, if this article resonates with you, please do share it.