​
by Sarah Hansen - www.labradortraininghq.com - Great site do have a look 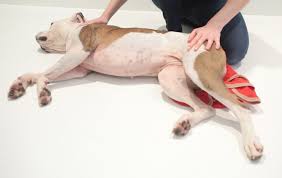 There’s nothing more terrifying than seeing your dog hurt. However, even after the danger has passed, there is another silent killer that dog owners often don’t recognize in the beginning stages.

After the trauma, it's often the shock that kills. What's even worse is that unless you know what to
look for.

Urgent medical care is required when your pup goes into shock, and recognizing the early warning symptoms will give you precious extra seconds to get your dog to a vet.
The term “shock” is often used incorrectly. It’s more than just the uncomfortable feeling after an accident.

Shock is actually a medical term for a loss of circulation. This means that your dog’s blood pressure becomes critically low and the brain and other vital organs aren’t getting enough blood.

Dogs go into shock for many reasons. Commonly it’s from some type of body trauma or blood loss due to a car accident or getting bitten by another animal.
However, shock can also be caused by heart failure, anaphylactic shock due to severe allergic reactions to insect stings or food, septic shock from infections and neurogenic shock from damage to the nervous system.

Dogs can also go into shock from excessive fluid loss due to vomiting and diarrhea, or airway obstructions caused by choking or an illness like pneumonia.
However, no matter what the underlying cause may be, it’s important to remember that any shock is a life-threatening emergency requiring veterinary intervention.

How to Recognize the Symptoms of a Dog in Shock

​It’s important to understand the three main stages of shock in dogs so you can recognize what’s happening and get your dog to a vet before it progresses.

Here are some early warning signs your dog may be going into shock.
Middle Stages
Once your dog progresses further into shock, you will notice these symptoms develop. Late Stages

The final stages of shock before your dog goes unconscious will usually manifest in the following ways.
Get Your Dog to a Vet ASAP

​I can’t emphasize enough how important it is to take your dog to a vet at the first signs of shock. This is not the time to wait and see if they come out of it on their own.