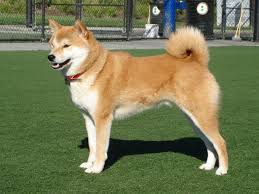 The exact origin of this breed is not known, and it is thought that it originated in Japan around 300B.C , in the mountainous terrain, and would have been used for the hunting of small game, and even wild boar.  In general it is a very hardy breed.

In looks, this breed is very similar to the Akita, just smaller in size. It is the smallest of the 6 original spitz breeds from Japan.

The first Shiba dogs entered the United States in the 1950s, and was recognized by the AKC in 1993.
​Is this the right dog for you?

This breed does best with a more experienced owner as due to what it was bred for it does tend to try to be domineering and wants its own way. Best training methods are positive reinforcement and rather than one long session, do smaller sessions during the day, which seems to work best for this breed.

Some of the breed tend to be barkers, so teaching the Bark & Shush as a pup can go a long way to preventing excessive barking.

This breed also tends to be shy with strangers, so socializing as a pup is essential, and on going socializing will help to keep the social skills in place. The Sheba is also territorial, and makes a good watchdog.

It is a working dog, so a quick walk around the block is just not going to be enough for this dog. Dogs that do not receive the physical and mental stimulation they need tend to become bored and frustrated, resulting in various behaviour concerns such as excessive barking, digging and chewing.

hardy breed is always on the look out for adventure and may tend to be domineering and headstrong. It is fairly vocal and some even bark a lot. It is alert, shy with strangers, and territorial and is thus an excellent watchdog. The self-confident Shiba is a bold, headstrong, and independent dog. As long as it is given daily exercise, it is active outdoors and calm indoors. It tends to chase small animals and may be scrappy with unknown dogs of the same sex. 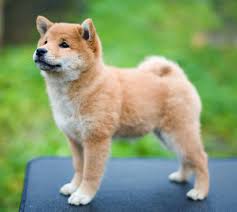 On average, if well bred this breed will get on with others of its own breed, but do make sure that the existing dog  has been well socialized so that it will accept another dog into the home.

When it comes to which sex get on better, your best bet is one male and one female (both sterilized. Never two females. The vast majority of the time two females will get on well until about 8 - 9 months of age and then fighting for position tends to occur. When males have the odd altercation, it tends to be over quickly, but with females, it just intensifies and often the only solution is for one of the females to be re-homed. This is not just for this breed, but in general. Itw is said that with this breed they can be reactive to same sex dogs, so as a safeguard, if you are going to have two - one of each sex is your best option.

​Historically, the Shiba was often known to be aggressive towards other dogs, especially of the same sex. However, better breeding has now produced a dog where these tendencies are much improved, however, if provoked or challenged, it will react.  As a safeguard, always take you pup to puppy socializing and with this breed, don't just stop there - continue the socialization - this makes for a solid social foundation.
Do they get on with other animals?

They can do if introduced as a puppy, however this dog is bred to hunt small animals, and may take off after the cat next door, or any other small animals it encounters.
​Are they good with children?

Even though this dog can be a bit otherwise at times, it really does make a good family pet and is good and protective towards its family and children in the family. However, all children should be taught how to approach and interact with children, especially with this breed, as if treated roughly it may show its displeasure.

The dog should be socialized with people and children from being a pup and this should be ongoing.
Health

Overall, this is a very hardly little dog, and when health problems are experienced, considtions such as allergies, cataracts, patellar luxation, HD, and PRA are what may occur.