Salmonella : - as we feature many articles on raw food, and Salmonella is often associated with same, although handling raw dog food is no more dangerous than handling your own raw meat in the home - standard safety precautions should always be taken - we thought it would be a good idea to supply you with the Salmonella Poisoning Symptoms.
Salmonella Food Poisoning (Salmonellosis

www.medicinenet.com
​(By the way, this website has a wealth of information in it on all the various human medical conditions- enjoy) 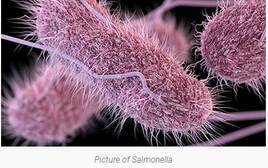 Is Salmonella Contagious?Many of the members of the bacterial genus Salmonella are contagious. The organisms can be transferred from person to person, by both direct (via saliva, fecal/oral spread, kissing) and indirect contact (for example, using contaminated eating utensils). In addition, a number of Salmonella species can be transmitted from animals (snakes, turtles, chickens, hamsters, cats, and dogs) to humans, usually by direct contact.
Learn more about Salmonella infections »

What is Salmonella food poisoning?

Salmonella infection, or salmonellosis, is another name for Salmonella food poisoning. Salmonella are a type of bacteria known to cause food-borne illness for over 125 years. The organism is named for a scientist named Daniel Elmer Salmon, who discovered the bacteria. Salmonellosis is a food-borne infection typically caused by consumption of contaminated foods. Salmonella causes an estimated 1 million food-borne illnesses every year in the U.S. and about 19,000 hospitalizations.

Different types (called serotypes or serovars) of the Salmonella bacteria can cause the illness. The two most common serotypes in the U.S. are S. typhimurium and S. enteritidis. Specific strains of the bacteria can be responsible for outbreaks of the disease. For example, an outbreak in 2013-2014 was linked to multidrug-resistant serotype Salmonella Heidelberg. This strain and some other strains have become resistant to many drugs traditionally used to treat the infection, posing a risk to public health.

Some types of Salmonella bacteria (S. typhi) cause typhoid fever, a serious illness that occurs most often in nonindustrialized areas of the world.

What are symptoms and signs of Salmonella poisoning?

Salmonella illness causes an inflammation of the gastrointestinal tract; this is known as gastroenteritis. The symptoms usually go away on their own after four to seven days.

What causes (eggs, chicken) Salmonella outbreaks? How does Salmonella spread?

Poultry, beef, milk, and eggs may contain Salmonella bacteria, since the bacteria live in the intestines of humans and animals. Thorough cooking of these foods destroys the bacteria.
Foods, including vegetables and fruits, may also be contaminated during handling or processing of the food, and this is another common source of outbreaks. For example, food may be contaminated by the feces of infected people or animals or from the unwashed hands of a person handling or preparing the food.

Small rodents such as hamsters, as well as baby chicks and ducklings, may also carry the bacteria, and contamination of food after handling these animals may also result in salmonellosis. Reptiles may also harbor Salmonella bacteria. In the 1970s, outbreaks were associated with baby turtles kept as pets. Further, the infection may be spread by contaminated surfaces (such as cutting boards) that have had contact with contaminated foods.

Contaminated foods usually look and smell normal. Over the past years, outbreaks of salmonellosis have been associated with a number of different foods, including chicken, cucumbers, alfalfa sprouts, bean sprouts, ground beef, mangoes, peanut butter, and cantaloupe. These are just a few examples. An outbreak in February 2016 caused by the strain Salmonella muenchen was linked to contaminated alfalfa sprouts. In 2017, an outbreak was linked to papayas from Mexico. A breakfast cereal known as Honey Smacks caused an outbreak in 2018.

What are risk factors for Salmonella food poisoning?

Since foods contaminated with Salmonella are not obvious, anyone may consume contaminated foods. Owning pets such as small rodents, chicks, ducklings, small turtles and some other reptiles, and some birds may increase the risk of coming in contact with Salmonella bacteria. People who are exposed to many people, such as those living in group housing, may have an increased risk. Young children (under 5 years of age) have the highest reported incidence of infection.
​
People with medical conditions that lead to immune suppression are at risk for a more severe illness when they do become infected.