An Overview of the Rottweiler 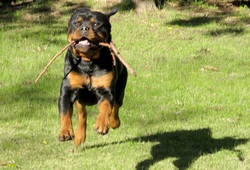 Personality:  A typical Rottweiler can be described as large, powerfully built and courageous. They have steady but strong personalities and are best suited to an owner capable of handling and training large dogs. They are very predictable and adapt easily to a sensible household, provided they are socialized from day one with visitors, relatives, friends and their children. Puppy socializing from an early stage is a must..

For whom is the Rottweiler meant?:Rottweilers fit in best with a family who will allow it to share their living space with them and who are prepared to let them undergo early socializing and training. It is not an ideal pet for the very elderly, or for infirm people. People with small children can safely raise a Rottweiler pup in their household, provided play and interaction happens under adult supervision (as with any other breed.) It is a guard dog without peer and of all breeds can be rated as better than average. It is, however, not meant for just anyone.

Who do I buy from?:Always make enquiries for puppies with a KUSA registered Rottweiler Club, whose Secretary or Breed Sub-committee will point you to responsible breeders. Responsible breeders are those who match their dogs against other dogs of quality in the Show ring, where they are handled by a multitude of judges, who even examine their dentition. A dog that tolerates that in its owner’s presence, will be a safe dog to breed from, or to take to the Vet. Remember that it should never be a test for the Vet (or Judge’s) courage.

Which other breeds will it get along with?:Rottweilers will get along with dogs of ANY medium to large breed, provided it’s of the opposite sex. Don’t attempt to keep a male (or a bitch) with a same-sex dog. This is not a ‘Rottweiler phenomena’    -   it is true of most working breeds.

Is it wise to keep same-sex dogs?:To keep two or more same-sex dogs of a rather dominant breed together, is often a recipe for conflict. They can get along fine, until they are ‘triggered’ by a ball or a bone lying on the lawn, when both might want to take possession of it, or by someone delivering mail and when they rush for the gate and can’t get to the ‘intruder’, they go for one another. That is very unlikely to happen with dogs of the opposite sex.

How do they get along with other animals?:If you start early (during the puppy’s imprint stage), you could raise a puppy with e.g. a turkey, and the turkey will be safe. But, if it sees its first turkey at they age of three years, you’ll just see feathers fly! This is a ‘dog’ thing, and not just a ‘Rottweiler’ thing. By starting early socializing, I’ve raised three Rottweilers with the same cat.

Training Requirements:Start training early, while the pup is still pliable and you don’t have to pit your strength against it. Rottweilers are tractable and intelligent and learn quickly. Choose your training group carefully, so you don’t end up with a group who uses harsh methods for training. Formal training is best started after puppy socializing, from the age of five to six months.

Health Concerns:Rottweilers are basically healthy dogs, but it would be wise to only buy from breeders who are registered with the Kennel Union of Southern Africa and belong to one of the eight Rottweiler Clubs in the country. That means that they need to breed with parent dogs that are structurally sound (certified and X-rayed to be within the acceptable requirements for breeding), else their offspring will not be eligible for registration. In the eighties Rottweilers often succumbed to Parvovirus and Corona virus, but since breeders have been inoculating meticulously, deaths as a result of these infections have largely disappeared.
​
“In today’s age, with the rising cost of veterinary care, it really is a wise decision to consider medical insurance for your pets. Depending on the plan you choose, you can ensure that if your pet does develop one of the health issues the breed is prone too, that you will be covered –additionally, just knowing that any accident your pet may have will be covered, will out-weigh the monthly insurance fee for most pet owners. Our own personal choice is Genricpet as they have a ‘no limit’ policy and their rates are comparable to the rest of the industry. To find out the questions and things to look for in a Medical Insurance, please just follow this link”


Life Expectancy:Rottweilers can live to about ten years on average, but quality of life, good food and regular outings and exercise can prolong its life significantly. It should never be allowed to be overweight, even in old age. It is not too uncommon for some to reach fourteen or even fifteen years.

Some Do’s and Dont’s for Rottweilers:

1)       Do not engage in guard and defense training, unless you do so with an experienced instructor who utilizes hunting drive rather than aggression.

5)       Develop a feeding routine; don’t allow it to have access to food all the time.

6)       Expose it to the outside world and take it for drives and walks often.

7)       There is no need to breed with your Rottweiler, unless you are a competitive show-person who also works your dogs. Occasional breeding is best left with experts of the breed and is not meant to fill the world with puppies.

Short Historic Summary: The Rottweiler is an ancient breed. It is said to be of German origin, but it was most probably brought to the shores of Rome by the Phoenicians, who also introduced other Molossus (Mastiff) breeds to Europe. A very likely ancestor of the Rottweiler is the huge Tibetan Mastiff, a large, long-coated dog who equals the Rottweiler in colouring. These dogs were adopted by the Romans as war dogs, driving beef on the hoof during their campaigns, guarding prisoners of war etc. After the Romans invaded Europe through the St. Gottards and St. Bernard passes in the Alps, they spent some two hundred years in the Bavaria and Swabia areas of Germany. When they were eventually expelled by the Germanic tribes, they blended these Roman camp dogs with (amongst others) the now extinct ‘Hatsruden’, a boar hunting dog, and with Teutonic thoroughness developed the Rottweiler to what it is today. One of the centres of occupation by the Roman armies was the town of Rottweil, to which the Rottweiler owes its name. 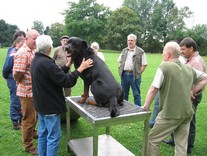