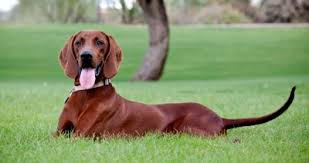 This breed came from the Southern part of USA, especially around Tennessee and Georgia. It is believed that around the 18th centuary, several European hunting breeds were imported to US and used primarily for hunting smaller game. A dog was needed to hunt for larger games, such as porcupines, racoon, coons, cougars, bears etc, and further breeding took place with the Foxhound, Bloohound and possibly Irish hound, to produce the breed as it is today. It was first recognized by the AKC in 2009.

One may well wonder about the origin of this dogs name! It is believed that this either originated in one of two ways - On of the earliest breeders who helped to create the breed as known today, was a gentleman called Peter Redbone, and it is widely believed that the name originated here. The other theory is that it got its name from the deep and rich Reddish colour of the coat and widely used for hunting Coons.

The popularity was increased by the development of a competition called the Coonhound Trails which were started in the 1800's and continue today, to see which team of hunter and dog can capture the greatest number of racoons.

The popularity of this dog has increased and it is used as a scenthound and also a treeing dog. Treeing dogs are those that chase and force an animal up a tree - the dog will then stand and bark continually until the hunter comes close enough to be able to take a shot of the animal up the tree.

In the home environment, this breed is known to be more laid back than other coonhounds, and makes a good family pet, but is better suited to life in a rural area where it can use its natural tendencies. They are good with people overall, and owners often describe them as being natural clowns and say they love the reaction they get when they act like this. The breeding and standardization of the Redbone Coonhound was greatly furthered with the development of Coonhound Trials.  These trials began during the 1800’s and continue to this day.  These trials are organized competitions to see which handler and his dogs can capture the greatest number of raccoons.
​Is this the right dog for you?

This is really a working dog and as above, would do better in a rural area where it would be able to roam with owner and hunt, even of its own accord. It is very loyal to its owners and friendly to owners. It does need at least an hours daily exercise and they need to use their noses as what was born for. To stimulate this aspect, as many walks in rural areas as possible and in the home environment, you can also stimulate the need to scent with scent games and trails and behaviour games that stimulate this sense as well.

This is not a high-strung, fussy or clingy breed and adapt beautifully in new situations, but do not do well being left alone and unattended periods of time. Due to this, do incorporate Alone Time Training when a pup and keep going, and ensure you leave lots of mental stimulation around the garden or home when the dog is alone. If not, the odds are that destructive behaviour will occur due to boredom and frustration, and excessive barking could also occur.

As the barking is part of what it is bred for, this can become excessive, and prevention by way of having a dog that will silence on cue is a good idea. Bring in the Bark & Shush' exercise when a puppy and keep this skill in place. It does tend to bay when on the hunt as well. They are great watchdogs and the bark can sound intimidating, however, they are not guard dogs.
​ 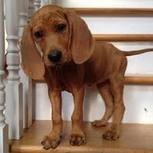 
On average the Redbone Coonhound does not tend to be aggressive to other dogs, and actually gets on well with them,  however you must make sure that your dog has been well socialized so that it will accept another dog into the home.

​On average they tend to be a friendly breed getting on well with other dogs as hunting in a pack was part of what they were bred for. It is always important to ensure you get from a good breeder and early socialization as a pup and ongoing, will help to cement good social skills.
Do they get on with other animals?

These dogs do have a very high prey drive, and although if socialized to cats as a pup can get on with them, they are very likely to give chase and drive the cat up a tree. Not recommended for other small animals.

The breed in general is known to be good with children and makes a good family dog, however as it does mature slower than most breeds, does tend to keep its puppy bouncy tendencies for longer and may knock down young children.

The most common problem found in this overall healthy breed is that of HD (hip dysplasia) and a tendency to overeat. Other problems can be some eye issues, such as Cherry eye, glaucoma, entropion and cataracts. They can also be prone to ear infections and hypothyroidism.