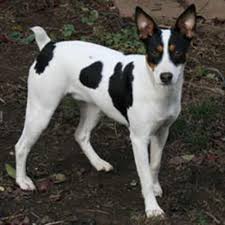 No surprise here as to what this little one was bred to do!

It is believed that the Rat Terrier is a variety of other breeds such as Smooth Fox Terrier, with crosses with Min. Pinscher, Chichuahua, Greyhound and possible even Greyhound. This breed is American in origin and was the most common breed to be found on farms, to keep mice, rats and other small creatures under control. It does come in two sizes, small and medium.

It is said that it was President Theodore Roosevelt who gave this dog its name after it had eradicated the rat infestation at the White House - hard nowadays to think of the White House having rats!

This is an intelligent, friendly and fun loving little dog makes for a dog family dog as long as sufficiently exercised.

This lovely little dog, is a good fit for many homes, as long as he receives the exercise needed and is kept mentally stimulated. Not to give him what is needed can lead to him being bored and frustrated and causing havoc and destruction, and excessive barking in the home. It is said that although he is of the Terrier breed, the Rat Terrier tends to be quieter than the Jack Russel & Parson Terriers and more likely to spend time quietly lying with its people.

He does well in a home where people are around a lot of the time and does not always cope when left alone. It is a good idea to train Alone Time training and keep in place to avoid separation anxiety.

He also tends to be a barker when he wants attention, so teaching Bark & Shush when a pup will go a long way to controlling the barking.

Being a Terrier there is always the digging aspect to take into consideration, especially if bored/frustrated or left alone, so a good idea is to build a Digging Pit and keep it fully stocked. 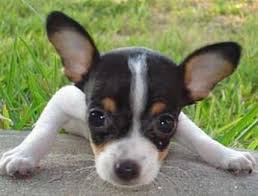 
On average the Rat Terrier does not tend to be aggressive to other dogs, however you must make sure that your dog has been well socialized so that it will accept another dog into the home.

They do tend to be possessive of toys and valued objects, so early training to prevent resource guarding should be undertaken,

If bred well is normally friendly to other dogs and early and continued socialization will keep the social skills in place. However, as with all Terriers, the breed is tenacious and if challenged, will not back down.
Do they get on with other animals?

They are bred to chase small animals and have a high prey drive, so do not always do well with smaller animals, tending to chase them. Early socialization can help with this, however, if the other animal does run, the innate behaviour may kick in, and the Rat Terrier will give chase.
​Are they good with children?

Overall they are very good with children, however older children are better as, especially when young, they do tend to be very bouncy and boisterous.
Health

Overall, this breed tends to be healthy, although they do tend to have teeth that seem to be too big for their mouths and dental problems can occur. Some problems that can be encounterd are PRA (progressive retinal atrophy) and lens luxation. They can be prone to both luxating patela. They can also suffer from both epilepsy, hernia's and heart disease. The skin can be a problem, as some of them are prone to allergies.
​
“In today’s age, with the rising cost of veterinary care, it really is a wise decision to consider medical insurance for your pets. Depending on the plan you choose, you can ensure that if your pet does develop one of the health issues the breed is prone too, that you will be covered –additionally, just knowing that any accident your pet may have will be covered, will out-weigh the monthly insurance fee for most pet owners. Our own personal choice is Genricpet as they have a ‘no limit’ policy and their rates are comparable to the rest of the industry. To find out the questions and things to look for in a Medical Insurance, please just follow this link”
Do’s and Dont’s