GENRIC Pet Insurance is the most innovative pet insurance product (not a pet medical aid) in SA. It is designed to cover the unexpected, unforeseen, and fortuitous veterinary costs that cats and dogs kept as household pets may incur as a result of illness or injury. Its development took cognisance of the strengths and weaknesses of other policies and therefore avoids their shortcomings from day one. Vet expenses can be very high, especially if any type of operation or specialist care is involved. www.genricpet.co.za
Pyometra - The biggest, most life-threatening reason why you want to spay and neuter
​ 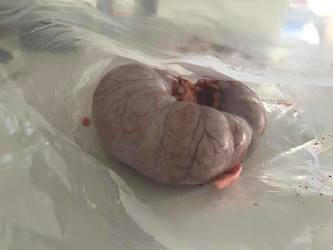 This is a uterus weighing 1kg that I have just removed out of a dog weighing 7kg- the uterus is filled with pus.
In a post from Blue Bush Animal Clinic last week, the 11th March, they spoke about how dangerous Pyometra can be, and we thought is would be a good idea to give you even more information on this killer disease.Here is an extract from their post and we have sourced more info on this topic in the article below.

"So having seen 4 cases of pyometra this week the last of which I have just finished operating on this Sunday afternoon I would like to try and educate on this condition. Pictured below is a uterus weighing 1kg that I have just removed out of a dog weighing 7kg- the uterus is filled with pus. This is equivalent to a 70kg human having 10litres of pus in her abdomen. The condition catches a lot of owners out that don’t want to add to overpopulation by breeding so they sterilize only the males or the only have intact female dogs that do not have contact with males, but female dogs need to be spayed for their own health as the risk of pyometra in older unspayed bitch that has never ( or only occasionally) had puppies is very high".
Pyometra: Why You Should Spay Sooner Than Later

Dr. Justine A. Lee, DVM, DACVECC
(This is a really good site, with articles from experts and designed to increase our knowledge)
Most veterinarians advocate spaying and neutering for several reasons: While these are all excellent reasons for spaying and neutering, as an emergency specialist, I have my own additional bias on why I want owners to do it. I’m a big advocate of spaying or neutering your pet early in life because at some point, you’ll likely end up doing it due to medical reasons… and often times, on an emergency basis (which is much more expensive!).

The biggest, most life-threatening reason why you want to spay and neuter? Pyometra.

Pyometra, which is a severe infection of the uterus, can be fatal to dogs and cats when untreated. In intact animals (those that aren’t spayed yet), the chronic effect of sex hormones can result in overstimulation of certain cells within the uterus called cystic endometrial hyperplasia (CEH). CEH can then progress in a severe E. coli infection and pus infection within the uterus. Typically, CEH occurs several weeks after a heat cycle, followed by a life-threatening pyometra shortly thereafter.

There are two types of pyometra infections: what we term “open” or “closed.” These terms refer to whether or not the cervix is open – in other words - draining out pus if it’s an “open” pyometra. If it’s a “closed” pyometra, it means you can’t actually see the pus drip out – all the pus is hidden away in the uterus instead. ​
“Open” pyometras are easier to diagnosis due to foul, malodorous, bloody green discharge from your pet’s vulva. “Closed” pyometras can be harder to diagnose, as the signs aren’t as obvious to pet owners. As a result, “closed” pyometras are more life-threatening as they are under-recognized. As pets often hide their signs until they are very severe, pet owners may not realize their pet has a life-threatening infection in their uterus. Without treatment (which is almost always surgically treated with an emergency ovariohysterectomy), the uterus can rupture, resulting in a severe bacterial infection in both the abdomen and in the blood stream.

So, if you have an intact female pet, make sure to keep any eye out for the following clinical signs (especially if it’s several weeks after your pet’s last heat cycle):

As a veterinarian, how do we diagnose a pyometra? The diagnosis is typically based on the following: Once diagnosed, treatment must be initiated immediately. While some textbooks will occasionally advocate medical management, I never recommend this – after all, the problem will just re-occur at the next heat cycle. Medical management includes giving medications that disrupt the hormone balance, temporarily resolving the problem. However, this typically can only be done with an “open” pyometra.

Ideally, surgical removal of the pus-filled uterus is necessary. In other words, an emergency, middle-of-the-night spay, which often can run you several thousands of dollars. While it might seem unfair to have to pay so much for an emergency spay, the procedure is much more complicated than a traditional ovariohysterectomy and the anesthetic risks are much higher. That’s because the uterus is much larger, more likely to rupture, and more difficult to remove. Finally, hospitalization post-operatively is longer as it typically requires aggressive IV fluids, intravenous antibiotics, pain medications, and monitoring (like blood pressure, blood sugar, and heart monitoring).

The cheaper option: spay before your pet’s first heat. Seriously. You’ll end up saving money in the long run, while minimizing the health risks to your pet. Help prevent accidental breedings, pet overpopulation, and medical problems all at the same time.
If you have any questions or concerns, you should always visit or call your veterinarian – they are your best resource to ensure the health and well-being of your pets.