YOUR PUPPIES TEETH - ALL YOU NEED TO KNOW


It’s good to know what to expect when you get a pup where their teeth and teeth health is concerned. If we bear in mind that teeth problems can have far-ranging consequences, apart from a foul doggy breath. Problems that can occur are dog having problems eating, plaque, tartar, infections, and in really bad cases can even affect the kidneys or heart.

We all know that pups are born without teeth, and they start coming in at about 3 to 4 weeks of age. These are called the puppy teeth, milk teeth or deciduous teeth. They consist of 28 temporary teeth, and the first to appear are the incisors – six on the top and six on the bottom. After this the canine teeth come in, and this consists of two on the top and two on the bottom. At about 6 weeks of age, the premolars will appear behind the canines. There should be 3 on the top and three of the bottom on each side of the mouth. You may well find that as the adult teeth are coming through, your pup may eat less and tend to chew more. However, is there is a drastic change in appetite, do check with your vet, as something else may be amiss.

We also know that these are as sharp as needles, and we will give you some tips on helping the teething process below.

As the adult teeth start to push through at about 8 weeks of age, the milk teeth will start to fall out and as they are pushed out of the way, you may find lots of little broken pieces of teeth around the home at this stage – it is totally normal, so don’t worry. On occasion there may be a little blood on the gum line due to the tooth having been forced out while the pup was chewing on something.

The sequence in which the adult teeth come through are the incisors normally come through at about 12 to 16 weeks of age, then the canine teeth at approximately 16 weeks, and finally the pre-molars at about 24 weeks. By about 6 months of age, your pup should have 42 teeth, which consist of 12 incisors, 4 canines, 16 premolars and 10 molars. As a matter of interest, humans should have 32 teeth.

What do you do if you find the adult teeth have come through, but there are still mild teeth in place?

This really is not an unusual situation and must be checked by the vet – on average if the milk teeth are still in place by the time the pup is sterilised at 6 months, they will be taken out at the same time.

Scotty tells of a Fox Terrier cross that adopted them many years ago, Scotty called him Scruffy, simply because he was – he was a stray, filthy dirty, and had hair sticking up in the strangest manner. She noticed that not only did he have a full set of adult teeth, he also had nearly a full set of milk teeth – she says he looked like Jaws! After establishing that previous owner could not be found, Scruffy was taken to the vet for vaccinations and a health check, and the vet said that he was in the region of 14 months of age – not only did Jaws have two set of teeth he had not been sterilised. The decision was made that as soon as he had settled down, both sterilisation and teeth removal would happen at the same time. 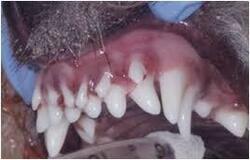 When milk teeth don’t fall out, they are called retained milk teeth. In a normal situation the roots of milk teeth are normally reabsorbed into the body, and as this occurs, it tends to loosen the teeth and they fall out easily. However, with retained baby teeth, the roots do not reabsorb, and the milk teeth fill the space where the adult tooth should be. The most common retained teeth in pups are the canines and incisors, however in Scruffy’s case, it looked like nearly all of them had been retained.

Leaving these retained teeth to fall out by themselves is not an option, as they can often cause problems such as misalignment, crowding, improper jaw development, the enamel can weaken, an improper bite develops, the dog may battle to eat, and can even lead to periodontal disease, as it is much easier for food and bacteria is more easily trapped. Her vet told her that infection can also occur – there was no doubt about it, Jaws was going to be Jaws no longer!

Scotty asked the vet if it was a genetic predisposition, and the vet replied in some cases yes, and that squashed face types (Brachycephalic dogs), and some of the small breeds such as Chihuahuas, Yorki’s, Miniature Poodles and Pomeranian's tended to more prone to it. He did say that this can happen in bigger breeds as well, but not as common due to their larger mouths.

How to help your puppy through the teething process

Chewing, chewing, chewing! However, ensure that it is Legal chewing, and don’t leave shoes, children’s toys, your computer bag etc around at the teething stage, as they be chewed! The pup is not being mean or spiteful, it is doing what it can to relieve the pain in its mouth – if you do find that your pup has chewed up your favourite pair of shoes, or your computer case – take a newspaper, roll it up as tightly as you can – then hit yourself over the head for leaving them where the pup could get them!

If you have a pup that has discovered that the wooden chair is wonderful to chew on, simply put on a few drops of pure Citronella oil. Dogs on average do not the smell of Citronella oil, and an added benefit, is that you will have less mosquitoes! However, do not forget to reapply.

It really is important to give good quality chew toys to a pup, as those little teeth are needle sharp and you don’t want pieces of a chew toys breaking off and being swallowed, and our favourite one’s are those of the Petstages range. They are durable, the right size for small mouths, and still soft enough for a pup to really get its teeth into. They also have multiple textures which help to massage sore gums.
​
We all know that putting ice on sore gums after having had tooth work or an extraction really helps, and for this reason another chew toy we love is one of the Petstages ones, that can be frozen and then given to the pup – just like a teething ring for babies that gets popped into the freezer. This toy has an added bonus, in that the outside gives relief to sore inflamed gums, and it also nice and crunchy.
​
For when your pup is outside in his playpen, or roaming around, consider filling a lunch box sized plastic container with water and freezing it. Once frozen, offer to your pup outside on the grass. He will have a great time licking this and it will help to sooth sore gums – however take away before it is so small that it can be chewed upon. ​
Some Chew Toys we do not Recommend

The sooner you get your pup used to having its teeth brushed the better, however it is often hard to either get a finger toothbrush or a full toothbrush into a pup’s mouth. Rather take a bit of the doggy toothpaste (never human), put some on your finger and rub along the teeth – mind your fingers however, those teeth are sharp! Doggy toothpaste normally has a flavour that pups enjoy (never having taste, we are just going on here say and a pup’s reactions!), and it is relatively easy to get the pup used to this manner. It is a good idea to constantly praise the pup while you are doing this, and every so often, stop and offer a treat while praising – not only is the taste rewarding, the pup is getting praised by its owner, and a treat of three to book – changes the pups perception of this exercise to a positive one.

if you find your fingers are taking punishment, then bunch up piece of clean cloth, apply some toothpaste, and rub this over the teeth.

Once the pup is used too, and happily accepting above, then move onto the finger toothbrush. We brush our teeth on average twice a day, and you should aim for at least once a day for your pup, and twice would be even better.  The more you look after your pups teeth, the more likely you will avoid the build up or tartar and plaque, and the possibility of future dental disease – not only will this be painful for your dog and result in other problems developing as we mentioned earlier on – it will also save you a fortune on future dental work, and your dog is less likely to have the dreaded ‘doggy breath’! We have supplied you with an article on Brushing Your Dog's Teeth at the bottom. 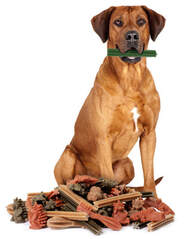 There is no doubt about it – dental chews for pups and dog can assist in avoiding tartar and plague from developing. Just be careful at what age you start to give dental chews – the suggested age is from 6 months of age, although nowadays there are dental chews sold specifically for puppies – rather check with your vet. We have supplied you with an article at the bottom in case you want to find out more about dental chews.  McMac, one of our wonderful sponsors has a good selection of top-quality dental chews that you may want to have a look at. https://www.mcmac.co.za/collections/chews-treats

On a personal note, we have found that feeding a top quality raw with the appropriate raw bones added in, goes a long way to having a dog with beautiful white teeth, and really avoids future teeth problems. The reasoning for this is that raw meat contains enzymes that break down food material, as well as the appropriate bones being given, that act as an effective abrasive to keep tartar off your dog’s teeth.

Additionally, when giving treats, look to the more natural one rather than processed ones – your pup will also love these!

There is a lot of controversy over whether kibble helps to keep a dogs teeth clean, and unless the dog is on a food aimed at dental health, it seems that kibble does nothing for our dogs teeth, and may actually increase the chances of dental problems, especially if you are using kibble only, for tooth health.

The reason for this is that dry food has a higher starch content than other food forms, and as there is no type of abrasive in kibble, such as bones, and the kibble tends to get trapped between teeth and causes the formation of future tartar. It seems that after about 10 days, the soft material actually hardens and becomes what we know as tartar. If you do decide on using kibble, then ensure that you are also offering the appropriate bones under supervision, and especially Dental Treats which actually assist with build up of tartar, and of course daily, or twice a day teeth brushing should also be done. Also, buy the very best food you can afford - it may cost a bit more, but will help reduce future vet bills.