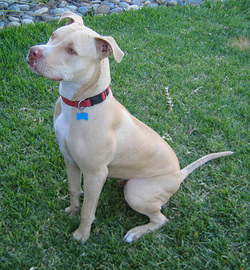 It is a well known fact that the Pit Bull breed was bred for blood sports such as bull baiting, bear baiting and dog fighting.  What is not generally known is that in the days of organized dog fighting, the dog handlers were in the pit with their dogs while they fought. They had to pick up and separate the dogs while in full fight. Before a fight, the handlers had to wash each other's dogs. After the fight, the badly injured dogs were often treated at ringside by strangers. Any dog that attacked or bit a handler (even if it was the other dog's handler) or anyone else at any time was culled, often on the spot, and would never have been bred.[1] This little bit of history perhaps explains why the pitbull makes a loyal, affectionate family pet but can in certain instances display aggression toward other dogs or animals. . Pit Bull Terrier, during the lifetime of the breed, has been used not only for fights with animals, but also for protection, hunting and as a shepherd. A pit bull is therefore a versatile dog. So is this controversial breed the right dog for you?

This is a breed that loves people, and has a reputation for being wonderful with children, tolerating their rough play. They are affectionate, loving companions that love to participate in activities with their families, be it a car ride or a walk in the park. Pit Bulls are often described as clowns and have a knack of making you laugh. The Pit Bull is not a guard dog for property as they need to be with their humans but should the need ever arise they will not think twice about sacrificing their life to save yours. An environment filled with love and attention is what makes a Pit Bull thrive.

Pit Bulls can be dog aggressive which is no surprise given their history and this trait often emerges near sexual maturity. A dog that seemed fine with other dogs suddenly becomes reactive toward other dogs of the same sex, housemates or any other dog for that matter.

Adult Pit Bulls should never be left unsupervised with other dogs. Pit Bulls may exhibit "prey drive", leading them to "stalk" smaller animals such as cats, rats, chickens, livestock, or other pets.They are excellent escape artists and it is imperative that the owner be aware of this and take necessary precautions to prevent escape. These dogs are intelligent,  enjoy training which makes them good candidates for activities such as agility, obedience and Frisbee.

As an owner of the Pit Bull you will need to have strong leadership skills, be able to read your dog’s  body language to help you recognize signs of tension between housemates. You have to be prepared to separate dogs if tension develops. You need to know what “pushes”  your dog’s buttons and you need to have control of your dog under any circumstances. Does this sound daunting? The truth is that these skills are needed for most dog breeds but because of their unfortunate reputation you as a Pit Bull owner owe it to your dog to be the best ambassadors for the breed that you can be!

Like most puppies Pit Bulls love to chew and some enjoy digging. If they are bored, they will find a way to entertain themselves. A bored dog is a destructive dog so make sure that you have time to exercise your Pit Bull's body and to stimulate his mind.

Early socialization and training--and lots of it--are non negotiable and should be ongoing throughout your Pit Bull’s life Pit Bulls are very powerful, active animals who must be taught how to act around both people and other animals. Apartment living is not well suited to this breed as they will often personify the proverbial “bull in a chinashop.” 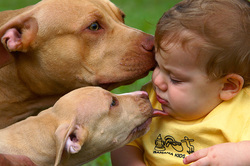 It is important to find a dedicated and ethical breeder who will only produce the most sound, stable puppies .In the past, responsible and reputable breeders would cull and dogs that showed any reactive behaviour towards humans. Unfortunately, due to 'bad owners' and 'bad breeders' this was not always done, resulting in the Pit Bull being labelled as a dangerous dog and banned in certain countries and municipalities due to bites to humans.

Avoid  the well-intentioned, but uneducated  "backyard breeder" and pet shops. You WON'T find ethical breeders in want-ads, or "Pit Bull Puppies For Sale" over the Internet sites, Breed magazines, dog  publications and you should only purchase from a registered breeder and ensure that the breeder does not advocate dog fighting. Also please consider getting a dog from the Pt Bull Rescue Association and also ask them for the name of a reputable breeder.

4.       Which other breeds are most compatible with the  Pit Bull?

Although the Pit Bull is not generally recommended as a companion to other dogs, they  can get along well with other animals with proper management and supervision and with early and continued socialization and with the correct, experienced owner. However, bearing in mind that they were bred for fighting, a Pit Bull is best kept as an only dog. They adore their owners and very often having a 2nd dog in opposition will cause resource guarding of the owner, resulting in aggression. Very often the dogs will get on well until the adolescent period where status assumes more importance and then fighting can occur and more often than not, one of the dogs will have to be rehomed.

Same-sex aggression may present with two bitches  and even between two males.
in general same-sex households are not a good idea and nor is getting two or more dogs from the same litter.  As above, we recommend that this is an ónly' dog in the family, but extensive socialization, from 8 weeks and ongoing is required.

As mentioned previously  the Pit Bull may show dog-directed aggression, but sensitivity to other dogs will depend on each individual. A well socialized and trained Pit Bull should never initiate conflict but if they are challenged do not expect them to shy away . Pit Bulls can and do interact peacefully with other dogs and animals .Individual dog temperament, early training, socialisation and good management skills  play an important role in determining  whether or not a Pit Bull is capable of getting along with other animals. However, they may appear to be social with other dogs in social situations, but having another dog in the home is not always tolerated. Although there are situations where the Pitti gets on with other dogs in the home, we suggest that this is an 'only' dog - must receive early and continued socialization with other dogs however.

Occasionally Pit Bull Terriers have difficulty distinguishing small pets from chew-toys. They are a very playful and energetic breed  and love to chase, chew, and toss. If they are not taught that small animals such as chickens and rabbits are pets to be respected, they may kill them accidentally.

Grooming for the Pit Bull is relatively easy and fuss free.. They have a short, smooth coat and you will need to brush your dog about once a week to prevent excess shedding. You will also need to clean your dog’s ears regularly and trim his nails. In this regard they are very low maintenance dogs!

A recurring theme in this article is that of socialization. Ensure that you enrol your puppy in a reputable puppy socialisation class as soon as possible. Progress to domestic obedience and if you are adventurous enrol for a dog sport such as agility. Your dog will love you for it!

Health concerns that have been recorded include  hip dysplasia , patella (knee) problems, thyroid dysfunction and congenital heart defects. Pit Bull Terriers with lighter coat colors may have a higher occurrence of skin allergies. Good breeders are continually striving to eliminate these health concerns.

“In today’s age, with the rising cost of veterinary care, it really is a wise decision to consider medical insurance for your pets. Depending on the plan you choose, you can ensure that if your pet does develop one of the health issues the breed is prone too, that you will be covered –additionally, just knowing that any accident your pet may have will be covered, will out-weigh the monthly insurance fee for most pet owners. Our own personal choice is Genricpet as they have a ‘no limit’ policy and their rates are comparable to the rest of the industry. To find out the questions and things to look for in a Medical Insurance, please just follow this link”
9.       Life expectancy.

The average life expectancy of  Pit Bull Terrier is twelve to fourteen years.

These dogs love everyone, be it a family member, friends or strangers on average. They are especially good with children - sturdy, energetic, and tolerant, they make ideal playmates, however older children are better as the dog does not know its own strength and especially when younger, tend to jump and bounce around. All children must be shown how to interact with dogs and no rough play under any circumstances.

It is also recommended that small children not be left alone with them, but more because the Pit Bull doesn't know his own strength and may accidentally knock the child down.

If you want a dog who... A Pit Bull Terrier may be the breed for you!

If you are not keen on


A  Pit Bull Terrier may not be for you.

"According to rigorous testing by The National Canine Temperament Testing Association, the golden retriever, poodle, border collie, English setter, German pointer and numerous other breeds are considered more likely to become aggressive than Pit Bulls. The average score of the 122 breeds tested was a mere 77 percent, but Pit Bulls scored a 95.2 percent on these tests. (The best score possible was 100)

Not only have Pit Bulls scored extremely well on temperament tests, but they have been serving key roles in search and rescue efforts, excel in agility training and work nationwide as therapy and service dogs.  Being intelligent, athletic dogs, Pit Bulls excel in many dog sports, including dog agility, fly ball, lure coursing, and advanced obedience competition. Out of the 25 dogs who have earned UKC (United Kennel Club) "superdog" status (by gaining championship titles in conformation, obedience, agility, and weight pull), fourteen have been American Pit Bull Terriers.

The American Pit Bull Terrier is a working dog, and is suitable for a wide range of working disciplines due to their intelligence, high energy, and endurance. In the United States they have been used as search and rescue dogs that save lives, police dogs performing narcotics and explosives detection, Border Patrol dogs, hearing dogs to provide services to the deaf, as well as general service dogs.[1]"
Source : y [2] http://pitbullcenterfolds.org/pit-bull-misconceptions.html 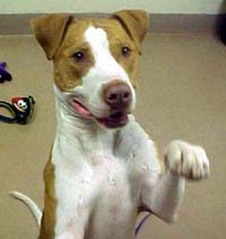