Dogs Can Classify Complex Photos In Categories Like Humans Do 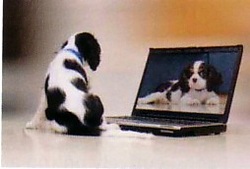 ScienceDaily (Nov 29, 2007)  - Like us, our canine friends are able to form abstract concepts. Friederike Range and colleagues from the University of Vienna in Austria have show for the first time that dogs can classify complex colour photographs and place them into categories in the same way that humans do. And the dogs successfully demonstrate their learning through the use of computer automated touch-screens, eliminating potential human influence.

In order to test whether dogs can visually categorize pictures, and transfer their knowledge to new situations, four dogs were shown landscape and dog photographs simultaneously and were rewarded with a food pellet if they selected the dog picture (positive stimulus). The dogs then took part in two tests. In the first test, the dogs were shown completely different dog and landscape pictures. They continued to reliably select the dog photographs, demonstrating that they could transfer their knowledge gained in the training phase to a new set of visual stimuli, even though they had never seen those particular pictures before. In the second test, the dogs were shown new dog pictures pasted onto the landscape pictures used in the training phase, facing them with contradictory information: on the one hand, a new positive stimulus as the pictures contained dogs even though they were new dogs; on the other hand, a familiar negative stimulus in the form of the landscape. When the dogs were faced with a choice between the new dog on the familiar landscape and a completely new landscape with no dog, they reliably selected the option with the dog. These results show that dogs were able to form a concept i.e. ‘dog’, although the experiment cannot tell us whether they recognized the dog pictures as actual dogs.

The authors also draw some consclusions on the strength of their methodology: “Using touch-screen computers with dogs opens up a whole world of possibilities on how to test the cognitive abilities of dogs by basically completely controlling any influence from the owner or experimenter.” They add that the method can also be used to test a range of learning strategies and has the potential to allow researchers to compare the cognitive abilities of different species using a single method.

The above story is reprinted (with editorial adaptations by ScienceDaily staff) from materials provided by Springer (2007, November 29). Dogs can classify complex photos in categories like humans do. AND ScienceDaily from http//www.sciencedaily.com-/releases/2007/11/071128105543.htm