(This is a great site with a wealth of health related articles on dogs and humans, worth a visit - enjoy!) 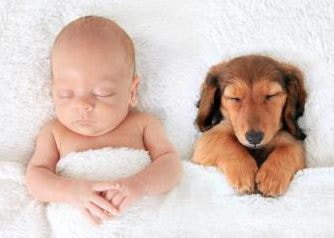 New research highlights the benefits of having pets around the house during childhood, after finding that early-life exposure to furry animals may reduce the risk of developing allergies and obesity.

New research suggests that early-life pet exposure could lower the risk of allergies and obesity.Led by researchers from the University of Alberta in Canada, the study found that children exposed to dogs, cats, and other furry pets in early life - before birth and up to 3 months after - experienced significant increases in two beneficial gut bacteria: Ruminococcus and Oscillospira.

Previous studies have linked Ruminococcus to a reduced risk of childhood allergies, while Oscillospira has been associated with a decreased obesity risk.

​Study co-author Anita Kozyrskyj, of the Department of Pediatrics at Alberta, and colleagues recently reported their findings in the journal Microbiome.

According to The Humane Society of the United States, around 79.7 million households in the U.S. own at least one animal, with dogs taking the top spot as most popular pet.

Our four-legged friends undoubtedly bring us joy and companionship, but studies have shown that their benefits do not end there, particularly for children.

One study reported by Medical News Today last year, for example, found that dog exposure in the first year of a child's life was associated with a 13 percent decreased asthma risk in later childhood.
It has been suggested that such associations are down to changes in gut microbiota - the population of microorganisms in the intestines - as a result of exposure to bacteria from pets.

To find out more about how pet exposure in early life might influence the gut microbiota of children, Kozyrskyj and colleagues analyzed data from the Canadian Healthy Infant Longitudinal Development Study (CHILD) cohort, including 746 infants who were born between 2009 and 2012.

As part of the study, the infants' mothers were required to report any household pets owned during the second and third trimester of pregnancy, as well as 3 months after birth.

Fecal samples were collected from each infant around the age of 3 months and analyzed to determine the abundance of specific gut bacteria.

The researchers found that infants who were exposed to furry animals before and after birth demonstrated a twofold increase in the abundance of Ruminococcus and Oscillospira in their guts, compared with infants not exposed to household pets.

These findings remained even after accounting for three factors that can influence an infant's gut bacteria: delivery by cesarean section, antibiotics during birth, and limited breast-feeding.

Furthermore, the team found that pet exposure prior to birth appeared to reduce the transmission of vaginal group B strep (GBS) from mother to child during delivery. GBS is associated with sepsis, pneumonia, and meningitis in newborns, although GBS infection can be prevented through intravenous antibiotics during pregnancy.

Could there one day be a 'dog in a pill'?

While further studies are needed to gain a better understanding of how early-life pet exposure affects bacterial populations, Kozyrskyj and team believe that their findings support previous studies showing that household pets can benefit children's health.
The researchers write:

"[...] exposure to pets increased the abundance of two bacteria, Ruminococcus and Oscillospira, which have been negatively associated with childhood atopy and obesity.
"[...] In addition, our finding of reduced streptococcal colonization with prenatal pet ownership may lower the risk for childhood metabolic and atopic disease. Further research is needed to link the pet-related microbiota changes with health outcomes of infants in the CHILD cohort, as well as in other populations."
​
The researchers say that it is too soon to make conclusions about the new treatments such research could bring, but Kozyrskyj believes that a 'dog in a pill' could be feasible.
"It's not far-fetched that the pharmaceutical industry will try to create a supplement of these microbiomes, much like was done with probiotics," she says.