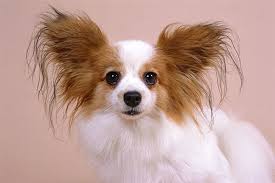 According to the FCI, this lovely little dog originated from Europe, especially France, Belgium and England. The Papillon can be seen in many works of act going back to the 1500's. Some of the famous artists that featured them in their paintings are Tiziano, Vicelli, Paolo Veronese, Gonzalves Coques are among the few better known artists. A Papillon is clearly shown in a painting of Louis XIV and they featured in many paintings of merchant class families.

However, there are others that believe that this breed originated in China, who had a similar looking little dog that became the modern day Pekingese.

Papillon means 'butterfly' and the dog was given this name due to the butterfly-like look of the long fringed hair that appears on the ears. It is also known as the Continental Toy Spaniel and is one of the oldest of this breed.

They were originally bred to be ratters in order to rid homes of pests. However, they were too small to actually kill the rate, so they would bait the rat and tease it until it became too exhausted to fight back, and then the dog went in for the kill.
​Is this the right dog for you?

Although this lovely little dog may look like the perfect lap dog - think again! Yes, they love cuddling up on laps, but only after they have had a nice long walk or been played with, or even done some agility, at which they excel. If you dont follow through and give this lhigh energy little dog the exercise it needs, it will end up entertaining itself, often by way of barking and/or being destructive.

As with all dogs that have prey instincts, we find that bringing in the Flirt Pole is a great way to keep them exercised and happy, as well as supplying mental stimulation in the garden.

This is a great dog for a first time dog owner as the breed is easy to train and loves to please its owner. When it has had enough exercise, it is happy to cuddle up next to you and have a nap.

What often happens with small breeds is that owners do not take them to puppy training and ongoing socialization, with the result they often lack the necessary social skills and can be aggressive and snappy to both people and dogs. A big mistake that owners of small dogs often make, is that they carry the dog around far too much - this just makes for behaviour problems, and because the dog is 'higher' up than other dogs, it will often exhibit aggression to them.

This is very much a 'people' dog and it needs people around it. To leave it alone will only lead to behaviour concerns. As this dog does love to be around people, we do recommend that Alone Time Training is started as a pup and kept up. Also, do not give too much attention, keep a balance.

A point to bear in mind is that this is one of the breeds that do not do well with anesthetics, so do discuss this with your vet.
. 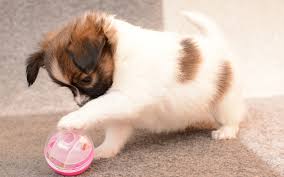 
On average, and if well bred the Papillon, does not tend to be aggressive to other dogs, however you must make sure that your dog has been well socialized so that it will accept another dog into the home.  The Papillon can be bossy towards other dogs in the home, even if bigger than itself.

On average they do, however, with all dogs, getting the dog from a breeder who has made sure the temperament is good, plus puppy socialization and on-going socializing will help to turn this little dog, called after the Butterfly in French, into a real social butterfly!​
Do they get on with other animals?

If introduced to cats and other small animals as a pup, the relationship can be good. However, remember that this dog has a high prey drive, so supervision is needed and keep an eye on the situation - when another animal runs, it can trigger the prey drive.
​Are they good with children?

On average the are very good with kids, however little children are really not suitable, especially when this dog is a pup as it can be hurt very easily. With all dogs it should be socialized with children from being a puppy, but under strict supervision, and then continued socialization should be undertaken. All children should be taught how to approach and interact with a dog and how to treat them with respect.
Health

In addition to possible injury from being such a small breed, like most small breed dogs, dental issues are often a problem. Other than that hereditary eye disease, including cataracts can be found. A common concern is luxating patellas, which not only is very painful, it is very expensive to have corrected.