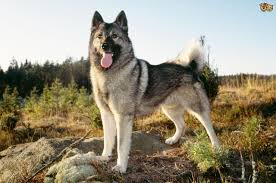 This is an ancient breed going back to approximately 4000 - 5000 B.C and originating in Norway. It was bred to be a hunter and has fantastic stamina which was needed to cope with the sub-acrtic climate. This dog was known to be fearless (and still is) and was used to hunt bears which were found in the area in those days. It is a beautiful looking dog, with a definite wolf-like appearance and is the National Dog of Norway.

As the bear became less common, it was used to hunt elk - which Amercians call the 'moose' and in Norwegian 'elg' means moose. So it could be that this dog was known as a moose hunter and not an elk hunter.

It was also used to hunt a large variety of other game due to its exceptional hunting abilites, which include scent, sight, hearing and mental and physical prowess. Other animals it was used to hunt are the mountain lion, badger, fox, raccoon, rabbit, lynx and even wolf.

As time went by and there was less hunting undertaken, this breed became a very competitive show dog, a wonderful watch and guarddog, sled dog, pack dog, and most importantly, a valued, loyal and loving family companion dog.

This breed can also be full of fun and are well known for their intelligence and their empathy towards their people - picking up on emotions and comforting their owners when needed.
​Is this the right dog for you?

These are stunning dogs, but the first thing to consider is that can you give them enough exercise and even when exercised can you handle their natural, rambuscous behaviour? Their exercise requirements are very high, and it is estimated that at least an hours exercise per day is needed. As this dog was bred to hunt, it is not a good idea to have him off lead in an open area. They do need to run, so look for a place that is well fenced so that they can have a good gallop around.

When it comes to training, like most dogs that were bred to think independently, they can be difficult. An experienced owner is the best bet, and positive reinforcements are the best, especially as this dog can be very strong willed and at times even dominant. Once basic training has been achieved these dogs do very well at obedience work and also agility - due to their intelligence they do need mental stimulation.

They can be rather aloof with strangers, but are not known to be aggressive, rather protective and territorial, so puppy socializing is necessary as well as on-going socialization.

This breed is very vocal, it is part of their natural behaviour as once they cornered their prey, they would run back and forth barking to keep the prey at bay and also alert the hunter. Combined with the barking, they have a very high pitched bark and the two do not always make the best combination! Teaching the 'bark and shush' exercise from puppyhood and keeping the skill in place may help with the barking.

A problem with this breed is that if not sufficiently mentally and physically stimulated and if left alone is that it often develops separation anxiety. To avoid this, teach the Alone Time exercises when young and keep in place, and ensure that you supply enough mental stimulation.


They do shed, especially during the twice annual main shed, so may not suit a houseproud home that objects to hair around. 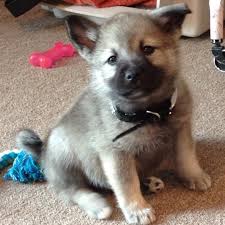 
This breed can be aggressive to same sex dogs, however if raised with other dogs in the home as a pup, it should get on well. You must make sure that your dog has been well socialized so that it will accept another dog into the home. They are prone to be territorial and possessive, so resource guarding could be a problem and steps should be taken to avoid this happening.

When it comes to which sex get on better, your best bet is one male and one female (both sterilized). Never two females. The vast majority of the time two females will get on well until about 8 - 9 months of age and then fighting for position tends to occur. When males have the odd altercation, it tends to be over quickly, but with females, it just intensifies and often the only solution is for one of the females to be rehomed. This is not just for this breed, but in general. As this breed does tend to be aggressive with same sex dogs, rather ensure that one male and one female as a safeguard.

On average this breed in not 'aggressive' but do tend to be dominant in general, as such but care should always be taken when introducing them to strange dogs especially same sex adult dogs. They are also possessive and territorial so any introductions are better done away from the home environment and with no resources around that the dog may value.

If introduced while the dog still is a puppy, this breed will normally accept cats in the home, however the cat next door will be another story altogether!  Considering their long history as hunting dogs, however, introducing an adult Elkhound to a cat, bird or rabbit or can be a bit more difficult than it would be with another breed and one has to be very careful.

Elkhounds are good with kids but do bear in mind that due to its exuberant nature it could easily know both small children and older people over.

However, having said this, many breeders say that they are wonderful around small children and tend to be quieter, sensing that they could hurt them. There are plenty of stories of this breed protecting children and keeping them out of danger - such as the dog lying across the stairs so that the toddler cannot get to them, even though they were never trained to do this. As with all dogs, children must be taught how to act around dogs and to teach them with respect, and by the same token, dogs should be well socialized with children of all ages when they are pups and the socializing should be ongoing.
Health