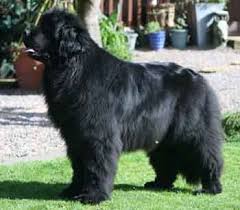 The history of the Newfoundland (Newfies) is unsure and the breed we know today originated from dogs brought over to England form Newfoundland (hence the name) in the 1800's.

This dog is well known for its working ability and was what was called a 'ships dog'. It was used for retrieving fishing gear that went overboard in error, taking ropes from one ship to another in the North Atlantic seas and also rescuing people. The breed became so renowned for its ability to perform water rescue that two Newfoundland dogs were a required part of the "equipment" on lifeguard stations along the coast of England.

Other uses were carting and sledding and as a pack animal, often pulling wood behind them that had been cut down,  due to its large size. Despite all of this, it is also known to be a sweet and loving dog and makes a wonderful family dog as long as you have the space for it!

It is said that author J.M. Barrie based the "Nana" in Peter Pan on his own Newfoundland.
​Is this the right dog for you?
​
First and foremost, you need to determine if you can handle such a large dog and have a home big enough to happily house it. This breed can easily bump both furniture and people over as it moves through the house! As this dog loves to swim and was actually bred too, having a pool or somewhere where the dog can go for a swim is always a bonus and makes for a happier dog.

They do not require excessive exercise at all, and are known to be couch potatoes, so do ensure that your dog does get daily exercise so that it does not become overweight. They can eat a huge amount, especially in their growing period from pup to adult.

They are major shedders and droolers and absolutely adore their families. Due to their protective nature, it is a must to take them for puppy socialization and further socialization. Training is also necessary so that you can control a dog of this size. This breed is intelligent and can be a bit stubborn and strong willed, due to their breeding where they made decisions by themselves. They also tend to be a bit slow due to their size - it may take a few moments after the Sit cue is given, before any action is actually taken.

They adore their family and this is not the dog to leave alone outside or alone for a long period of time. To do so will lead to stress and possible separation anxiety. It is a good idea to teach Alone Time exercises from puppyhood. 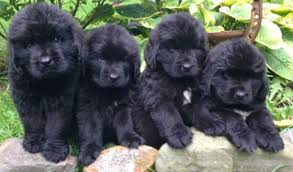 On average this breed  does not tend to be aggressive to other dogs, however you must make sure that your dog has been well socialized so that it will accept another dog into the home. The other point to bear in mind with this breed is that do you have the space for two of them?

​On average they do tend to get on well with other dogs. However, due to their large size, it is imperative that they go to puppy socialization and ongoing socialization, and that the equipment you use will give you full control over the dog as they are very strong.
Do they get on with other animals?

On average they do not have a high prey drive, although it is always a good idea to socialize when a pup to other animals. 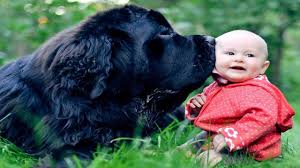 The Newfoundland really is a lovely, gentle giant who loves children. He's naturally gentle and friendly with them, as well as protective. Many fans of this breed say that his is a natural-born babysitter. However, dogs and children should always be supervised and all kids should be shown how to approach and interact with dogs and treat them with respect. Fans of this breed say the

Being a large breed dog, it is prone to bloat so do speak to your vet about this and do all you can to avoid it. Some of the suggestions are not to give excessive exercise 1 - 2 hours before eating, and at least an hour after eating. Dont let the dog drink vast amounts of wateer in one go, and it is said that lifting the feeding bowls off the floor will assist in preventing this condition. The breed is prone to serious health issues, such as SAS, epilepsy, Osteochondrosis Dissecans, and cruciate ligament problems.  Another area which gives rise to concern is that this breed can be sensitive to anesthesia and this should always be discussed with your vet before undergoing any anesthetic.