My female dog seems to have become aggressive after spaying

Friends of the Dog
​ 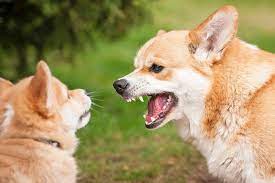 On average, spaying a female should help to calm her down, and result in more balanced and calmer behaviour.

When women are about to menstruate, many of us tend to become irritable, emotions go haywire, and stress levels can also increase due to the hormonal changes in the body – when a dog goes into heat, it too can experience fluctuations in hormones, and these can also result in irritability, lack of patience and so forth.  With some female dogs, it can even result in aggression towards other dogs in both the family and in general, especially any other female dogs that she may see as competition in finding a mate – at the end of the day, that is what the heat season in a dog is about – mating and reproducing.

Having the female spayed, should take care of the above, and also the chances of false pregnancies. Spaying also helps to prevent uterine infections and breast cancer, which has been found to be fatal in approximately 50% of dogs.

However there have been some studies that say some females do become more aggressive after spaying. With the female dog, this could be due to a decrease of both oxytocin and estrogen, which are believed to have a calming effect.

What should be checked as well, is to determine if the dog has any degree of pain in the area where the incision was made - is there any swelling or possible infection? Do the stitches look healthy? Feel gently around the surrounding area, carefully watching to see if the dog reacts when you touch a particular place - signs may be the dog getting up and leaving, turning away, ears going back etc. Also check the rest of the body to see if any pain is present, as often pain is a reason for aggression. Dogs do not always show pain the way humans do, so you do need to check to see if underlying pain, that is just not being exhibited in the body. If you believe there is, then go for a check up at the vet.

From our own observations over the many years we have been behaviourists, on investigation, it has been discovered that aggression was present prior to the spaying or neutering, just that it was of a very low intensity, and unless the owner had good knowledge of canine body language, the early signs may not have been noticed. If a female dog was aggressive before spaying, the odds are that she could become more aggressive after same – however, this is with a very small percentage of dogs.

If aggression is present in any form at all, your first step as an owner is to get in professional assistance in order to get to the root cause of the behaviour and receive modifications and tools to change the behaviour. This should be done as soon as the aggressive behaviour occurs, as the longer it is in place, the more the dog figures out that the behaviour works – is more likely to engage in it, plus it is so much easier to change before it escalates.

If your female dog was aggressive before spaying, and has become more so after being spayed, then your second step would be to talk to your vet about this aspect, and see what they recommend.