Louise runs a wonderful Puppy & Training School in the Benoni area and is one of our Recommended Puppy Schools. Click here for info 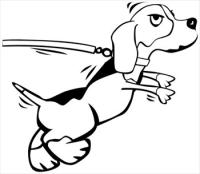 By far, one of the most common behaviour problems that dog trainers are asked to address is leash-reactivity. The normally calm, enjoyable dog that turns into a quivering, snarling, white-hot ball of canine terror at the mere sight of another dog on a walk. Owners of these dogs become members of the Midnight Walking Club, changing their walking schedules to avoid other dogs.

This behaviour appears in dogs purebred and mixed who were acquired as puppies from breeders and adopted from rescues. Leash-reactive behaviour does not discriminate by breed or background.

In spite of all the lunging, snarling, growling and barking, some of these dogs are actually quite friendly to other dogs when off-leash. yet, when they are on-leash and on a walk, they become the canine equivalent of Mr. Hyde. This is why the behaviour is more accurately referred to as leash-reactivity; the dog is reacting to something in the environment. Simply being attached to a leash does not incite aggressive behaviour.

There can be many causes for leash-reactive behaviours including genetics, lack of early socialization, a traumatic experience, or a series of negative experiences.

From the dog's perspective, his reactive behaviour is very effective. Because each time he does it, the other dog goes away. He does not realize that the other dog probably lives two blocks over and is on the way home. In the dog's mind, his behaviour effectively prevented a serious conflict.

Some high-energy dogs develop leash-frustration, especially dogs that regularly visit the dog park. These dogs learn that other dogs equally rowdy, partake in unchecked play sessions and have poor self-control. When they spot another dog, they prepare to launch into their normal rowdy behaviour, only to find themselves restrained by the leash. Their excitement quickly turns into frustration, which can manifest as leash-reactive behaviour.

What is not a common cause of leash-reactive behaviour is lack of exercise (despite the claims of a popular television show). In the vast majority of leash-reactive cases, the dogs are walked regularly. In one recent case, the dog was being walked four times per day for over 45 minutes to an hour each walk. While physical exercise is just as important for dogs as it is in humans, it cannot solve behaviour problems...in either species.

THRESHOLDS
Each dog's threshold, or "tipping point" is different. Some dogs may be able to walk past a dog on the other side of the street without reacting, while others will react from 100 yards away.

Once a dog is "over-threshold" he is no longer learning and the opportunity to train a different behaviour is gone.

Effective behaviour modification programs start by keeping the dog "under-threshold" or at a point where the dog is able to focus on the owner, and able to learn.

Punishment-based methods also require that the owner wait for the dog to exhibit the reactive behaviour. Not only is the dog not able to learn in this state, but he gets to practice the behaviour and the owner is now in a position of reacting to the dog's behaviour, instead of taking charge of the situation before it becomes a problem.

Desensitization is the process of exposing the dog to other dogs, or trigger, at a distance where the dog is "under-threshold" or not reactive. At that point, the dog is then taught an alternate, more acceptable behaviour, such as focusing on the owner. Little by little, the gap between the reactive dog and the strange dog is closed and at each stage, the alternate behaviour is practiced and rewarded. This puts the owner in control of the situation rather than reacting to the dog.

Some shelters and schools who offer remedial training (such as Paws Abilities) offer "growl classes" specifically for dogs with leash-reactive behaviours. The DS/CC process is practiced with a small group of dogs in a controlled, indoor environment. These classes give dogs owners skills they can transfer to the outside world.

Working individually with a behaviour consultant or trainer experienced in DS/CC methods provides the dog owner with a personalized training program for them and their dog.

In addition to learning the DS/CC process, a behaviour consultant "coaches" the owner, improving their handling skills and timing and providing support throughout the process.