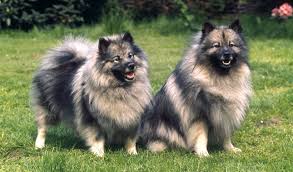 General
The Keeshond was named after the 18th-century Dutch Patriot, Cornelis (Kees) de Gyselaer and (hond), is the Dutch work for dog. Cornelis de Gyselaer was the leader of the rebellion against the House of Orange in the late 1700's. The dog became the rebels' symbol; and, when the House of Orange returned to power, this breed almost disappeared. They were originally used as watchdogs.

It originated in Germany, and its closest relatives are the German spitzes. Originally called the German Spitz, more specifically the Wolfspitz, the name was officially changed to Keeshond, in 1926 in England, where it had been known as the Dutch Barge Dog.

These dogs are known to be playful, quick learners and are good at both obedience work and agility. They are intelligent dogs, that tend to love people, and have been used as guide dogs for the blind - however, due to their smaller size, they are not used extensively in this genre. They are also used in Rescue to help to comfort, and at least one Keeshond, Tikva, was at Ground Zero on 9/11 to help comfort the rescue workers.

They make great family dogs, and it seems there is little that this breed does not do well.

If you are looking for a happy go lucky dog with average exercise requirements, then you can consider this breed. As mentioned above they can do just about anything required and are easy to train and love to do so. As with all training, only use positive reinforcement methods.

The one thing that may put you off this breed, is that they are known as barkers and have a very distinctive bark. This is due to their watchdog heritage and they were also used on barges on canals in Netherlands and middle Europe.  which is probably due to what they were originally bred for, so it is a good idea to teach Bark and Shush as a pup and have it on cue.

The breed is known to be very attached to their owners and there is the danger of them becoming 'velcro dogs'. Due to this it is very important to teach them Alone Time, right from being a pup and keep in place. Dont let the dog become over dependent on you, as the last thing you want is a dog with separation anxiety, especially one that is known to be a barker.

​These are clever dogs, so do make sure that you find ways to stimulate them not just physicall, but also mentally. 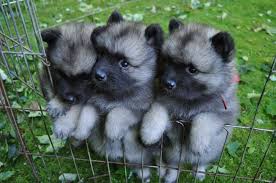 On average the Keeshond does not tend to be aggressive to other dogs and gets on well with them, however you must make sure that your dog has been well socialized so that it will accept another dog into the home.

On average yes, however they can be aggressive to same sex dogs. Your pup should always attend puppy school and keep up continued socialization. This will put in place a solid social foundation.
​
Do they get on with other animals?

On average yes, although it is always a good idea to undergo early socialization. 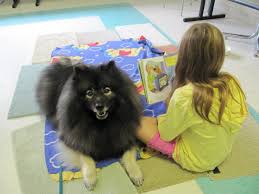 They love children and are excellent family dogs, however never just presume this, ensure that you do a lot of socialization with babies and children when a pup. Also children should be educated as to how to apporach, pat and respect all dogs.
Health

Overall, this is a very healthy breed. Though Overall, this breed is known to be healthy and congenital health issues are not common. The conditions that can be found are are  HD (hip dysplasia), luxating patellas, epilepsy, Cushing's disease, diabetes, primary hyperparathyroidism, and hypothyroidism.